This is what happens when you stop doing project 365, and then you no longer feel guilty when you blog less than once a week, and then life happens, and – you know… You post a short thing about the crap you lug around every day, and that was that. Thanks for all of you ideas, by the way, maybe I will get a basket or tote, or something. Maybe I will just re-organize myself and put things back in time, and then I won’t have to carry all that stuff around all the time. I also had this vision of making a giant tote bag with extra pockets for the laptop, all the gadgets, my giant thermos, and a used mug. The idea was great, and I could use the expandable tote pattern and Lisa’s laptop bag pattern from her book “the bag making bible” and mix the two. Right after I have finished making the skirt, and a couple of spindle bags and a Kindle cover. Which reminds me that I have dowels and toy wheels sitting on my desk that I had wanted to make into drop spindles.

But then this is the first day of fall break (which lasts a whole week, ahem), and we’ll ignore the fact that it’s only two more days until NaNoWriMo, and that I still have to read through the first part of the novel I’m supposed to write the second part of so that I can make a list of things that happened, and people I wrote about. It would be especially nice to remember the spelling of my main character’s name.

I’m also currently doing a self-imposed round of spinning workshops. I suppose things won’t get boring any time soon, which is a good thing. I did take a few more pictures that I haven’t shown here, so get something nice to drink, lean back and let me show you what I did: I got out my sewing machine and made “treadle booties” for my spinning wheel. When folded the treadles tend to knock against the wheel which then leaves marks in turn. Majacraft recommends wrapping the wheel in a towel but that’s bulky and tends to slip. My husband happened to run errands for once, and he remembered how much I love roses and got me these: I looked around for pretty things to take pictures of and these were on my desk. Trying to take another “artsy” picture, this is a table that my son arranged in his room. I got a surprise package that was all wrapped up in Mozart galleys: That confused me a bit because I have a friend who used to do research for the new complete edition of Mozart’s works, and that was what the package was wrapped in. It turned out that the package was a very belated birthday present that a knitterly friend had gotten for me in Scotland: It is the most amazing roving. It’s from sheep that live on the beach and eat seaweed. They have a dual coats and the soft layer is gorgeous and really soft, and special. I might have to learn how to dye fiber for this.

I also spent a lot of time and energy finishing knitting projects that have been sitting around for up to a year. First, a new sweater (pardon the sweat pants): Socks for my husband: A shawl (another Damson by Ysolda Teague made from Drachenwolle): Now on to my self-imposed (and self-taught) spinning workshop. I wanted to learn how to make really thin singles for lace because I have this gorgeous Blue Faced Leicester top that I want to make into a shawl. I started spinning from that top only to find that there is much to learn, and so I used something else I had sitting around. Here you see the fruits of an evening of spinning: After two nights of this I decided to learn how to chain-ply it on the third night: The pin in the picture above is a big pin but still, the yarn is pretty skinny. I know a lot more about spinning real thin now, I also think it might be a good idea to wait with the spinning of this until I can afford a lace-flyer and lace-bobbins. Not that they are a magic trick but I think they will make spinning lace yarn considerably easier.

I will go on and take pictures and post them here because I like it very much. I only stopped doing the “a picture a day”-thing because I have too many things I need to see to every day, and more often than not I was frantically taking a picture at 11.30 at night. Also my life is not very visually interesting, I sit at home all the time, and often when I do go out I forget to take the camera.

I promised my podcast listeners to post pictures of my stash. (And this is all of it by the way, nothing hidden, all out in the open.)

First the corner in my bedroom that holds all the crafting books and most of the yarn: Looking into those boxes: The biggest box holds sweater yarn, the medium one is mostly dk and sports weight, and the smallest one holds most of the sock yarn. Then there is the drawer that holds mostly the yarn of works in progress. Also, miscellaneous sock yarn, notions, fabric and interfacing. There is more fabric stash elsewhere, I have a box with 3 meters of canvas in another dresser, and a box with 3 meters of denim up in the attic. On top of the dresser is a plastic bag with yarn for a hat and mittens for my husband, and several pairs of socks in use together with the library books. (Since taking the picture the socks have been washed, I have installed a dirty socks basket, the hat has been knitted, and the rest of the yarn has been put into the drawer.) Then there is the small shelf above the bed that holds all my handpainted sock yarn. Also dictionaries. (You might note that there are way more dictionaries than sock yarn.) In my studio there are some bins with spinning fiber. There is also another, very small box that holds yarn and finished projects that I need to take pictures of for ravelry. Don’t panic, the yarn fits easily into the drawer in the bedroom. Looking at these I think that I might not have enough yarn in the house. What do you think? On Sunday while waiting for the train I was struck by the thought that I really need to make myself a Vine Yoke Cardigan out of handspun. I got obsessed with the idea and spent all of Monday researching fiber. I wanted something that was a natural chocolate brown. Not too short-stapled so that it wears well, not too robust so that it’s soft enough.

Today I got the box in the mail. This ball of fiber is huge, it’s 1 kilo (not quite 2 pounds). I also bought the pattern. I’m looking forward to this like crazy but I guess going by my usual rate I’ll probably finish this in August. Next year. A friend dyed this gorgeous merino for me, and I will knit her socks. I got this on Sunday and haven’t stopped showing it off since. 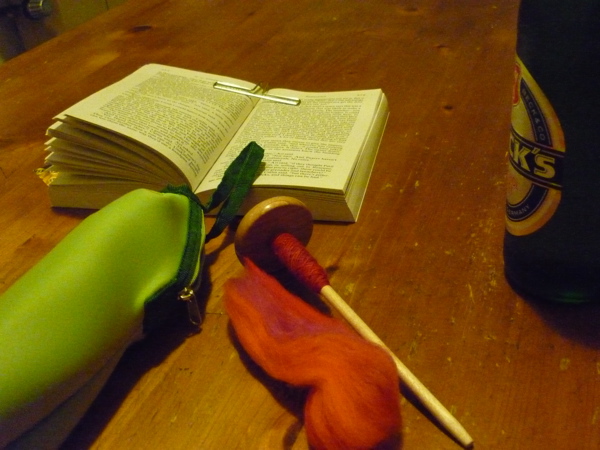 (Not spinning and reading at the same time but one after the other. And light beer this time.)