because I have been given a blog award. Winterkatze kindly presented it to me weeks ago, and only today did I read her post. As I usually did back in the days I tried to see where the award originated but I had to give up after being unable to find the relevant posts on several blogs. See, I was wondering why an award presented to me by a German book blogger had all these pictures of nail polish and shoes: 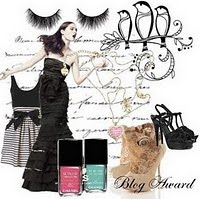 Well, I managed to follow it back to a couple of fashion bloggers but was unable to find it’s origin, sorry. Nonetheless there are of course rules to this award which are to tell you about ten things I like, and to name ten more bloggers for the award. I will gladly show you ten things I like but I won’t be tagging anybody, sorry, I have this feeling that I have done enough tagging for the moment.

I promise. Every day I think about my daily picture in the morning, at breakfast or so, and then I keep forgetting about it or pushing it back until I have to take yet another weirdly yellow picture. I have tried taking them with flash but that will make them look even worse. Also doing this has given me the sudden urge to get myself a nice digital SLR camera. I own one that’s analog, and as much as I like it I never use it anymore. I used to really like my camera but it can only do so much… Or maybe it’s me after all, who knows.

I usually opt for accurate memory of the day over artsiness so that may be a factor as well. Here are the last few days: On Wednesday I did a ton of stuff and went to IKEA all by myself. By car. I played “guess the right exit” being hindered by having a road map that’s about 15 years old and doesn’t show all those fancy new autobahns they have built since then. In the end I got there and back with a ton o new shelves and things, like you do. This is something for my “new” stereo (it’s one of many in our garage that have belonged to my late father-in-law). Ii all started with an offhand remark of mine that my speakers really are crap, after which a neighbor and friend of ours came over with huge, enormous speakers. I had to get rid of one of the smaller shelves in my studio for them. Then we found that the new speakers sounded awful with the amp I had, and my husband lugged another one over from the garage. The new amp (and pre-amp) didn’t fit into the old stereo’s home, so I got myself a new one. Came back home, had dinner, and put the thing together. Mind you, I had had my camera in my bag the whole day. More shelves. Thursday was the day I had a dental operation to have a titanium screw put into my lower jaw. It was actually less painful than I had imagined it to be but I spent most of the day sitting in my comfy chair watching old Fred Astaire movies (as far as I know there aren’t any new Fred Astaire movies, it’s just that I went on a “musical from the thirties”-binge while icing my cheek). Meanwhile my son pestered my husband hard enough to make him put together his new shelf.

A miracle happened. The day before my husband had gotten my son to help him tidy his room and clean up! For the first time in months (if not years) not only can you see the floor, it has been vacuumed as well. Instead of de-cluttering I opted for buying a new shelf and bins… On Friday my son and I went to the local library, and here you can see why he truly is my son. He even likes the same books I liked as a child. This pictures was taken while he started reading his first ever Dr. Dolittle-book. (He had read it all through by the next day, ahem.) Here’s my bonus shot, library shelves (yes, I know I have a thing with shelves this week): As you can see in the picture I took today, new stereo finally in place: It sounds magnificent, now I only have to get back into the habit of listening to music through speakers. These days I put everything on my ipod and listen to it while I’m walking but that doesn’t really work for all kinds of music, and I think I stopped listening to music because the sound was so awful before.

On a totally unrelated note, I don’t quite know what to do with the fact that a lot of you don’t understand a word of both my new knitting podcast and the accompanying show notes. Maypole alerted me to the fact that all she could (almost) understand of my last post was “click here” (well guessed by the way). If I start the show notes with some explanation in English the podcast looks a bit weird on itunes, like a German podcast with English show notes. Translating the show notes on the other hand is a bit peculiar as well since everything is out of context.

Anyway, the things I mentioned on the podcast – apart from what I’m knitting on right now – is modern sword fighting, something I took a class on some years back, that tries to merge medieval sword fighting techniques with martial arts training; NaNoWriMo, which I’ve written extensively about, a couple of knitting patterns, and the “World Wide Spin in Public-Day” website. Come to think of it, the only thing I linked to that’s in German is the sword fighting thing.

I hope mixing things up here on my blog doesn’t bother you all too much. Of course I could go and put my “pictures a day” somewhere else, and the knitting podcast still somewhere else but I’m not posting much as it is.

So please don’t get angry at me for posting in a weird language from time to time. See, there is dire need of a German knitting podcast. There are tons of them in English, and pretty amazing ones at that, but looking for a knitting podcast in German right now is like looking for water on the moon.

(And now I’m trying to imagine what it would be like to listen to a podcast in a language I don’t understand at all. I might have to try that out some time.)

I have been taking a picture every day (except for once) but I was not organized enough to share them here. So, instead of leaving you with a huge post with 13 new pictures loading very slowly I leave you with a short post with another slideshow (probably loading very slowly as well). I hope to present pictures in a more timely manner from now on. Here are my last two weeks:

I have gone on taking pictures for the project 365, only I haven’t posted them until yet. And here they are, we went camping, then back home, then off for a party (where my husband played with his new project for the first time), then back home, then we had guests, then we went to another party, and in between I finished spinning sock yarn. For now you’ll only get this as a slide show: I’ll be offline for a few days at least, maybe for the whole week. See you again after that. Oh, and wish us clear skies, please.

Another slow day for me. I almost managed to repeat my “sit in front of computer for the whole day”-stunt from a few days before but then I got a grip and washed yet another spinning sample, shopped for bread and tea, took a walk and, most important of all: Played “Shores of California” and improvised a bit on my piano. It’s sadly de-tuned again, all this rain – sunshine – rain isn’t doing it any good but still. I found a nice little pattern that one day might become part of a song. If I ever remember it.