And here’s another quick post to let you know that I still “aten’t dead”. (Well, unless I missed something terribly important.) I’m still firmly in the fangs of NaNoWriMo, something I might have to explain because people have been asking. NaNoWriMo is short for National Novel Writing Month. Of course it’s totally International by now, and so I’m able to participate even though I’m not American. Every year in November aspiring procrastinating writers gather round their computers and write 50,000 words on a novel. Each one gets to write his or her own novel, and the rules are that you have to start something new, that all of the 50,000 words have to be written in November, and I don’t remember any other rules right now. Nobody is going to read your novel, or publish it, it’s just that you write and write and write. For the 50,000 words to happen you need to write 1,667 words a day though I always tell people it’s better to aim for 2,000 because there will be days when you can’t write for some reason.

This year feels particularly hard to me but maybe it just feels that way now that I’m slogging through the words, was behind. I should be well over 30,000 by now and I only managed to crank my word count up to 28,429 today because I chained myself to the computer and didn’t let myself loose before having written for something like 2 1/2 hours (with additional breaks). The story is gathering momentum though so it doesn’t feel like I’m writing uphill all the time now. I remember that from years past, week 2 is always the hardest.

People always ask me why I do it. (To be fair, people ask me a lot of things, for example why I’m not skiing, so I’m used to this.) Well, it is a bit insane but there’s nothing but the feeling you get when you reach the finishing line with your 50,000 word first draft of an original novel written by you and can show off your winner’s certificate. To see how that looks go to this old blog post of mine.

The next thing people ask me is what I then do with the resulting novel. Ahem. So far I have had two of these sitting in a nice little drawer. Then last year I pulled them out again and read through them. Well, at least one of them. The first was so bad that I just couldn’t stand reading it again. The second one has potential. I’m thinking about editing it maybe when it’s National Editing Month. (There is such a thing but I don’t know how it’s called and where to find it.)

Anyways, everything is going fine, I was only wondering why I feel so tired all the time and then I remembered: a) I haven’t slept enough again, and b) I have been doing a lot of writing on top of my regular life, duh, that’s like, you know, work. And this year November has been a bit crazy with things I have to do and places I have to go, and then I haven’t even dusted for weeks. (I have great plans of cleaning today, and even going grocery shopping. Wow.)

As you know I’m also attempting to knit a sweater in the month of November, a sweater that I started five days late and then had to frog after the beginning but – it’s coming along nicely. While I have fallen a bit behind because there were three days in a row that I didn’t feel lucid enough to start the sleeves, and while I’ve been knitting on the sleeve cap for three days now (something I would have imagined to take about two hours or so) the sweater is two-thirds finished by now.

I think there will be another crisis on the weekend since I plan to go on a yarn excursion complete with meeting an online friend from Stuttgart on Saturday and there’s spinner’s meeting on Sunday, and I know from experience that while I always think I can write my quota in the morning I rarely do, and then get all cranky. But then, who knows, this is also the first year of NaNoWriMo that I haven’t written everything late at night. Mostly because I’m so tired in the evenings that all I can manage to do is stare blankly into space and maybe knit stockinette stitch in the round.

Okay, off to clean, my son will be coming home from school in twenty minutes or so. See ya.

Yes, I decided to do NaNoWriMo again this year. First I was all sensible and only wanted to use it to get back into a regular writing habit, and write about 500 words a day. And finish a story I had started in June. Then I thought that not starting something new was like cheating. And then I thought, “Well, I can try how many words I can write comfortably without stress during fall break, and then I can decide later.” And – I think I’m hooked again. For now it’s really enjoyable if a bit crazy, I have managed to write mostly in the mornings so I could do other things later in the day without having to live with the dread of unwritten words all day long. In the past I have often procrastinated until bedtime and then written in a very bad mood and very tired. 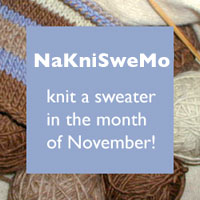