As you know I have a thing for bags, and I’m a bit obsessed with packing and especially with packing and traveling light. Which is also a little absurd because I don’t travel much. Take this year, for example, I was away for two days in April, will be visiting my parents at the end of May, and that will probably be it.

Still I love reading packing lists, and this is a topic where I even watch videos which I don’t usually do. I know, it’s a bit weird, but it doesn’t hurt anyone.

So I thought you might want to know what I took for an overnight stay to the Backnanger Wollfest. I went there by train, took two workshops, stayed one night in a hotel and went back home again.

When I thought about what and how to pack I knew that I would have to change trains (or buses even) three times each way, and that I would have to carry everything I had with me around all day on the second day. So I didn’t want to take too much stuff. Still I like to be comfortable, and I needed to take stuff for the workshops.

I’ve been completely mesmerized by minimalist packing for years now but then I decided that going all minimalist was not the right thing for me. It also seems that traveling with minimalist luggage means you have to buy a ton of stuff that you only use when traveling, and that’s just not practical when you never leave your home for longer than a few hours at a time.

So the first thing I decided that I would only bring spindles to the two workshops I was taking. For second one it said to bring a spinning wheel or spindle or both, and the more I thought about carrying my spinning wheel around for a day or so the more I didn’t really want to do it. Which is sensible but also a bit funny because when I go to local spinning meetings I carry my spinning wheel with me no problem. But then I know I only have to walk for fifteen minutes or so in total, and I only change trains once for that one. So first decision was no spinning wheel.

Since I was only staying one night I decided to wear the same clothes both days. I always wear my clothes two days in a row at home as well. I did feel a little uncomfortable about not having any spare clothes at first. What if I spilled something on me? What if any of my clothes ripped? Then I stepped down from panic mode, and realized that a) nothing like that had ever happened to me ever, and b) I was traveling to a German town on Friday and Saturday, so if there had been a clothing emergency I could have bought new clothes right there. Also it is possible to survive with stained jeans.

The weather was a bit hard to dress for, 8° C in the morning when I had to leave, and something around 25°C later in the day. So I dressed in jeans and handmade socks and a handspun hand knitted t-shirt and cardigan, both very lightweight, both somewhat warm because wool, and both completely suitable to be worn in weather that warm. I also took a (handspun handknit) lace shawl, fingerless mitts and a light jacket with a hood. And comfortable walking shoes, of course.

This combination worked very well. I was just a little too cold in the morning while waiting twenty minutes for the next train, and a little too hot right in the midday sun, otherwise everything was exactly right. 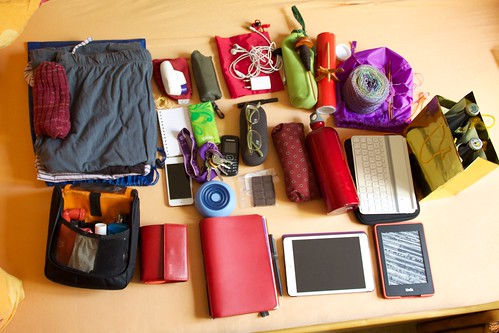 That backpack is the one I use all the time at home. It carries my groceries, and it goes hiking with me, and is just my general backpack. It holds 25 liters which is somewhat big for a purse but pretty small for luggage on trips. It is comfortable but not all that waterproof, and it could have better ventilation on my back. I like the outside pockets, and it has a laptop compartment that’s adequate but could be better padded at the bottom.

The picture is not quite correct because I ended up leaving the iPad mini and keyboard at home. 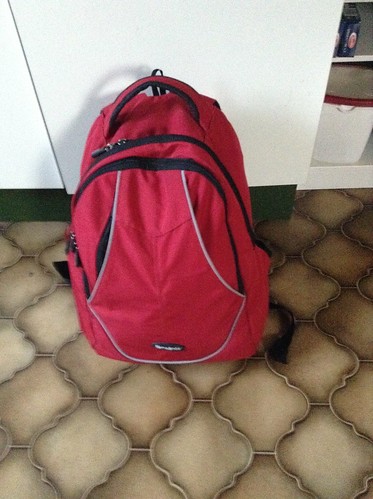 Doesn’t look too bad, does it? And it wasn’t.

I did weigh it but have forgotten how much it was, sorry. It got considerably lighter once I had given the two bottles of beer to the spinning teacher. I don’t usually carry beer around while traveling.

The whole thing was a raging success, and made me think that I might even be able to travel for a week or more with this backpack. The only downside was that there was not enough room to fit my jacket in. Everything else fit.

On the other hand I am thinking that having just a little more room might be nice as well. My „big“ backpack isn’t all that big, and I don’t really have to stuff it full. And usually I have the big backpack, and a smaller bag for the stuff I need on the train, and that is nice too. I can leave the big one at my seat when I go to the washroom, and the small bag at my feet on the train leaves more room.

I’m thinking about packing again because I will be leaving in two days to visit my parents for a week. At first I wanted to just take the small backpack again. But then I talked to my mother and she said we might go swimming, and we might ride bikes, and I found that it will be really warm for two days but less warm for the rest of the time, and I decided to take a second pair of shoes even though I don’t usually do that.

So I’ll take the bigger backpack again this time. Also the ukulele, some knitting but only one spindle…