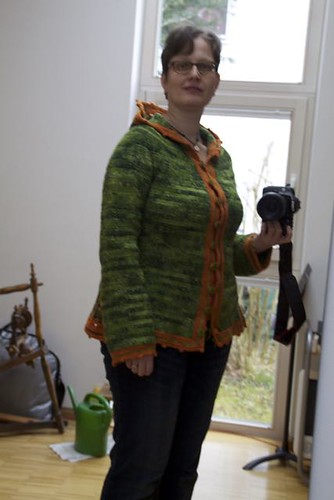 About two weeks ago when revising the novel of doom (and yes, I’m still not done after fifteen months) I read one of those “Oh no, everything is going downhill we’re doomed”-scenes that are mandatory in urban fantasy novels and found I had unwillingly inserted something funny.

Now the thing is while I think I am rather funny in person (not always on purpose), and while people have told me my podcast is funny (can’t imagine why) I was really sure that in my fiction there was no fun at all.

But then I was. All Buffy-like in the middle of an important and major fighting scene. Wham. Funny and ironic. Sarcastic even.

Decades ago I went to a music education congress in Cologne, and a guy said to me that he thought I was British. First because of my clothes (which I still don’t quite understand but I tried to dress as elegant and businesslike as I could), and second because of my sense of humor. It seems that sarcasm is something I do without thinking. I even met a friend in college who said he liked my sarcasm. I, of course, didn’t really know what he was talking about.

So it seems that Germans think that I have a British sense of humour. While I just think that I had to do something to lift myself above the dreary existence that is daily life in Eastern Westphalia. No,. despite what my husband thinks that is not a joke. There is a tiny bit of Westphalia that got chopped off some time ago, and now it is separate. Though united with “Lippe” (don’t ask me what that is in English) which nowadays is shortened to the unfortunate acronym OWL (for “Ostwestfalen-Lippe”). Of course Lippe is an abomination because people are all catholic there. ::shudder::

Oh wait. I was talking about being funny.

So.I never quite know how that works. Sometimes I say something that I think is common knowledge, and not unusual at all, and someone will think that’s the funniest thing. Sometimes I’m making a really good joke but nobody laughs, and there’s this really awkward silence. So I really never know.

I do know that I like to hear myself talking, and I always laugh at my own jokes but I also know that you’re not supposed to. If I were a real, sincere, artist person I wouldn’t love listening to my own podcast. I wouldn’t chuckle at every pitiful joke.

On the other hand I then think that maybe it’s a good thing I like hanging out with myself. I know one shouldn’t, a worthy person would be all humble, and “Oh, you’re so much nicer than I am.” And yes, most people are indeed nicer than me, still I’d love to hang out with myself all the time. The fun I could have! I could talk about the books I’ve read, and the projects I’m working on forever without boring myself. Brilliant! I could watch “Doctor Who” with myself, and we’d both sitting there, spinning along with a big grin of pleasure on our faces, and then we’d both drink the same beer and love it. I could have real conversations about everything that I find fascinating without my listener’s eyes glazing over which is a definite plus. (Try to talk to your 12-yo. son about your current spinning project, and you’ll see what I mean.)

Still. I’d love to be able to write something funny on purpose. Usually when people find me funny I’m just being myself.

And sometimes I think that I’m living in the wrong country, and that I would be happier in Britain. Well, at least I would know why I’d feel like a stranger there.

The thing is that I never really can tell if I just made a joke or not.

What about you. Can you be funny on purpose? Do you even want to?

It turns out that ITunes doesn’t like it when I put two audio files in one post, and only downloads the first one so this is the post for part two. (You can find part one here.)

The episode turned out so long that I had to divide it in two. So there is an episode 50a, and an episode 50b which can be found in the next post here. Enjoy!

Everything else I talked about can be found in the show notes to the respective episodes which you can find by looking in the „podcast“ category of the blog.

You know I read a lot of self-help and self improvement books, and am pretty much constantly trying to change things and myself for the better.

I am at a point where I feel my most important projects are stalling, nothing is moving, and so when we had a discussion on ravelry about how good it is to set precise goals, and hold each other accountable I jumped right in.

I hate failure. I bet all of us do. And my goals really were attainable. And yet I failed. Not in a „and then I got sick and had to miss a day“-way but in a „I wanted to make music for ten minutes five times a week, and I only touched my ukulele once“-kind of way.

In fact I started feeling that writing the goals down, and telling others about them made me less likely to succeed. Which goes against everything that is common knowledge. If you want to reach a goal you should break it down into small manageable chunks, and then you should tell everybody about it so you’ll be more motivated to actually do it.

As I said it feels as if that’s not for me.

Take losing weight. I managed to lose a bit when I stopped eating sugar (mostly) because I found my body wasn’t happy to digest that much fructose. Then I lost some more because I decided to drink way less alcohol for health reasons. And then I decided to eat just a little less still because I wanted to be able to walk uphill without feeling dreadful. (The first thing I did about that was exercise more, though, losing weight alone would have been rather pointless for that.)

I am totally against dieting (and it never works for me anyway), I know that it’s unhealthy, and I also know that only 5% of all people who lose weight will keep it off, and I know that being fat is neither unhealthy nor unattractive, and that things like exercising a lot, and getting enough sleep are much better ways to become (and stay) healthy but still – I decided to lose weight.

And I did, quietly so, without much fuss. My husband and son knew, and nobody else, and I made great progress. When I went out I basically ate as I used to, and when I was home again I’d go back to eating just a little less. I had to buy smaller pants, and was sure enough of myself to buy them just a bit too tight. (And right now they fit. With long johns underneath.) And sine everything was going so well I started telling people, „I am currently losing weight.“ And guess what happened?

I gained half a pound back.

Now part of this is due to the Christmas and New Year’s food extravaganza but part of it is for the same reason I never achieve the goals I publicly state.

What happens is this: When I state something like, „I am currently losing weight.“ or „I will be practicing every weekday.“ my subconscious thinks, „Oh, that’s alright then, already taken care of.“ and then it leans back and takes a nap.

The part of publicly stated goals that gets most people to succeed anyway seems to be fear of shame. They are afraid of what others will think of them if they fail.

In my experience other people couldn’t care less. I used to belong to a group of women who did the whole goals-and-accountability-thing every other week, and every time I said that was disappointed about how I failed to do the things I wanted to get done they would say, „But everything is fine! You worked so hard! It’s not your fault!“ But to me that was not the point.

I have also found that other people are often somewhat glad if I fail because if I can’t change things then they don’t have to as well.

So. It seems that after a long period of trying out and testing I won’t set goals publicly like that anymore.

Which still leaves me with the problem of how I get moving on the projects that I deem important. Any thoughts?