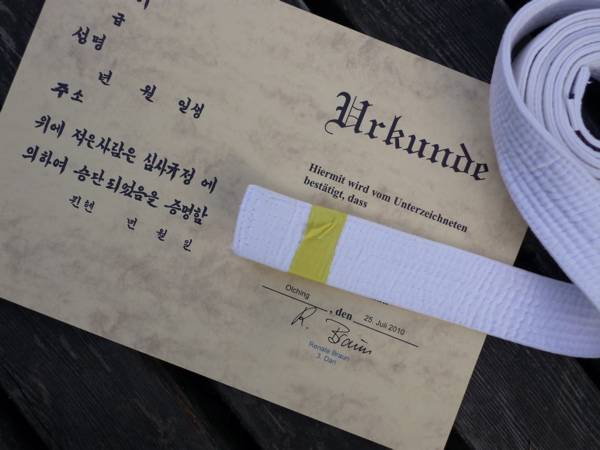 Since today my son is the proud owner of a bit of yellow sticky tape on his taekwon-do belt. I’m very proud.

Not major craziness, mind you.

Usually this would be the point where I publish my “Story of the Month” because it has been the only thing I have written this week. But it’s not really a story just the beginning of one, and so you’ll have to wait for that one.

So, I’m just popping in here to say that I’m still alive, that I have read through all of your blog posts, my laptop is still not back, and the house is looking awful.

Next week kindergarten will start again but teaching will not and I have high hopes of getting my life back then.

See you, and have a nice weekend.

Looking at herself in the mirror Myra thought about what to wear that night. It felt like a day for red. The red dress. The dress that made her look voluptuous, and curvy; the one that hugged all the right places, felt good, and was easy to wear. The only question was whether to go the vamp route this night or more punk-like. High heels or army boots? A hat?

She’d probably regret high heels later in the evening, she always did. She thought of putting a pair of flats in her handbag but that was for sissies. Boots and a leather jacket would tone it all down a bit.
She’d be overdressed either way. Though she wanted this to be the ultimate party it probably wouldn’t be.

But what better place to meet new people than a party? So she put up her hair, put on the big dangling earrings, the red lipstick, the red pumps, and went out in a cloud of perfume.

There weren’t that many people at the party when she arrived. She frowned; everybody came late the days until there was hardly any time left to party. She said hello to everybody, fetched herself a beer, and joined a group of people she didn’t know to make new friends. If possible.

There she was again, thought Laura. This Myra. Always the same. She entered the room like she owned it in her terrible clinging dress. Laura would never have worn something so tight, so short, so clinging, showing so much cleavage. Horrible.
Wherever this woman went there was a whirl in the crowd. Squeals, laughter, disturbance. She talked all the time, as if anybody was interested in her stupid stories, she went from group to group, on to the buffet, loading her plate with food, not waiting for anybody.

Laura was glad that she at least knew how to behave.
…

Phew, this is boring, Myra thought. Maybe it’d get better later when there would be dancing. Maybe.
So far there were a lot of familiar faces, and as usual, people were stiff and as mute as maggots. She already got tired of her own jokes.
She saw Laura sitting on the other side of the room. In the corner as always. Such a beige girl. Short beige hair, beige face, all her makeup in pastels, and wearing black. Again. That woman looked like she could use some fun. And makeup. Nice earrings though.
And, Myra thought to herself, I don’t know how she does it, already most of the men in the room are drifting towards her. Drawn in by the pale, obviously.

Well, at least I can choose whom I speak to, Myra thought, looking for the promising looking guy she’d seen earlier, going after him, isolating him from his companions, and dragging him on the dance floor. Dancing was always a good way to determine whether someone had potential. Or not.
This guy didn’t look that good on the dance floor. He slinked off as soon as he could. He didn’t like to dance; neither did anybody else. Apart from Myra, that is. So she went right to the middle to dance alone.

Laura barely heard what that huge blonde guy standing by her side was telling her. Despite the fact that he was practically yelling in her ear she had forgotten it the minute she heard it. The nerve that woman on the dance floor had. Starting to dance even though everybody was looking at her. How embarrassing. And she wasn’t even dancing properly. No, she had to twirl all over the place, waving her arms about and grinning at people. Laura shuddered. Suddenly she wanted to go home. It had been a mistake to come in the first place. It was boring. She just wasn’t the type for parties, parties were for outgoing, extrovert people not for shy people like her. Inwardly she cursed the friend who had persuaded her to attend. She should have known better. A party was not a good way to meet somebody new. She promised herself to go as soon as she could without drawing attention to herself. Then she would go home, despite what her friend would be saying, eat some dark chocolate, have a glass of wine, and watch “Singing in the Rain.”

Boring, boring, Myra thought. At least it was better to be bored while dancing than while standing around next to boring people making boring conversation. The others didn’t look, they never did. As if dancing were only possible without any eye contact at all. Nobody looked interesting. She had checked. Twice. She had even talked to the group of musicologists in a corner between the buffet table and the piano. Dull as dishwater.
There had to be exciting people somewhere in the universe but certainly not here. Should she stay a bit longer? There surely would be more people coming in later.

On a sudden impulse she picked up her handbag and jacket, found the host in the kitchen, told him a big story about how she’d love to stay, how sorry she was, and that she had to get up very early the next day, so sorry, great party, ciao.
She walked home all the way, through the drizzling rain in her spiky high heels. An hour later she opened her door, changed into her pajama and woolen socks, opened a beer and a bag of potato chips, and stayed up late to watch “Funny Face” with Fred Astaire. Just a short note to tell you that finally you can listen to me music again. You can find it under the “hear me sing“-category.

Excuse me, I’m going back to the keyboard for NaNo. If I can keep this pace up I’ll be finished by Sunday. Normal reading and blog-visiting will be resumes in short order.

I have been thinking about moving my blog. Which currently resides at

So you better visit me there.