Feels like I did nothing all day but that’s not true.

I did get up late and then forgot my thyroid meds which meant I had to wait for thirty more minutes before eating breakfast. No writing, no yoga, nada.

I did take the train to the next town over, went to two doctor’s offices, got my prescriptions renewed, went to the health food store, took the train back, went to the pharmacy, got all of my meds except one, went back home, had lunch, did the dishes, taught a student, went back to the pharmacy and to yet another health food store for the stuff I didn’t get before, came back home, scrolled through Twitter, practiced a bit of Chinese, waited for the boy for half an hour, watched „Star Trek:Enterprise“ with him, watched more Netflix, started writing this post and went to bed on time for once.

The Star Trek episode was another rather boring one. When we finished watching the „what happened before“-segment at the beginning of the show the boy turned around to me and said, „It’s as if we had watched a different show. That summary was way better than what we have seen.“ Well, if you take the most suspenseful moments from twenty episodes and cut them like that it does look pretty exciting.

I did lock out of Ravelry on all devices. It’s a probably pointless show of solidarity with those who can’t use the platform anymore when they retire the classic design today. I am planning to go back on Saturday because most of my online friends live there, though. Well see how I will be able to deal with the new design. I could potentially use the Ravit-app instead but I don’t like it as much.

Today I will run, work on the novel and the other novel read, crochet and watch ‚Torchwood‘.

Have a picture of yesterday’s lunch to inspire you: 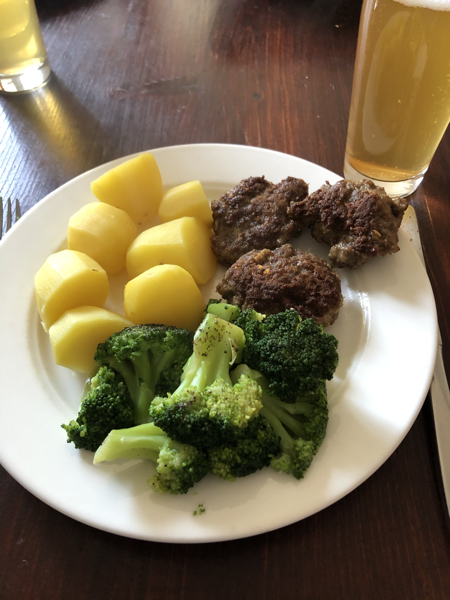 So I went to bed around midnight, didn’t get enough sleep and got up too late to do my usual morning things. And then I sat on the kitchen bench in my pajamas browsing Twitter for 45 minutes with bare feet. Yep. Dumb.

I did go on my run/walk, though and that was delightful: 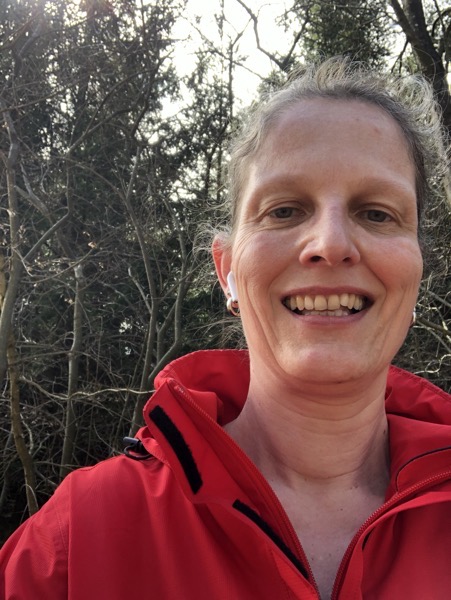 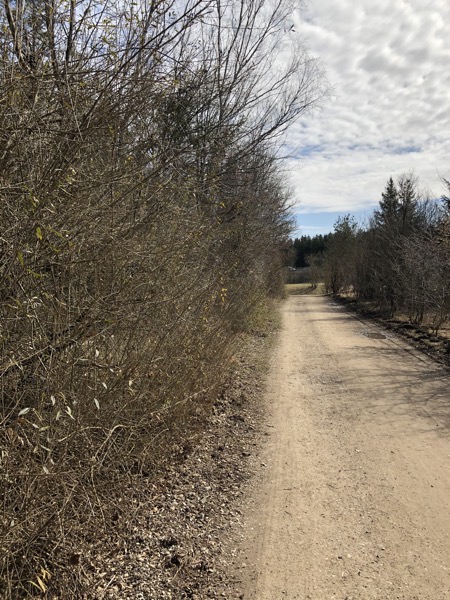 The weather was gorgeous and I didn’t meet a lot of people.

M husband made lunch while I showered: 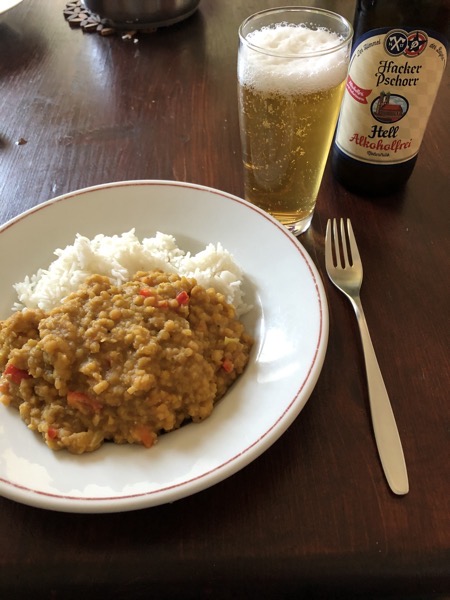 He wasn’t feeling all that good and barely ate. Seems the eggplant from the day before didn’t agree with him.

I spent most of the afternoon watching instructive YouTube videos and another video coaching thing. Which was helpful but not as productive as writing would have been. But lack of sleep, see above.

The boy and I watched the first episode of the second season of ‚Torchwood‘. It’s one of my favorite episodes with James Marsters. I finally did the dishes, watched another episode of ‚Find Yourself‘, managed to stop after one for a change and got ready for bed.

Today there will be a short train ride to the next town over. I will get several prescriptions renewed and visit the health food store there before coming back. I will teach one student in the afternoon and am hoping that I’ll have something to show for all my time at the end of the day.

I didn’t set an alarm but my watch still woke me up because it told me to stand up already. I woke up at 6.50. Thought, „Oh, I slept in!“ before realizing that with the time shift it was actually an hour earlier.

I got up, decided that it was too late to attempt yoga or anything else because my husband would probably get up at 8 as usual. (He did, and he forgot about the changing of the clocks, as usual.) We talked a bit, I started planning out the week, I called my mother on the phone and then it was time to cook our special Sunday lunch. We found that we didn’t have enough eggplant but made up for it with some bruschetta: 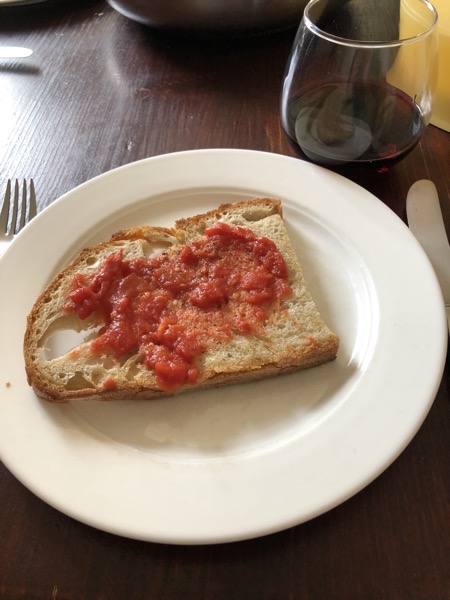 Very yummy. And we even managed to finish cooking on time. Here is our parmigiana di melanzane: 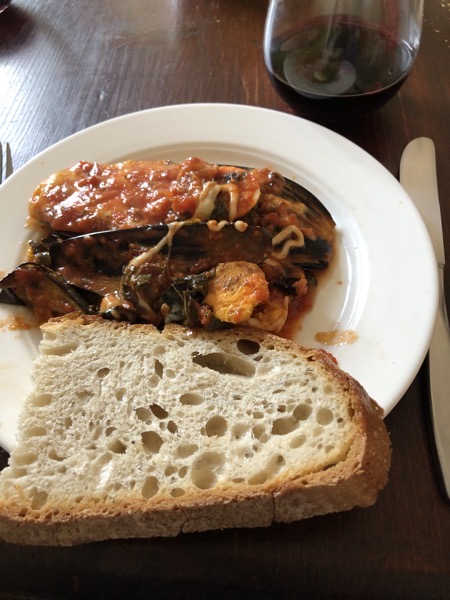 Husband is still in a somewhat bad mood, unfortunately. I can totally sympathize.

The boy and I talked about him going to university, which one to choose and how to enroll. I could help him with some google-fu. He will need to go to Munich because him living at home will be cheaper. He had tried finding the necessary information before but I am more experienced with both university and website navigation.

We did the dishes.

After that I took a break and finished reading „Headstrong“ by Eden Finley. I’m feeling a bit meh about the book. I liked the beginning and the ending but in between I almost abandoned the book mid sex-scene. I am not quite sure what to read next, I could continue „Crossfire“ by Lindsay Buroker which I like but don’t find all that gripping, read the first „Malory Towers“-book by Enid Blyton that I read over and over as a teenager in a German translation and just found again last week, or start „Mad about Ewe“ by Susannah Nix which sounds promising.

I watched a video about neuroplasticity and some other stuff, did two loads of laundry, played Duolingo and found that it was already time for dinner.

The boy and I watched another rather bad episode of „Star Trek Enterprise“. It’s sad, the whole thing could have made for a compelling story if they just had done it rather differently. We mostly stopped the show every five minutes or so to debate military tactics, physics and the art of story-telling. We looked up at least four things on Wikipedia, sometimes while the show was playing on. I even found myself telling the boy the story of how Mathias Rust landed his Cessna on the Red Square in Moscow.

I had a very lovely list for the day that included revising 25 pages of one novel and spending at least 25 minutes writing new words for another but somehow there never was time. I will have to change something today.

I then went on to watch another episode of „Find Yourself“ (because that’s apparently more important than writing or such things) and went to bed around ten.

Today there will be running, hopefully new words, yoga and some email and watching ‚Torchwood‘ in the evening.

In fact the all-day slump was so epic that I didn’t even start writing this post and now it’s Sunday morning and I want to do other things. I basically did nothing, my husband was feeling very low, the boy and I watched the last episode of ‚Eternal Love‘. So, here’s a bunch of pictures for you: 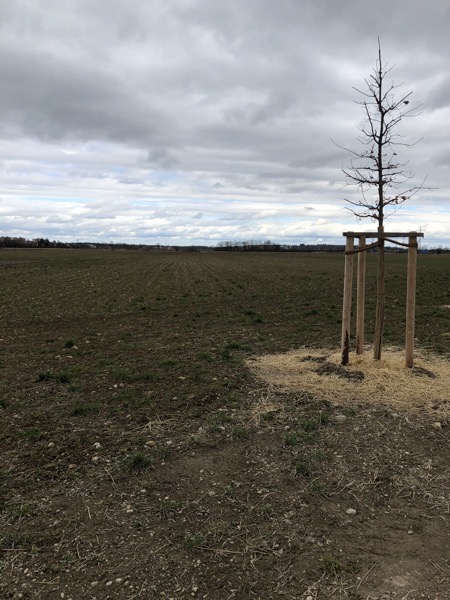 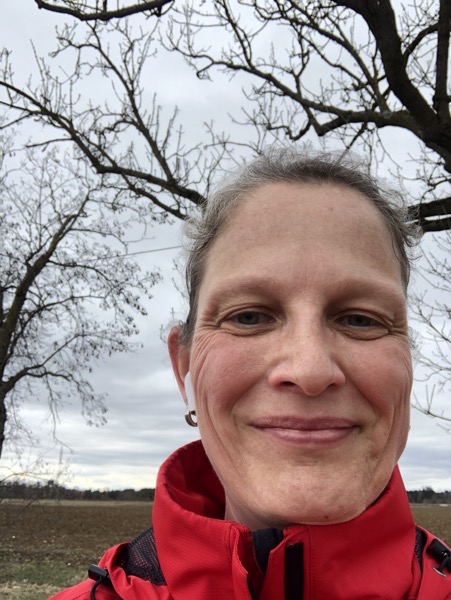 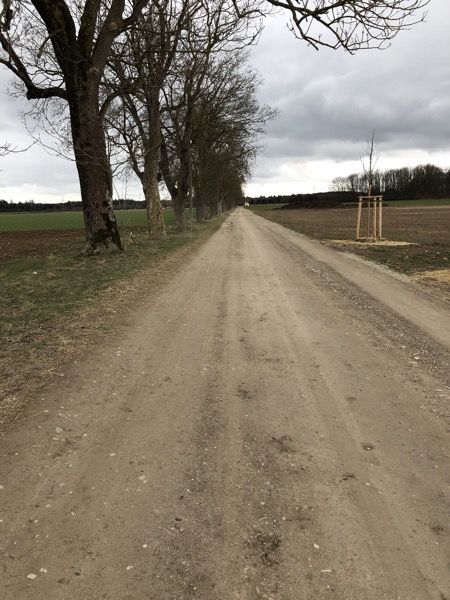 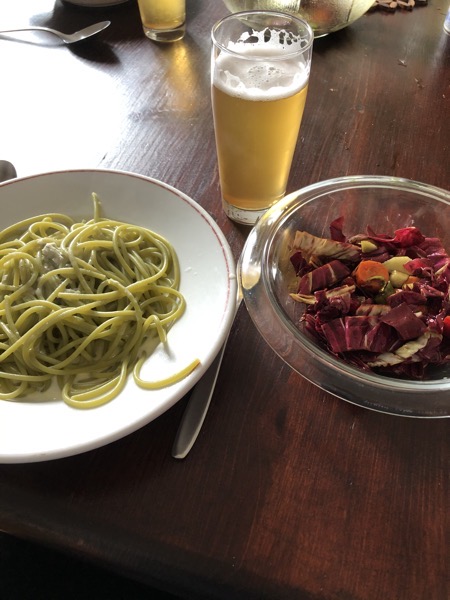 So I got my new glasses and I love them!

Woke up around six, rolled out of bed fifteen minutes later, did yoga, meditated for five minutes and didn’t have time for morning pages again. Made breakfast for me and the boy. He hadn’t texted me at 6.10 and so I went upstairs. I was relieved to see him already dressed and only later when he was sitting at the table did I realize that the creases on his hoodie meant he must have slept in his clothes. I hope he won’t make a habit out of falling asleep like that.

He talked to me about the video game he is playing and some things he had learned about tanks and torpedoes, as one does, and toddled off to sit in front of his computer for school.

My husband showed up and had breakfast and we talked while I was working on my crochet blanket. I am in the habit of reading the news about the ‚current situation‘ at that time and I maybe should stop that because these days it kills my mood and motivation completely.

I had plans of starting housework and cleaning early but got sucked into a discussion on Ravelry about fiction writing and marketing and that took me some time. I also felt sluggish and foggy. Just when I was about to start doing the huge pile of dishes from the day before I got a call that my new computer glasses would be ready at noon.

So I did the dishes, the boy helped a bit and treated me to another lengthy conversation. He ended up recommending me a YouTube channel for the third time or so and showed me this video:

By the way I told him that if he ever meets people who don’t exclaim, „Wow, how cool is that!“ when being offered a ten-minute video on how a rice cooker actually works they are probably not his kind of people.

Anyways, I didn’t get much housework done.

I went off to the optician just as my husband came back from his run. My new glasses look almost exactly like my old glasses. The process of getting them fitted was rather interesting, The optician first fitted them with me wearing my mask and then for the last two tries we went outside where I pulled my mask off briefly so he could see the fit properly. By the way, this is the riskiest thing I’ve done in months but he did wear a mask, we were outside and the whole thing probably took less than two minutes.

This is how my new glasses look: 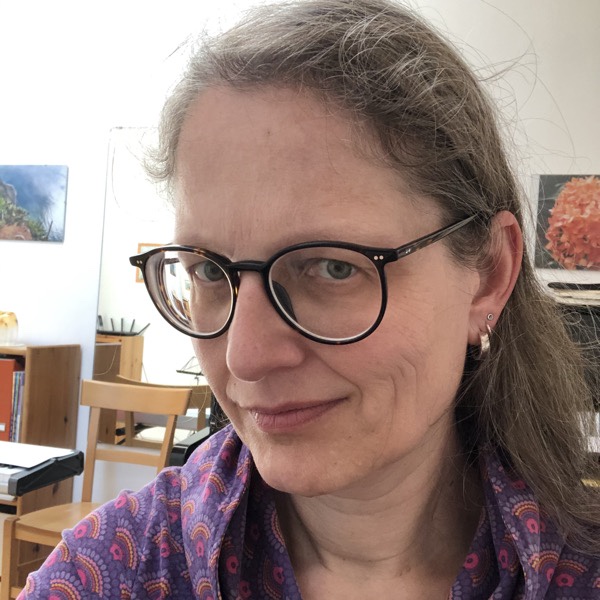 They do make looking at screens much easier, hurray!

Then I went back out to get takeout for lunch: 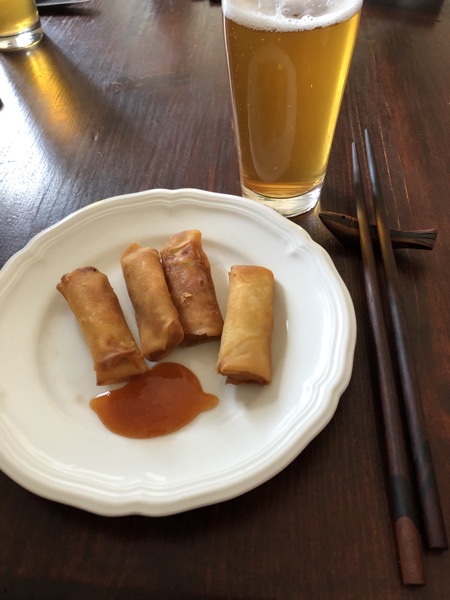 I also had fried noodles with chicken but I forgot to take a picture. It was extra yummy.

After that I finally cleaned the house, wrote an email to a potential new student, taught my third student of the day and started writing this post.

Today there will be running and I’ll plan the next two weeks and hopefully get some other things done as well.

I woke up after six, did yoga and meditated, had breakfast and that was basically it. The boy had to go to school and take a German test which made him rather grumpy. He has reached that phase where he calculates which classes will count towards his Abitur and he is very aware of the ones where he only needs a passing grade.

The house still smells like smoke, by the way.

I did the monster pile of dishes with my husband’s help and wove the ends on the crochet blanket in. I found that the workbook for Chinese characters I had ordered had arrived: 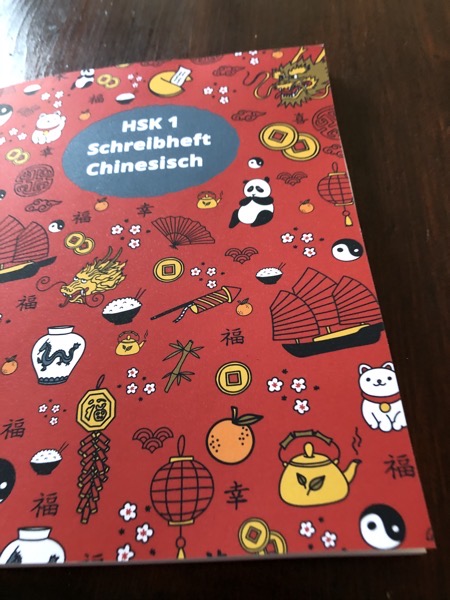 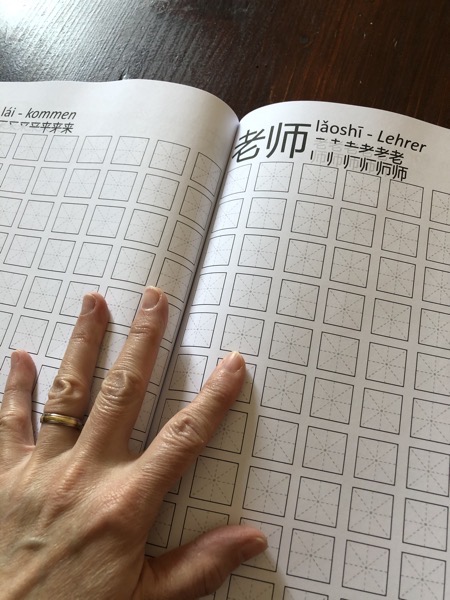 Then I went to the supermarket and bought all the food plus some nice flowers: 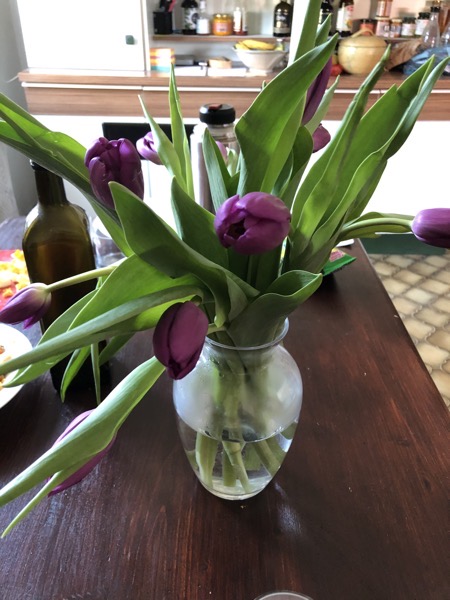 My husband made paella for lunch: 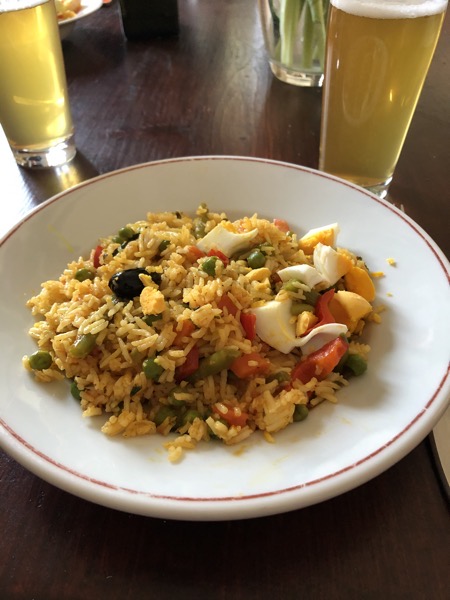 I talked with the boy until he remembered that he had to go back to school for PE. Fun times with soccer (not). I fell into an afternoon slump, read a bit and did not do the lunch dishes, boo! My first and third students canceled so I had a rather light teaching afternoon. I used the break to practice Chinese.

I taught a little longer than expected, my last student of the day had technical difficulties and so we started late.

Then I started writing this post, ate dinner, watched some Netflix, finally did those dishes and went to bed.

Today there will be the weekly cleaning of the house, the planning of Easter break, Chinese takeout for lunch and the watching of Torchwood in the evening. And then it will be Easter break, phew.