Remember my announcement? I’ll be hosting a private house-concert, where I’ll sing and play for invited guests. Beverages will be served:

Silent all these years 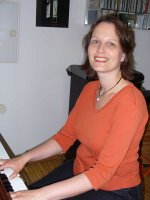 My place is near the Bavarian capital in Germany (that’s in Europe, by the way). Anybody interested might e-mail me through my blogger-profile or send a comment, and I’ll give details.

I’m starting getting nervous, although I haven’t even sent out the invitations yet. Some people have been reading the blog and told me they’ll be attending. I’ve been practicing the Tori Amos-songs I’m gonna play since the end of May (or longer). Last week I played them all through for the first time and – I’ll have to cut the programme. Right now it’s 18 songs lasting two hours. Afterwards I started playing one of my own songs. I thought they might mix with Tori Amos’, but no, sounds like a wholly different language. So there won’t be any original songs at the concert. It will be a tribute to Tori Amos. Though I’ve been quite good with the practicing, they don’t sound like I want them yet. I can’t play them by heart, so I have big wads of paper on the piano stand. And for the concert there probably will be the keyboard (not stand). What I need is something like a power point presentation of the sheets, maybe activated by a switch for my left foot. Which reminds me of my dilemma with the sustain pedal of the keyboard. It is not fixed anywhere. The last time I played it, I had to fix it with gaffer tape. And it kept sneaking away. That’s big fun: you’re playing the piano and singing, performing, and all the while you fish around for your elusive sustain pedal with your right foot. Very elegant and relaxed.

But I will have to use the keyboard, because: the piano is out of tune, the room with the piano is way too small, and when I sit at the piano the audience only sees my backside. Very communicative. Just think of it: a whole audience thinking, “I didn’t know, her butt was sooo big. Why is she sitting like that with half of her butt flowing over the piano stool?” Better be fishing around for the sustain pedal. Oh, and the piano doesn’t have an organ sound. Okay, gaffer tape and ruin the hardwood floor.

Maybe not wedding fever in the big scheme of things, but in my little life I have the feeling of weddings aplenty. First my husband’s cousin sent an invitation. “Lebensverpartnerung” which means a kind of gay marriage. This is not possible in Bavaria, where we live, so we’ll be traveling all the way to Northern Germany for this. I actually looked forward to it. They were early with their announcement, they chose a beautiful location, and they were considerate enough to marry during summer break.

Next, there’s my sister. They’ll be marrying as soon as possible, when would it suit us. My husband said emphatically “No sooner than August, please!” but since it’s their wedding, not ours, it will be held at July 7th. Nice date, but I’ll have to reschedule my busiest teaching day, and spend two days on travel. My husband and son will be staying at home, since this would mean two days of rescheduling for my husband, and I have the feeling that two days spent mostly traveling would be a little too much for a 3-year-old. And traveling without child will be easier for me, of course. (And that’s something I’m looking forward to, having four hours of time to myself on the train. I hope that I can write and read. But then there will doubtlessly be lots of noisy world cup fans on the train…)

So, as if there weren’t enough weddings already, last Sunday my son announced that he had decorated his room and was about to marry. He had put a lot of Lego “tiles” on the floor, built something that was meant to be a rocket, or maybe fireworks (appropriate for such a grand festivity). And he wanted to marry – his teddy bear.

It’s about time, since they have been sleeping in the same bed for years. I was a little concerned for the same sex marriage, but then maybe it’s all for the better, we’ll never have to worry about our grandchildren being pale yellow and furry. (Or even worse: only pale yellow.) I don’t know, whether he forgot about the ceremony or didn’t want us to attend, I’ll have to ask him.

I’ve been back again now for a couple of days, but was still too busy to post anything. Also it’s a little depressing that a lot of the traffic on this site is generated by poeple’s searches for something weird with diapers. So I’m thinking about a change of name…

But I’m back again and very glad about it. My husband and I are famous for coming back from vacations early. You might think that we’re crazy (and maybe you’re right), but for me this is a sure sign that we like our home. There is the added bonus of being able to make music at home. (Also the bed and the food is better. And you have all your clothes with you. And all of your shoes.) This time it was a little better for me, because I started practicing guitar again. And a guitar is much more portable than a piano.

Nevertheless it felt like lugging our entire household around. Two big backpacks, the kind that people use when they go on a big trip for months, two little backpacks, something we still call the diaper bag (which contains no diapers), and my purse that weighs about four pounds. And the guitar of course, and the stroller.

Oh, we went by train. Once you’ve schlepped your luggage around and put everything away, it’s much more comfortable than car travel. You can read, listen to music, walk around, get a meal from the restaurant, everything while still travelling. (No, of course we wouldn’t take a plane! By the time you have reached the airport, plus the time you have to wait because you have to check in hours before you leave, you’re halfway through Germany. And what about the ozone layer?)

I felt really smug that I had unpacked everything one hour after reentering the house. The next day my husband did all the laundry, I shopped for groceries, and in the evening everything went back to normal. Or so I thought.

Since then we’ve been spending hours on the phone with all the people we had to call back, we went to the city and looked at pianos, fetched a guitar from the repair shop, I reorganized all my e-mail, and we talked for hours about the new studio setup and whether there will be enough money to buy the piano of my dreams. Well, not exactly the piano of my dreams, I saw both a Bösendorfer grand piano on sale, and a regular Bösendorfer upright that I can’t afford ever, but I’ll settle for a nice upright piano by Schimmel. Which is only out of reach. Actually, we have the money for it, but that’s all of our savings. There would be nothing left for emergencies or anything. So we just try to save as much as we can until December and then we might buy it.

The next days will be spent by visiting with friends, my son got invitated to his very first birthday party. (Not his birthday, a kindergarten friend’s.) And as always after breaks, we will have a minor breakdown on Sunday. (Better to schedule them in advance.)

You see, I’m not in a very good blogging mood, but if you’re looking for something really inspirational and essay-heavy, go to Christine Kane instead.

The last week has been rather full, not the least because we’re about to travel. You can tell instantly that I’m not really used to leaving the house, when you recall my preparations for just going to a rehearsal. Now imagine the effort that goes into the preparation for a ten day trip. By train, which puts a limit on baggage, and to three different locations, which requires a little planning.

In the olden days ‘d have spent the last two or three weeks thinking about what to take with me, what to wear and how to organize. So, I’m quite pleased with myself, because I’ve started thinking about it just today in the morning.

Actually, I thought about clothes and found something astonishing: I don’t have to think about them. I only own one pair of fitting pants due to my attempts on normal/healthy eating, about ten Tees (and four of those are only suitable for high summer temperatures (and since we had to dig out the long johns again, this would be August)), two fitting bras, socks aplenty, and only one jacket fit for travel, my three-in-one gore-tex jacket. So, I don’t have to think, I just try to wash everything on time and put any clean garment into my backpack. Voilà!

And nobody seems to know how the weather will be next week.

But the main thing is not the clothing. The main thing is the cosmetics, the food, the diapers, the gadgets (extra bag for electrical, digital gadgets, even though we don’t own a laptop yet), the books, the magazines, the toys, the essential CDs, the guitar (of course you have to bring a guitar). Unfortunately I can’t bring my piano.

So, for our family traveling is hard. As musicians we depend on our equipment which we can’t take with us.

But then I talked to my mother and me MIL, two women who really try to take everything with them on a trip, my mother told me how she packed the wrong clothes for her last trip and lugged an enormous suitcase around and then only used half of what she brought, my mother-in-law told the same tale, my brain went ballistic with detail, and so I felled a decision. Again.

Packing is supposed to be finished in approximately half an hour. Everything else isn’t worth it.

How do I do this? Today I spent half an hour buying a second pair of jeans. In black and based on an overtly optimistic view that I’m going to loose another pound or two. Tomorrow I’ll spent about half an hour putting everything I need on the bed in the guest room. And on Saturday I’ll clean out the fridge and the garbage, wash the breakfast dishes, pack the things we couldn’t pack before, like toothbrushes, cosmetics, teddy bear and baby alarm, and that’s it.

If we’ll forget something, we’ll do without or buy another one on the road. I solemnly refuse to be ruled by packing for two days.

Now I’m going to watch a DVD and play a little guitar (one after the other). Then to bed.

I can’t promise to keep on blogging while on the road, since my parents only have dial-up. I’ll post as soon as I can.