Today my post about not having asthma any more appeared on the Fettlogik überwinden-Blog which makes me rather happy. And then I realized two things: 1. I think I will need to write about that weight loss journey a bit but not today because I am extremely busy today even for me, and 2. I never posted the obligatory before and after pictures. Well, really they are before and during pictures because I plan to lose five more kilos (11lbs.). And no, that won’t make me too thin, that will bring me down to the weight I have always felt best at, and down to a healthy, normal-weight BMI in the low range of normal.

Behold before September 2013 at about 98 kilos: 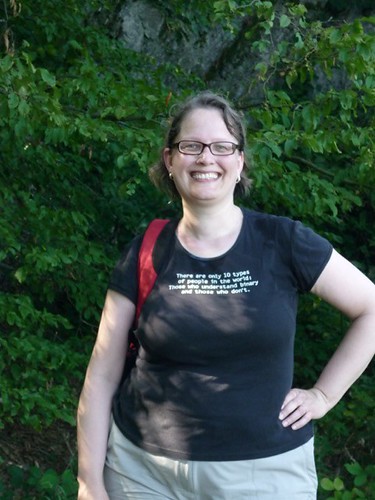 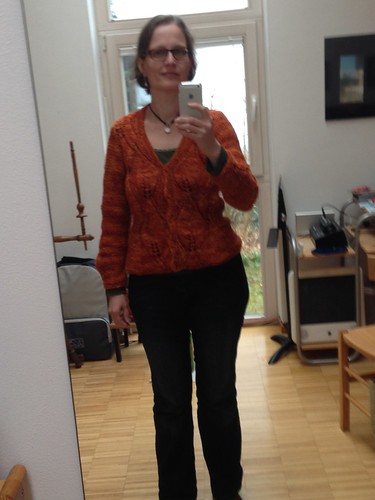 And yes, I know that fat Susanne on these pictures looks much happier than thin Susanne but you’ll just have to believe me that this is just because the first picture was taken on a really fun day hiking with my family, and the second one is a rather hurried picture taken to document a finished new sweater.

I have been trying to not talk too much about the whole weight loss thing because I was a bit afraid of comments, and I felt a bit vain, and I thought I was doing something unhealthy, and was afraid of how the whole thing would turn out because everybody knows that diets are bound to fail anyway, and all that but I think it’s time to talk about it anyways.

But I promise I won’t make anyone lose weight against their will.

This year marks ten years since I started blogging. I’m not quite sure if that’s a really long time or not. Ten years on the internet is rather long, isn’t it?

And when I think about how I started this when my son was three and now he is a full-blown teenager – yes, ten years is quite some time.

It is rather nice to have a place on the web that is mine, one where I can make the rules and do what I please. Of course that leads to a somewhat weird mixture of topics and also to a place where you can find an English-speaking blog and a German-speaking podcast.

Ten years ago there was almost no knitting and certainly no spinning, weaving or sewing in my life. Since beginning this blog I have gotten back to playing guitar, I have begun playing ukulele, and I’m still singing and playing the piano. The thing with the writing started the same year I started this blog. I know that because 2006 was the first time I did NaNoWriMo, my first very bad attempt at writing a novel.

I’m sitting here in that quiet space between me getting up and the rest of the family rolling out of bed. It is carnival break, so I’m the only one who got up at seven. I think that might be my very favorite time of day, when I have had breakfast, and am now enjoying that bit of time and space to myself.

Getting the writing done first thing in the morning (after breakfast) is very important because it is pretty hard to fit it in elsewhere. For writing – even if it is a blog post – you need to hear yourself think, and that’s not all that easy in the hustle of everyday life.

Of course there are people who write in the evenings, and sometimes I like doing that as well, but it’s much better to do it right away in the morning. Because no matter what happens the rest of the day there’s one thing I’ve already done.

So today I will go to Munich and meet a friend whom I haven’t seen in months, and I’m really looking forward to it.

But before I go I wanted to say hello, and say thank you that you are reading here, and occasionally leave a comment, and give me the feeling I’m not all alone with the things that go round in my head.

So I’m pretty curious to see where the blog will go in the future, for now I raise my tea mug to ten years and still going strong.

As I told you before the concept of mini-habits has really helped me in the past months. They always seem rather ridiculous and small but they’re easier to stick to. And then I have this neat little app where I track my progress with them, and it’s really nice to see the long chain of uninterrupted habit execution.

So the things I try to teach myself consistently at the moment (apart from the things I’ve been working to do every day for months or weeks now like exercise and going to bed on time) are:

I’ve been doing something like this for years now but I started slacking off. And at the moment I pay more attention to it, and also try to not leave the empty hamper in the hallway when I have put the clean laundry away but take the 30 seconds to actually go downstairs into the basement and put it next to the washing machine. This has the added bonus of making me move more.

“Clear to neutral” in my life usually means small steps. Putting the knitting back in the bag even if I think I’ll knit some more in the next hour or two. Putting the spinning wheel back in its bag and into my studio even though I know I will be spinning again the next day. Having everything where it belongs, and having the feeling of a tidy space totally makes up for the few minutes a day I put everything back.

You can see in our son’s room how things change when you do not clear to neutral. There are dozens of used tissues, candy wrappers, and miscellaneous papers on the floor and on his desk. There are piles and piles of books and all kind of things, and when he wants to cut his fingernails he has to borrow my nailclippers because he can’t find his. He did find the pouch for his nail things but not one single tool was in it.

“Do the dishes after every meal.” For quite some time now I’ve been trying very hard to do the dishes some time after breakfast so that my husband has a clean kitchen for cooking lunch, and I’ve making it a firm rule never to go to bed without doing the dishes first but I was pretty convinced that it didn’t make much of a difference if I did dishes after lunch, and also I thought I didn’t have the time.

Then some weeks ago I tried to squeeze sewing time out of every day in addition to what I was doing every day anyway, and in order to find 30 to 60 minutes of uninterrupted time in the evening for making a dress I decided to do the lunch dishes right before teaching instead of sitting down surfing the web at that time.

Turns out those dishes only take about ten minutes, and also doing that has the added bonus of getting me to bed on time at night.

Well, if there was a lot of washing up to do in the evening I’d often sit in the kitchen reading or playing computer games instead of tackling the dirty dishes. Because the task seemed so overwhelming. Because of the strict rule to do the dishes before going to bed I’d sometimes sit there procrastinating for an hour or two before tackling the huge pile of dirty pots.

But if I do the lunch dishes right after lunch the dinner dishes seem much less intimidating. And I am making it a habit to not start reading or playing games after dinner. Instead I get up right away, wash three dishes and a bit of cutlery, and then I’m done for the day. Much better.

This practice also has the added bonus that my husband often helps me and dries everything which means it goes even faster. Sometimes I can even get out son to wield a dishtowel.

The habit of taking all the recycling stuff to the basement once a day, and using that trip to the basement to fetch anything I want nice and cold to drink for lunch is rather self-explanatory. The hallway is the first thing visitors see when they enter our house. Having a very overflowing recycling bin spewing its contents over half the floor and all the shoes is not a nice thing to see.

And as with other things it only takes a minute or two to do it every day, and is way less dreadful than sorting recycling for ten minutes in a row on Friday.

I am always amazed at what difference it makes to change small things but by now I really shouldn’t be. I’ve seen it over and over.

I’m really excited where all this changing things around will lead me. Right now life seems full of possibilities.

So I had this asthma attack in 2008, and years later I found out that I had exercise induced asthma. And every since I’ve been using two different inhalers, one with a steroid that I take every single day, and another one that I use before exercising or doing something strenuous.

And the last time I visited my pneumologist he looked at my latest spirometry and told me to try out what would happen if I only took half the dose of the steroid.

And I did, and what happened was – nothing. I felt fine. Which was great, especially since that particular inhaler costs me 47 Euros every time I need a new one which used to be every six weeks but has become every three months now.

Two weeks ago I went back to the pulmonologist for my regularly scheduled spirometry, and this time he said, „You might want to try out how you feel when you stop the steroid. Oh, and you can also try to stop using the other inhaler as well. You’ll have to wait a few days for the effects to show.”

So I stopped using the steroid. And nothing happened. And a few days later still nothing had happened.

And then I stopped using the other inhaler. I was quite nervous when I went jogging that day, and monitoring myself for signs of an impeding asthma attack but what happened was – you guessed it – nothing.

So I am now completely off every kind of asthma medication. And that makes me really, really happy.

And I think that maybe (but I don’t know for sure, of course) this has something to do with me losing a total of 28 kilos. In the book „Fettlogik überwinden“ the author cites a study about asthma and weight loss that came to the conclusion that weight loss reduced asthma symptoms in every single case.

Who would have thought? Not me.

Now I don’t know how the whole thing will feel once allergy season hits my respiratory system but I guess I won’t feel as bad as I did before.

I am still carrying my inhaler everywhere. I’m still not quite convinced. But the possibility of living without the permanent danger of keeling over for lack of breath is exhilarating.

Every morning when I brush my teeth without having to use the inhaler first I grin like a maniac from ear to ear. And when I want to run after a train I can do it. Just like that.