Everything is good if you get enough sleep!

Alas, no yoga, meditation or morning pages, it seems I have to choose between sleep and the full morning routine.

I had deleted most of my silly iPad games and it actually made my morning better, so that’s something. Instead I read „Marriage and Murder“ and almost finished it.

I walked to the supermarket through sunshine and balmy weather and on my way back I met the family of one of my students, that was nice. I’m finding that with the whole thing of not meeting people in person for months and months I’m getting increasingly grateful for those moments when I meet someone I know in the street and we greet each other and smile.

My husband made pancakes with spinach and they were very good: 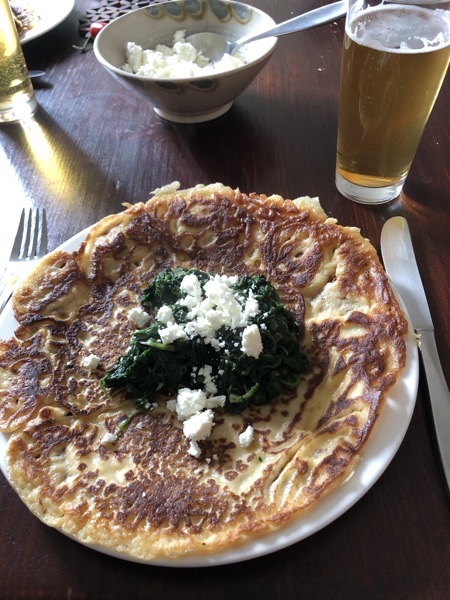 We also tried Cheddar instead of the feta and that was delicious as well. The boy showed up after school and we talked a bit. Until he said, „Wait a minute, I need to check when I have to go to PE, I think it’s earlier than 3.45.“

Yep. He was already late. Since this was his last ever PE lesson and the grade won’t count for his final grade he just sent the teacher a nice message saying that he was sorry to have missed the lesson because he had forgotten it would be earlier.

Then I taught my students and for once I used the thirty minutes in between to do lesson prep. Wrote all the emails and listened to songs that one of my singing students would like to sing next and sent her my feedback. Phew.

I also wanted to do something nice for the poor stressed boy, found out that one can get Spotify gift cards and ordered one so he can listen to Spotify ad-free for the next three months. Don’t tell him, it’s a surprise.

After teaching I started writing this post, had dinner while watching „The Devil Punisher“ (I decided I didn’t want to continue with „Ice Fantasy“ after 2 1/2 episodes, it’s a bit too epic for me right now), practiced Chinese and went to bed.

Since today is Friday there will be the cleaning of the house, the changing of the sheets, a bit of teaching and then „Torchwood“, I think. And then the weekend.