Woke up at 5.30 with a start and managed to waste more than two hours before getting up. No yoga even. But I did have Osterzopf for breakfast: 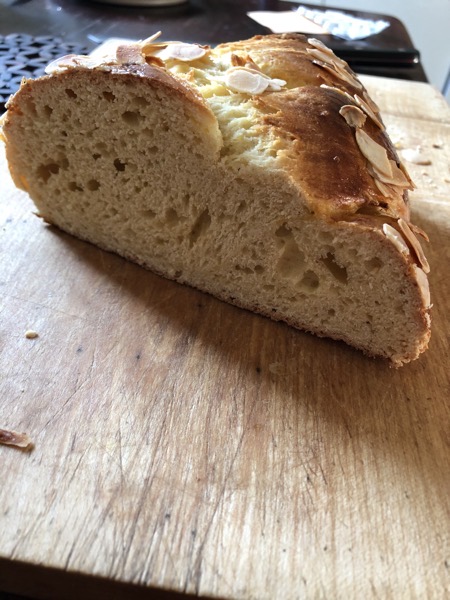 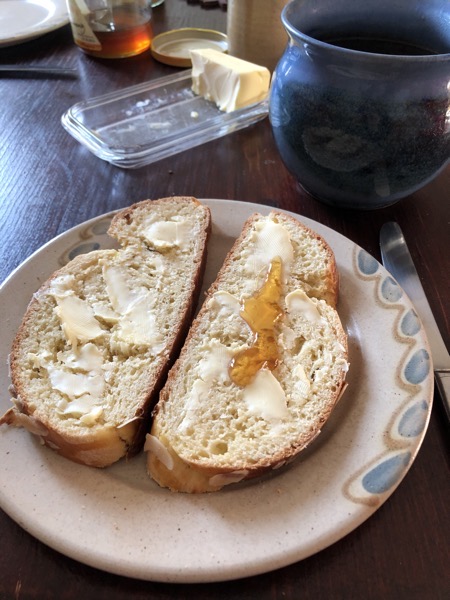 Talked with husband and crocheted. Called my mother, learned a bit Chinese, made a list for the day. Woke the boy up and then woke him up again an hour later. We’re both having trouble with getting to bed on time, apparently. He is playing video games with friends online at the moment. It was funny when I tried to explain that to my mother. „You know, it’s like they’re calling each other on the phone through their headsets and then they’re talking while they play the games.“ „But is he going out? For walks at least?“ She doesn’t get it.

My husband was the one who did the dishes. He must have felt weird with not having to cook because his mother was making lunch. I even wore a dress for the occasion: 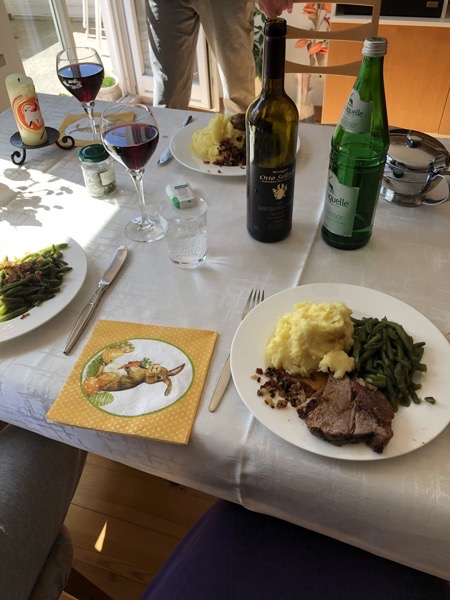 We had the exact same conversations that we always have but this time everything was nicer because my mother-in-law is fully vaccinated and so we can relax a bit more around her.

In the afternoon I thought about my goals, scrolled through Twitter, was on Ravelry, played Duolingo and just when I wanted to start writing this post my husband showed up wanting to talk to me. About singing technique. And he wanted me to listen to a Crusader song. And one by Joe Cocker. And it was all very sweet but then the boy showed up so we could eat junk food and watch ‚Torchwood‘. Another excellent episode, by the way. And I found two Chinese dramas that I’ve been wanting to watch on Youtube. We might watch those together as well. (It’s „Eternal Love of Dream“ and „Word of Honor“ in case you’re curious.)

The boy took a shower, I watched ‚Find Yourself‘ and when I went to the annex to use the bathroom I found that my husband was feeling rather down again. He didn’t want to talk, though. So I watched some more and looked at my phone for too long until it was too late for yoga and blogging and everything and then my husband showed up ready to talk.

So we talked and I think he felt a little better after that and I started writing this post at 10.30, then did yoga, wrote in my bullet journal, brushed my teeth and flossed, did 15 minutes of very relaxing yoga and finally went to bed.

Guess who didn’t get enough sleep yet again?

So. Today there will be twenty minutes of running, some laundry, something writing-adjacent and I will map out the rest of the week. I’m longingly thinking of bed already.