I had a day of brain fog and doing mostly nothing.

The day did start well with waking up around six well-rested and then yoga and meditation. Breakfast and such. But brain fog.

My husband and I started cooking almost right after breakfast because he had plans!

I called my mother in between and then we had lunch somewhat too late. Here is our antipasto: 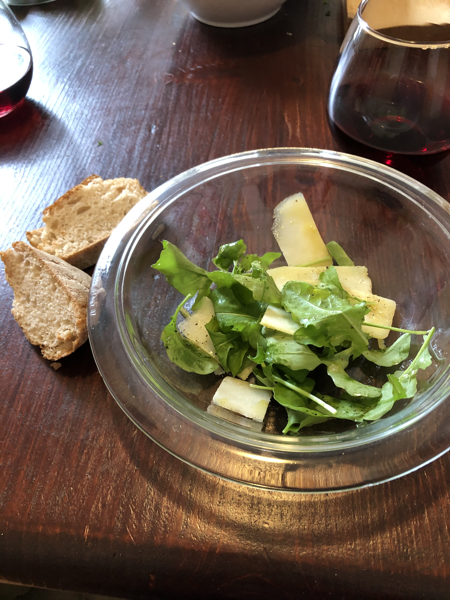 Rucola, home-grown in my husband’s studio with parmesan, olive oil and bread. 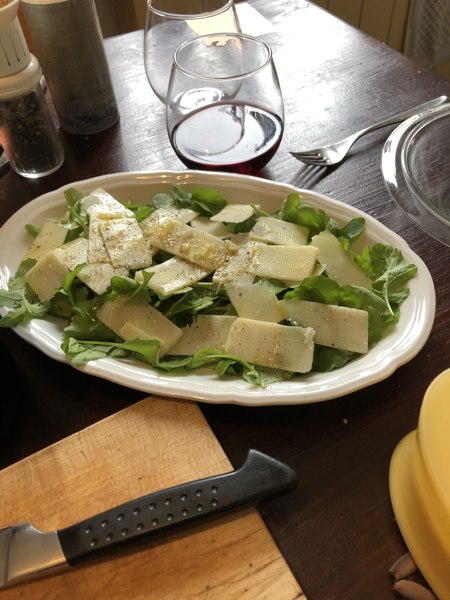 Our primo piatto was this: 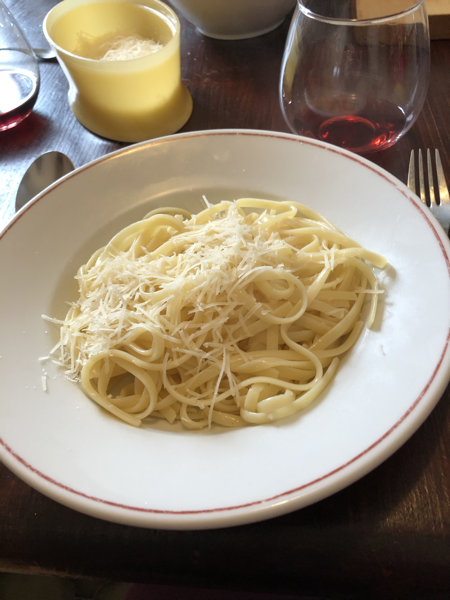 Babette with butter and parmesan. The boy got some extra pesto to go with that. And then there was the main course: 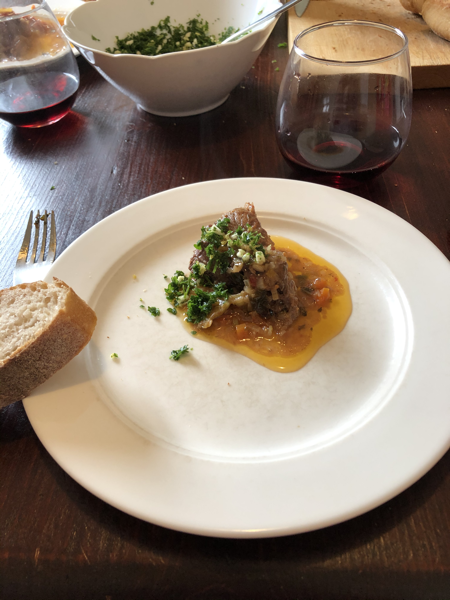 Ossobuco alla milanese. The pieces of beef were huge, but at this point we were already so full that we just cut off a small piece for each of us and put the rest away to eat later.

I did the dishes right away and then I sat around all afternoon doing nothing.

I found the drawing again that describes my current state perfectly. Someone asked me if that might be a light depression. Yep, I think it actually might be. Part of it is due to the pandemic, the rest started before that. And the remaining rest is just part of my personality.

So I have been thinking about what to do for quite some time now and since this is all in my head I’ve been thinking the thoughts in my head might also be the solution. I’ll see what I’ll come up with. Last night I decided to follow the example of Laura Vanderkam’s 5 yo and to remind myself that I am in charge of myself.

Other than that I spent a huge portion of the afternoon trying to help the boy with getting his religion homework done (due last Friday). He is so wrought up by the texts he is supposed to read and the silliness of the questions that he actually spent two days ranting against said homework, completely unable to write anything.

Now, I get why he is feeling indignant, I would too but he doesn’t have to do a good job, the whole thing doesn’t need to make sense and yes, one could write a doctoral dissertation about every single one of these questions and yes, I understand why he is upset. But. Just write down something so you don’t get a failing grade, please, thanks. I mean, if I had been in his place I would probably just have asked a friend for his homework, re-phrased everything and called it good.

The problem with this was, of course, that he should have worked on the presentation that is due today. So, that will be interesting. He will be distance-learning today, so I guess we know what he will be doing while listening to his teachers today. The presentation is due in the afternoon.

In between visits from an angry boy my husband showed up to share with me the wonder that is Walter Benjamin’s „Passagen-Werk“. That is a rather peculiar book, I must say. I got read some passages and my husband waxed poetically about the language and the fact that Benjamin is grounding his philosophy in material culture and such.

It was very sweet but it also showed me that out taste in reading material is rather different. No, I definitely won’t read Benjamin. I’ll stick with Lindsay Buroker’s ‚Star Kingdom‘-series, though, once I’m through with book three I want to switch to something else for a bit.

I did feel a bit like a spoilsport because my husband started showing me a paragraph or two about fashion that went on to poetic philosophy, I decided to read it myself because I dislike being read to (way too slow), found that Benjamin wrote some sick things about crinolines and bonnets and then he segued into how being horizontal is better for women especially when they’re pregnant and went on to speculate that men became bipedal earlier than women. What? Really?

My husband hadn’t read that part yet, by the way.

The boy was too busy to watch something with me so I watched the last two episodes of ‚Put your head on my shoulder‘. That was, um, interesting as well. The whole show is okay and a little silly but the part where they are in Heidelberg in Germany is especially weird. Heidelberg looked nice (I think they used stock footage which is alright) but the fact that every single person in ‚Heidelberg‘ spoke English and that they then went to a church to get married by an English speaking priest who did a rather American ceremony? Strange, very strange.

I might be a bit over silly romance series.

Today there will be the usual Monday things. Running, teaching all the students and I still need to plan the week out, it got too late last night.