Seems that staying up to do the dishes on Thursday night really paid off.

Didn’t look like it at first, though, because I overslept. I had my alarm set for six and when I looked at the clock for the first time that day it was seven. Oops. Got out of bed fast and made breakfast right away so the boy could have some before sitting down in front of his computer for school. So no morning routine.

My husband got up early-ish, we talked while he had his breakfast and I told him that the boy had a test at the time when we usually eat lunch so it would be good to have lunch earlier.

He set off for his run while I did the dishes, changed the sheets on my bed, cleaned the house and did a load of laundry. When he came back he made lunch all on his own which meant I could do a week’s worth of lesson prep before an early lunch.

My husband is getting rather good at cooking alone, this one was somewhat complicated: 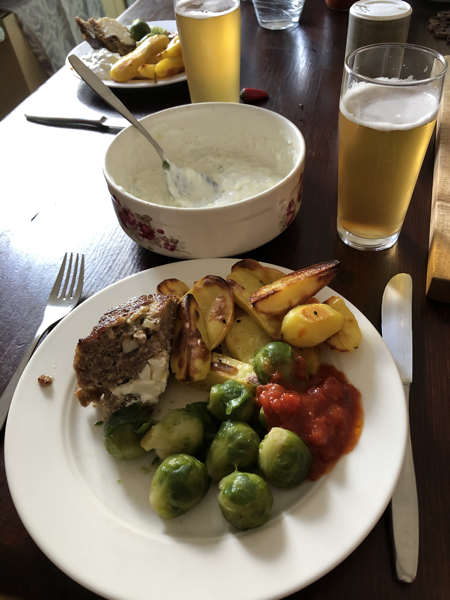 Bifteki, oven potatoes, Brussels sprouts, tomato sauce and tsatsiki. The boy had vegetarian brats to go with it. And he left on time to take his test at school.

It was early enough that I could do the dishes before teaching my first student of the day. In the break between students I did email, admin and hung up the laundry. I had planned to write new words but couldn’t make myself. I did start this post instead. So, technically that writing new words as well.

After teaching I made guacamole which we ate with tortilla chips in front of TV. Then more dishes and early to bed.

Today there will be running and, I don’t know, something. Crochet for sure, and reading and watching some Netflix.