Got enough sleep, did the full morning routine and even worked on the novel for ten minutes.

And then it turned out to be a normal Thursday.

I went to the supermarket and my husband called me on the phone because he had forgotten to put some things on the list. Not a problem this time because he reached me before I went into the store. There is no reception in the store and it’s always a bit frustrating to come home from grocery shopping to a new list of things that absolutely should have been bought.

On Thursdays my husband usually doesn’t have anything special planned and doesn’t start teaching early so he likes to cook fancy stuff. Here’s the fancy and really tasty biryani we had for lunch: 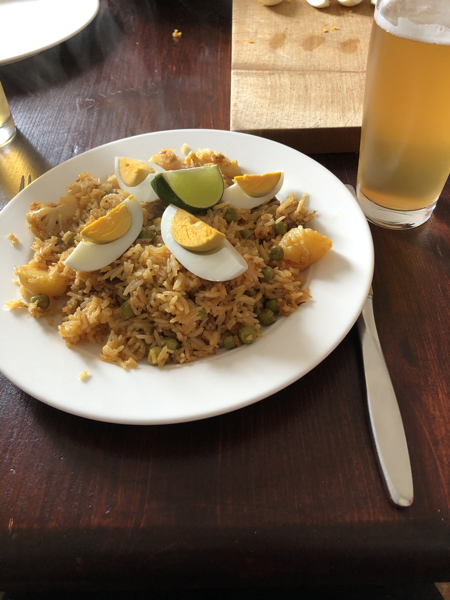 It doesn’t look like it but it took more than two hours to make. It was delicious. It also meant that when I came back home with a heavy backpack and two huge bags full of groceries my husband was stressed out because of cooking and I barely had time to stick the frozen stuff in the freezer before starting chopping duty.

So I helped with the cooking, got chided for being underfoot putting away groceries at the worst possible moment, helped some more and found that I didn’t buy enough peas for the week. And that I need to print new grocery lists.

Lunch was a little late but at least early enough that the boy could eat before going back to school for his first PE lesson this year. Poor thing had to play soccer.

While my husband doesn’t start teaching early on Thursdays I do. So after lunch I didn’t have enough time left to do the dishes. This will be important later.

I taught a few students, used a break between students to pay bills, look at the budget and download bank statements, taught some more, got sucked into a Twitter hole and when I came to the kitchen for dinner the oven was on and the leftover biryani was in it for reheating.

I ate some bread and cheese and read more Twitter. Until my husband showed up, asking me why I hadn’t turned the oven off. I had no idea I was supposed to. And I also had no idea when he had turned it on or for how long. Nothing smelled burnt, or something. I was the first to finish dinner so I went on to watch some Netflix. It would have been better if I had started my blog post and then done the dishes but I couldn’t because dinnertime wasn’t over for the rest of the family.

So I watched some Netflix. And then some more. All the while knowing that I would have to tackle all the dishes and the blog post. Since I dreaded that task I just watched some more Netflix and then looked at Twitter. This is what the kitchen looked like when it was my bedtime: 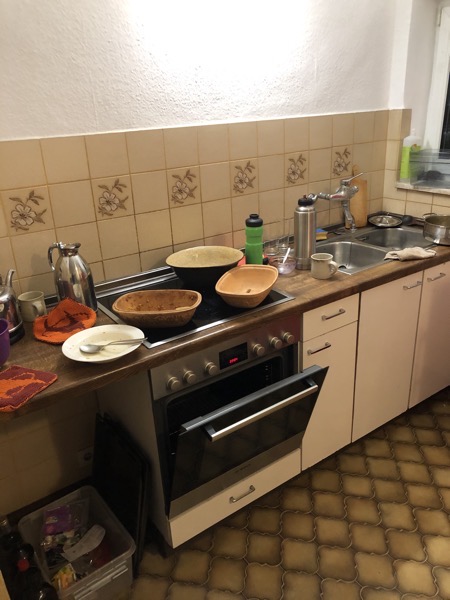 I almost went to bed without lifting a finger but waking up to a mess is always so demoralizing. So I – started writing this post first, of course. Because I know myself I then flossed (good thing, otherwise I would have skipped that again). And then did all those dishes. Which meant I went to bed way too late and then overslept which doesn’t bode well for today.

Note to self: tell the boy that he needs to eat dinner earlier. If not he gets to wash the dishes all by himself from now on.

But the most interesting thing about this was for me that the fact that I never go to bed on time on Thursdays is not a personal failing. It is a direct result of my husband thinking he has more time to cook on Thursdays while I start teaching relatively early. And then I usually do the dishes on Friday morning and that means I don’t clean the house while my husband goes running and that means I have to clean in the afternoon between students. Which means the lesson prep I usually schedule for Friday afternoon doesn’t happen.

I think I need to talk with the rest of the family.

Today there will be – the cleaning of the house, not much teaching and then the weekend. I’m done with this week already.