This here blog turned fifteen yesterday. I’m not quite sure what to do about it. And I wouldn’t even know if I hadn’t put the date in my calendar. It doesn’t seem that long. At least not until I look at the boy, all grown up, lecturing me about Plato, the Byzantine Empire and the Bible. (He had to study for a religion test and had been watching something on Youtube.) The first iteration of the blog was called „Diapers and Music“ and had posts about my trying to make music while parenting a toddler.

Anyways, thanks for reading. I really appreciate it.

While the blog had an anniversary I had an ordinary day, complete with a wasted hour or two before breakfast, grocery shopping, my husband shoveling a ton of snow while I was building the fire for a change, lots of teaching and email and some Netflix. I’m really enjoying ‚The King’s Avatar‘ right now. 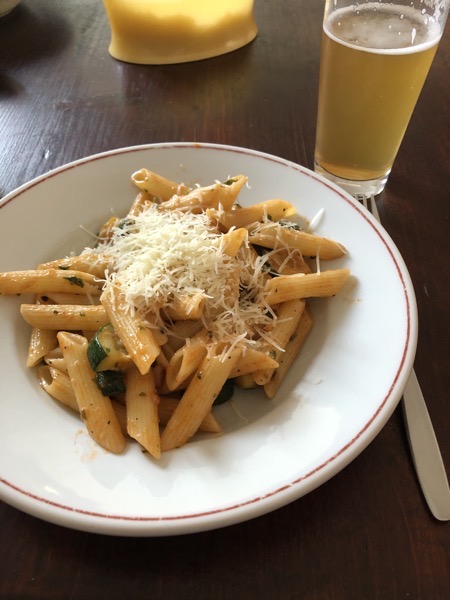 That’s penne with zucchini. I went to bed almost on time. The keyboard for my new iPad arrived and I like it even though it is black. Red or purple would have been much better.

I’m thinking about story and culture and language and learning all the time. I keep picking up my phone to look things up every ten minutes or so. I spent a lot of time in the morning deleting book samples from my eReader. There were 799 of those on it yesterday morning and as of now there are only 81. And only six of those are in the ‚buy later‘ category. That is very good.

I’m also contemplating cutting my hair again. And I found out what’s wrong with my glasses. They have been irritating me on a low level (just like the itch on my neck) for quite some time now. I thought they were dirty or smudged. And then, yesterday in the afternoon I suddenly realized that I need stronger reading glasses. Duh.

I’m not getting new glasses right now for sure. I’ll wait a few more weeks at least. But at least I know.

Oh, and I got a phone call from my father who wanted to ask my opinion about him getting a Macbook because online banking doesn’t work anymore on his Windows 7 machine and he doesn’t want to buy Microsoft Office. Right. Um.

Today there will be cleaning. Only two students, lesson prep for next week (I hope), more crochet and watching ‚Torchwood‘ with the boy. And eat potato chips. And not drink a real beer.

My life is wild right now. And I’ll tell you all about it in great detail tomorrow…