I woke up early and did almost my whole morning routine including writing for half an hour. Well, 25 minutes. And then the day stopped going as planned and I started shifting things around.

I did some admin and had about half a dozen talks with my husband where he came over and asked me for my opinion or to look at something. We made pizza: 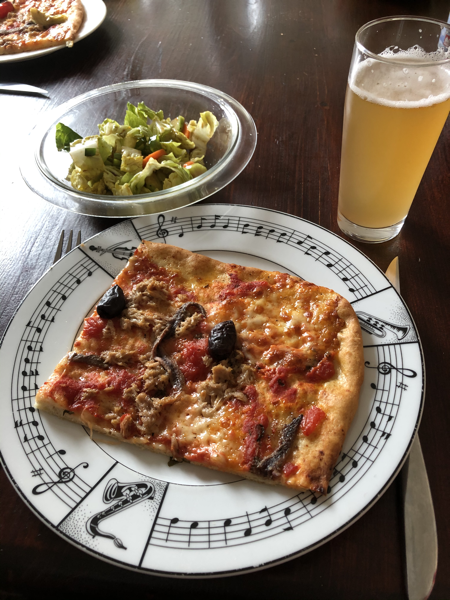 There was a new installment of the blanket CAL just in time for me to start working on it. I taught only two students and did most of the weekly cleaning in between. Unfortunately, there are many parts of the house that are not included in the week cleaning. I should get around to cleaning those once in a while as well. And while vacuuming the kitchen floor is a good thing maybe I should mop it sometime in the future as well.

But hey, the house is cleaner than before.

There were also things like talking with the boy about bedsheets and if he needs a new set or not. (The answer is no, he likes the ones set he uses very much and we happen to have two of those so I just need to find the matching pillowcase which is probably around one of the guest pillows and once I’ve swapped that with one of those that nobody likes he’ll be good.

I practiced Chinese and lamented the fact that I can’t really write it. Not at all. So I guess that’s something I’ll tackle soon.

The boy and I watched a rather gruesome episode of ‚Torchwood‘ and he told me that he does not want to continue watching ‚Lower Decks‘. He doesn’t like it and is not as completionism as I am. So I guess I’ll be watching that on my own from now on. I watched some more Netflix on my own, started writing this post, got ready for bed and turned the lights out almost on time.

Today there will be a short run, writing, Chinese and stuff. Which will include more crochet. Life is good.