The alarm went off at 5.30 and I – promptly fell asleep again. Got up at 6.15 and somehow moved so slow that all I did before breakfast was ten minutes of yoga.

The boy overslept as well but this time I was more vigilant and woke him up fifteen minutes after he had failed to send me the his ‚good morning‘-message.

My husband is pretty depressed again, hasn’t been eating much since Sunday and needed a lot of hand-holding and conversation. He is starting to look a little better, though, but there went a sizable chunk of my morning. I looked up resources for learning Chinese and ordered a phrasebook.

I walked to the health food store and picked up two spiral notepads for the boy on the way. Came back home and helped a bit with making lunch. The boy asked if I had already started the list of movies we want to watch together over Christmas break. He suggested a Google doc. I sent him a picture of the page in my notebook instead.

Because we were so late all morning lunch was late too: 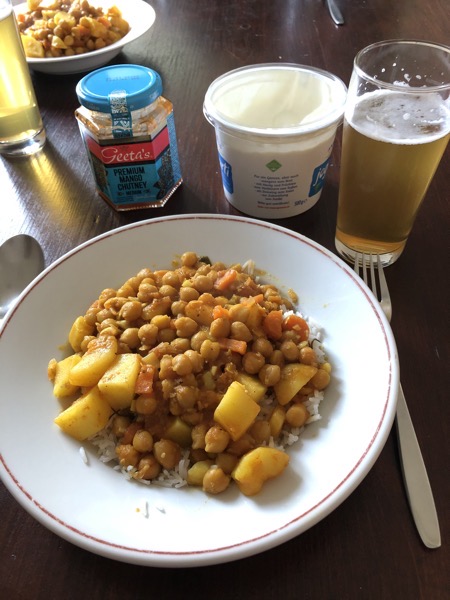 Teaching was semi-chaotic as well and I didn’t manage to prepare today’s lessons and forgot to send another student some sheet music yet again. I did hang up laundry in between students and wrote for twenty minutes, so that was at least something.

Ate dinner rather late, helped the boy with some homework, talked with the rest of the family, procrastinated doing the dishes and only started doing the massive pile of dishes when it was already time to get ready for bed.

And none of this bodes well for today.

Today there will be running and all the teaching without a break from 2.30 until 7. Probably. It is that weird holiday where schools are closed but everything else isn’t so there might be a few students not coming. No idea. Four of them already asked, one probably has no idea that it is a holiday, we’ll see.

Is it the weekend yet?