I had set my alarm for 5.30 but was too tired to get out of bed before 6. Did yoga, forgot the meditation. Oops. Since I was so tired and sluggish everything took longer than usual and there was not enough time to write before breakfast.

I did decide to attempt writing again after my breakfast at 7.45. My husband had been a little late all week and I figured I’d have 15 to 20 minutes.

He showed up at 7.53. At this point I had read through what I wrote the last time and had added – 31 words.

We talked, I crocheted, he had breakfast. I updated the OS on my phone and my tablet. The tablet promptly showed an error every time I tried looking at my email and the app that I use to track my weight crashed on opening. Interestingly, the phone app still works. Unfortunately, I hadn’t updated that one since August 8, so I spent half an hour going through my notebook and putting the data into my phone. Then I made a backup.

I’m pretty happy that I changed the sheets and did the weekly cleaning for the first time in ages. I also might have finally gotten rid of the horrible smell around the toilet and found out that the reason the bathroom sink was clogged is the new soap we were using. I threw the soap out, declogged the sink and went on to help with making pizza. Lunch was actually on time which is unheard of on pizza day but my husband didn’t build a fire yesterday and worked in the yard instead of going for a run. Pizza was excellent: 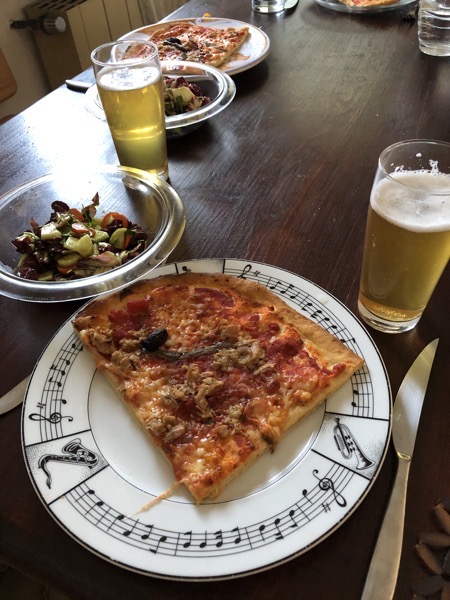 Then I taught a student online. I had great plans of writing in the break after but instead I installed a systems upgrade to my laptop. I don’t know why I can’t leave those updates alone, it’s almost a compulsion. Then another student, in person this time, and then another break. That time I was all set up for writing but then – the boy descended upon me and I didn’t extricate myself from the conversation in time. When I came back to my studio the systems update was still not complete. I force-quite the computer, re-started it and things were working again. Only a little different. I always have a hard time adjusting after those software upgrades.

I taught two more students and then met with the boy to eat the rest of the pizza and watch the new episode of ‚Discovery‘. I’m not quite sure what to think of it. There are many things to like and quite a few to dislike as well. We’ll see how that goes.

Then the boy and I did a huge pile of dishes and baking sheets, I tried to get some words written but was too tired (again), I started writing this post and that was it for the day. I went to bed a little too late.

My nice and shiny spreadsheet tells me that I need to write 2,600 words per day until the end of the month in order to win NaNo. That sounds highly unlikely. The next week won’t look much different from the last one. On the other hand I don’t want to have a life that has no space for writing. Seems I need to change things up.

Today there will be the running, lots of stuff like filling out forms, taking care of the misbehaving printer and some writing. And laundry. I am expecting a severe Saturday slump as well. On my list I also have ‚cut out fabric for t-shirt and leggings‘ but that’s mostly aspirational. As is ‚repair the boy’s roller blinds. I bought a new thingamabob that I need to install.

It looks as if things won’t be boring. Which is good.