Slept in until six, meditated by accident and did yoga.

The boy overslept and I only realized when it was 7.30 and he wasn’t down for breakfast yet so I went upstairs and found him still sleeping. I think he still got to school on time…

The kitchen faucet had been unruly lately and my husband changed the part at the end of the faucet, the sieve thingy (sorry, can’t even think of the German name for it right now). That was a great idea but then the faucet started sputtering and only giving us a trickle of water. Oops. We unscrewed and re-attached several times and yesterday morning I was so fed up that I decided to make an excursion to the hardware store.

I bought a new part (and two more, one that probably won’t help us in this house), went grocery shopping and helped a little with lunch. Which was most excellent: 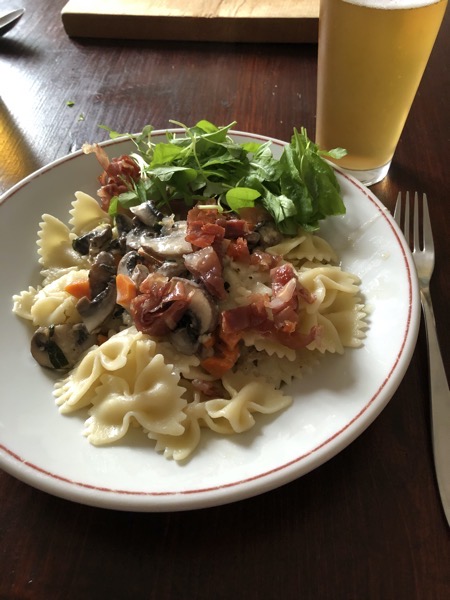 Farfalle in mushroom cream sauce with fried bacon and arugula. Then I had all of ten minutes before my first student of the day. In the morning I had re-arranged my studio. About two weeks ago or so I finally realized that the new setup with the extra keyboard and such will probably stay up for a couple more months at least. The extra keyboard meant that I couldn’t get to the sheet music I used for teaching. So a couple of months back I had extricated the things I use most and put those on my writing desk. Which meant the desk was always cluttered (okay, more cluttered than usual) and it was driving me crazy month after month.

Until yesterday morning when I waltzed in, pulled out all the sheet music I will probably need until next summer, put the spinning and knitting magazines that I’ve already read behind the keyboard and the sheet music up on the shelf behind the door. Voilà, less than ten minutes of work resulted in a studio that lets me put everything away and get at it at the same time. Woot!

Then there was all teaching all afternoon and a nice liverwurst sandwich in the evening. The boy helped with the huge pile of dishes and then I started procrastinating the writing. I started writing this post, found that it was too late to work on the novel and went to bed.

Today there will be the changing of the sheets, the cleaning of the house, only a sane amount of students, some writing and in the evening I’m planning to watch the newest episode of ‚Star Trek Discovery‘.