I did wake up early enough to do yoga and meditate for five minutes, so that was an improvement. I spent most of the morning doing all the grocery shopping. I usually spread it out over two days but decided to cram it into just that one morning for a change. I’m hoping that that will give me some more time on Thursday.

The boy is still staying mostly in his room because of quarantine. Later today I will call to ask for the result of his test. Since they had him do his own swab (I am livid about this!) I don’t think it would come out positive even if he actually had COVID-19. He’ll get another test on Friday or so. It’s mandatory anyway.

Since I don’t want him to go back to that doctor I will find some other place to get him tested later today. The only alternative would be going to the test center by bike. All 14 kilometers. And back.

But back to yesterday morning.

With the boy not going to school right now our normal schedule is a bit upended. I had no idea when he needed to get up. I did know that he has to sit in front of his computer during normal school hours. So I got breakfast ready for 7.30-ish and waited. When he hadn’t come down by 8.10 I went upstairs. Turned out that he was a) still sleeping and b) already five minutes late for online school. Oops.

So he started his computer while still in pajamas and I fetched his breakfast. Rough start to the day.

The health food store was a lot busier than usual, probably because I went earlier, but the supermarket was almost empty. I guess Tuesdays are good days to shop there. I tried getting all the food but since it was rather easy to carry everything I probably didn’t get enough.

For the first time ever I talked to someone who didn’t wear her mask properly. Her nose was hanging out. I have been angry at every single person who doesn’t cover their mouth and nose properly for months now. I never said anything because I was afraid of conflict. But then I saw a post on Twitter re-tweeting several posts from a woman who obviously thought not wearing a mask was a good idea and something to be proud of and she had said that nobody ever said anything about her lack of masks apart from a few millennials. And that she would never have talked to someone older and wiser when she had been that age.

So I decided the next time I see someone without mask or who doesn’t wear the mask properly I will say something. And to avoid conflict I’ll stay polite and say things like, „Excuse me but you seem to have forgotten your mask,“ or like today, „Excuse me, you mask has slipped down.“ I was totally prepared to her jumping in my face but instead she said, „Oh, sorry, I didn’t realize. Thanks for pointing it out to me, this mask seems to be too big for me I really need to do something about it.”

And I have to say that it never occurred to me that people might actually forget to check their masks. I mean, the whole mall is plastered with signs but – okay?

I came back home just in time for lunch. My husband built it around the leftover, homemade aioli: 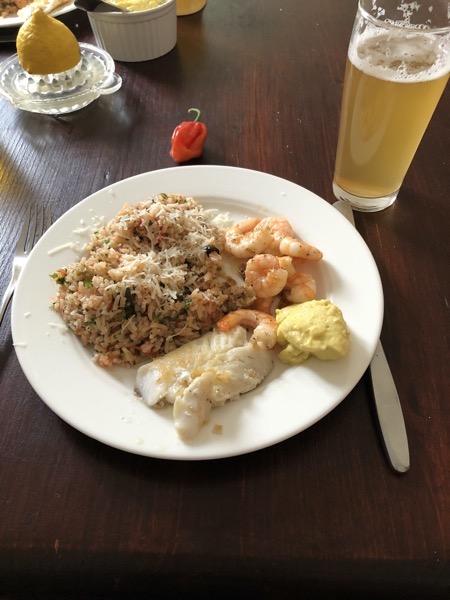 That’s the rest of the fish we had a few days ago, some shrimp because there wasn’t enough fish, tomato rice, parmesan and aioli. The boy had scrambled eggs. I didn’t eat the chili but my husband thought it looked nice and he ate about half of it.

After lunch I slumped around until I took a quick shower. All my lessons were online again and in between I did the dishes. Only four students.

Then dinner and a beer and some reading. I have finished three quarters of the main body of the crochet blanket. Sorry, I didn’t take a picture. I also bought the next book in the Westcott series. I’m finding those very enjoyable and wonderful escapism. Thinking of the books as fantasy is making them much more enjoyable because otherwise I would be squabbling over every minor historical inconsistency.

I have no idea when I will have the headspace for writing again, or for answering email and such. Right now my thoughts are a tired jumble.

So. Today there will be running (I seriously hope), all the teaching (I still haven’t heard back from two students about the video lessons) and then early to bed, I hope. Also some reading and some crochet. Oh, and phone calls.