Because that was the highlight of my week, going to the new grocery store for the first time ever.

I woke up pretty early after not quite enough sleep. (Yes, I’m having a streak. No, I don’t think it’s a good one either.)

After deciding that I needed to read something really excellent I had followed Kristine Kathryn Rusch’s recommendation to read Mary Balogh and was not disappointed. I started with the first in series. I made an exception from my rule of not buying new books unless I have pre-ordered for a book that’s only 1.50.

The book does not disappoint. I basically spent every free minute that day reading. And that despite me not being in a romance reading mood at all.

I find that since I read mostly for plot and character I end up devouring series of cozy mysteries and such that are fast to read, mildly entertaining and sometimes not all that well written. I enjoy them anyway but from time to time I need to step back and focus on the quality of the writing much more. Because an excellent book has both the interesting plot and characters and beautiful writing. Without screaming, „This is supposed to be Literature!“ Or boring me with pages of description. (That’s something I dislike about Tad Williams. As much as I love most of his books the pages and pages of description are not to my liking at all. Realizing that I can just skip those was rather freeing.) I also have a hard time giving up on a novel. I do often set something aside and then never get around to picking it up again but consciously deciding to no finish a novel that I started? Very tricky.

So I’ll be focusing on quality a little more.

Mind you, I do sometimes need to read mediocre writing to assure myself that one can be a successful writer without being a genius. People might still enjoy out stories. And something I just want to read something undemanding. Not that beautiful writing demands something as such. As many things this one is complicated.

But I wanted to tell you about the grocery store. Of course. Much more interesting than books. Or not.

So, our favorite grocery store was torn down some time ago, might have been two year, and now they have built a hotel there but with a grocer store on the ground floor. I was really looking forward to it. It was looking nice, and new and big. I had already seen that the new one belonged not quite to the same chain as the old one but that one is also pretty good. And it was clear that the bakery in there would not be up to my standards but then I can just go to a different bakery or two during the Tuesday health food store run.

So I walked up there, all excited, donned my mask and entered. It did look good but then I realized that what they have is huge shelves full of all the same things. The produce section was a little disappointing. And then I got that feeling of dread and disorientation that you get in a new grocery store where the music is too loud and the places where things are found make no sense at all.

And while the aisles are broad I find the store hard to navigate. Not like the big one where I have been shopping for the past two years or so where risoni are shelved with noodles used in soup and apart from all the pasta or where they have a canned fish isle that is far away from all the other canned goods, no, the store was laid out completely different from any other store I have every been to.

There were a lot of snack things and microwave meals and such which makes sense since both the nearby school and a lot of offices and such mean that they’ll serve a big lunch crowd. I also find that all the newer stores have bigger sections of food that need little prep. Of course. These days that we cook everything from scratch a lot of people just don’t. Which is legit, especially when you don’t have food intolerances.

The weirdest part was that it felt as if they had taken the inventory of a much smaller store and had just put it in this big one. And I looked for Q-tips for about ten minutes but didn’t find any.

So. I guess next week I’ll walk all the way to the big grocery store again. At least there I get almost everything I want.

The it was time for lunch cooked from scratch by my lovely husband. He even used a recipe. From the internet: 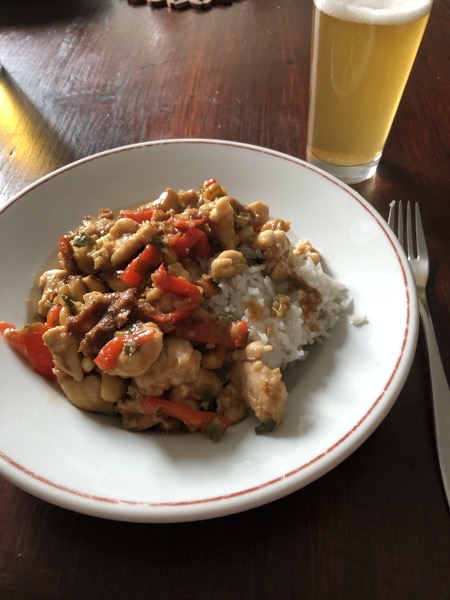 Chicken with cashews, peppers and rice. The boy got his with chopped up soy bratwurst. Not the best substitute but all we had and he said it tasted good nonetheless.

Today there will be the cleaning of the house (Hurray!), maybe some laundry, a bit of teaching and in between, in that huge break where I never manage to get anything done, I’m planning to plan for next week’s lessons. Having a lot of students means I need to do more prep work as well. I don’t usually do a lot because most of my students are still at that stage where I just use one book of music and we go from one piece to the next but I have some students where finding the next piece takes a little more thought and I really dislike doing that on the fly. So I’ll try using my Friday afternoon break.

And one of these days I will do things like sew and spin and write again. Not today, though. But there will be some TV watching at night, at least.