First, I overslept. My alarm went off at 5.30, I woke up and the next time I looked at the clock it was 6.10. and then 7. Oops. So no yoga again. Had breakfast, then turned the heel on my sock while my husband was having breakfast and then I got going. Did almost all the weekly cleaning, did not manage to fold the laundry, had a lengthy debate with my husband about something I don’t remember. I did watch the second video for preparing the class that starts in ten days.

Took a shower and ate lunch with my husband. The boy ate with his grandmother: 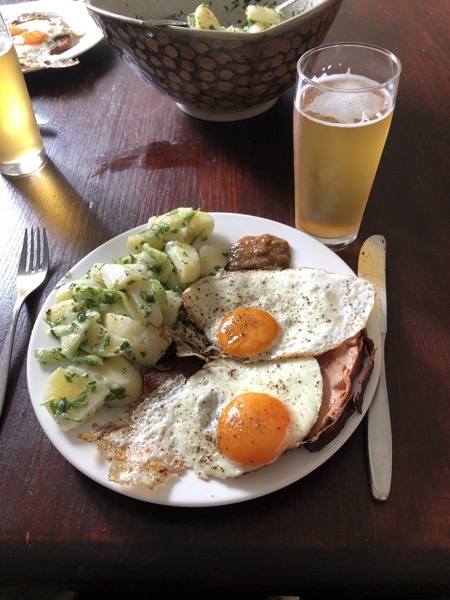 There was still Leberkäs in the fridge and leftover potatoes, lots of eggs and the cucumbers are all ripening at once.

I took a break, did some miscellaneous stuff, donned a t-shirt without holes, my husband showed up, and we talked for two hours. By then I was already a bit late for recording the podcast but I was very determined. My father had sent an email that my mother is in the hospital with a broken vertebra again. From what I hear the MRI was inconclusive because they imaged the wrong part of her spine. She is there, on rather strong painkillers until they can do another one. Just so you know, this is what happens when you smoke like a chimney for decades. You can get severe osteoporosis which means every time you move wrong or fall in any way you break a bone. Or as with those infamous broken hip incidents it might happen that you hip just breaks and you fall because of that but that’s not what happened to my mother.

Now, my mother being incapacitated also means that my father is sitting at home alone, unable to get groceries. But he assured my sister that he has enough canned food to last him through Tuesday and then he’ll ask their cleaner to go grocery shopping. I might run extra hard later today to do everything I can to be as healthy as I possible can when I’m old. (Yes, I know it’s not really in my hand but still.)

I did all of the set-up, did my vocal warm-up, gathered my projects, put my contact lenses in, turned the camera on, saw that the battery was down to 50% (the last time I checked it had been full but that had been a week earlier) and decided to record anyway.

I recorded a rather stilted and awkward podcast up to minute 21 when the battery light started flashing. And that was it. Turned out recharging the battery takes about two hours. Unfortunately, by then I was rather hungry and it was almost time for dinner. So no podcast. I did order an extra battery later.

It feels as if I can’t get anything done at all. No podcast, no novel-writing, no exercise all day, it was awful. The whole week is a bust for bodyweight training so far, and yoga has been sporadic.

Dinner was good, though, and the episode of ‘Eternal Love‘ that we watched was pretty engaging. Even if some of the subtitles were missing and the ones there were had some interesting word choices and grammar.

So today I will attempt to make up for yesterday. I would love to run for an hour, take a shower, eat an early lunch, record the podcast, then get it ready for publishing in record speed and then finish sewing the dress I want to wear tomorrow. Since I doubt I can sew 15 buttonholes, attach 15 buttons and hem the whole dress in an hour or so that probably won’t happen.