I slept until 6.15, did not do yoga because I thought I had all day and could do it later (no, that didn’t work) and had a leisurely breakfast. The boy was really late again so I had quite some time sitting and reading until he showed. In fact, I actually watched all the videos for this week’s publishing class. I also watered everything in the garden. Well, I hope it was everything.

Then I walked to the health food store and back, spent some more time on the computer and made frozen pizza for lunch: 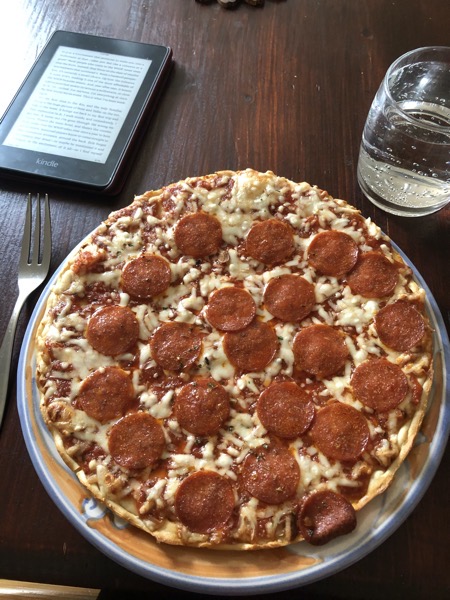 Before I had left for the store I met my mother-in-law in the hallway. She was surprised that I wasn’t coming back but going out. „You’re young,“ she said, „that’s why the heat doesn’t bother you.”

Um. A) I never said the heat didn’t bother me, b) while I am thirty years younger than her I am in no way young anymore and c) when I was in my twenties heat like that would have made me flop over near fainting. This is reason 1,374 why being fit is awesome.

That doesn’t mean I did any exercise all day. No yoga and no bodyweight training either. I thought it would be alright because I would record the podcast but – I didn’t. I prepared the podcast. And I finally wrote the June newsletter. Ahem. I hope that that will make me less blocked. The missing newsletters have been weighing on me.

At some point dishes got washed and a load of laundry got put in. I was running out of masks and will need a fresh one later today.

So I felt like I hadn’t done anything worthwhile but when I look at what I did it’s okay. Nothing to be sneezed at. Nothing extraordinary as well.

The boy and I watched an episode of ‚Eternal Love‘, a rather good one. I also finally confirmed that Mo Yuan, the god of war, and Ye Hua, Crown Prince of the Nine Heavens are actually played by the same actor. The boy didn’t see the resemblance (beards can be deceiving). I can’t blame him because I wasn’t sure myself and when I looked up the actor Mark Chao it became clear that he looks completely different from role to role.

Afterwards we hung up the laundry and talked a bit more, then I started writing this post and that was mostly it for the day.

Today there will be running/walking and I’m hoping to get away as early as possible because it’s still rather hot. I also need to go to the farmer’s market for potatoes and go in the completely other direction for a case of beer. The plants will need to be watered, the podcast needs to be recorded and I really want to move the novel forward. Since I’m not working on it it feels like the slowest, most boring story in the world right now.

And tonight, after dinner, my husband will be back home.