I woke up from the alarm at 5.30 but I shouldn’t have bothered. I didn’t really get anything done all day. No yoga, no meditation, a lot of reading stuff on the internet. I did eat breakfast on time but then dawdled until my husband got up.

It seems we are all having a bit of a problem to get into a summer break groove. There was a lot of talking with my husband and the boy throughout the day. Most of it rather pleasant. I finished turning the heel on the current sock.

I did call my mother on the phone and talked to her for 45 minutes. I helped a bit with lunch. We even had two courses: 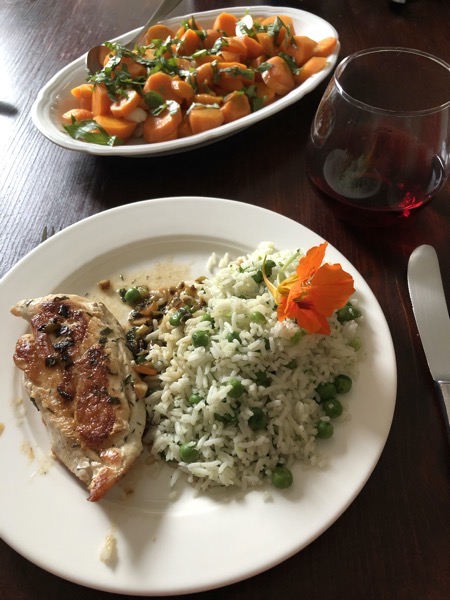 Chicken, rice with peas (and nasturtium blossom) and marinated carrots. The carrots are from out garden. 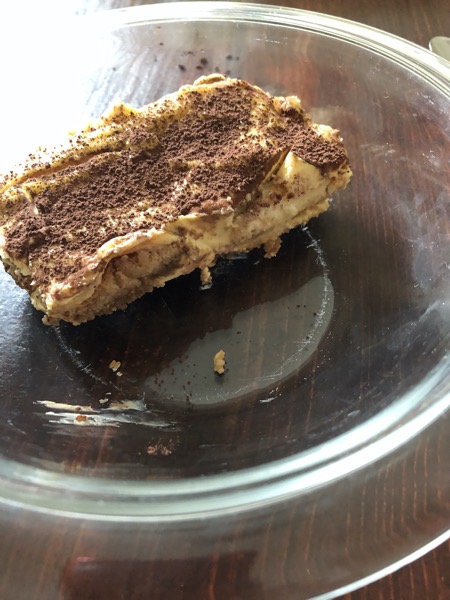 Homemade tiramisu that my husband made the day before. He made the carrots two days prior, so all of this was a big deal. This was maybe the best tiramisu I’ve ever had, usually it is really soggy and limp but this one wasn’t.

I had big plans for the afternoon. I wanted to do yoga and bodyweight training, make a sample buttonhole for the dress I’m sewing, write my sad and way too late newsletter and work on the current novel.

I did do some bodyweight training. First time in ages, so yeah!

And that was it.

Every time I was about to start something someone would enter the room and want something from me. I was so cranky at some point that my husband vowed to not disturb me again before dinner time. But then the boy came downstairs. He was determined to unclog the washbasin in his bathroom and needed my help to find the supplies even though he had just done the exact same thing a few weeks ago. Pro-tip: When you have long hair it is a good idea to put a sieve in your washbasin to prevent all that hair to clog the drain. If you do that you won’t have to take the pipes apart and clean disgusting stuff out of them. You’re welcome. I did have to sacrifice another bottle brush. Boo! But we’re all hoping that he will now actually use that sieve.

When my husband showed up again shortly before dinner for frying some eggs and such he was very proud of himself. He had actually made decisions about his upcoming visit with a friend all on his own without asking me for input beforehand. Woot! I’m trying to shed a bit of the mental load here and he is actively helping.

So I got nothing done. This time it was not my husband’s fault.

Afterwards the boy and I watched an episode of Enterprise. The episode was actually pretty good but then we got talking about linguistics, as one does, and decided that the series is making loads of false assumptions. I mean, the idea of a universal translator is wonderful but can’t work in real life. I mean, just think of two languages you know, like, I don’t know, German and English? So, you have these starship captains zooming around the galaxy. And every time they meet a new species they just turn on their screens (let’s not talk about all those very different kinds of people who evolved on very different planets using compatible technology, like, they are all communicating with something like radio waves…) and say, „Hello, I’m captain so-and-so from starship with this-name, welcome and would you like to be friends,“ and from the answer which could have been, „How dare you speak to me stranger?“ or „Whut?“ or „Why is thing beeping at me, please turn it off!“ they will then extract the whole language in a few seconds. Unless it is really complicated, then it might take a day or two.

Now. I have been learning and speaking English for many, many years. I’d say I’m pretty fluent now and I started in fourth grade (before having English lessons, I just stumbled across a book and some records my mother had bought for an English class and never really stopped learning. There are still things I can’t really say and mistakes I make. There are things I don’t know the words for which I have to look up. Like ‚record‘. I hadn’t used that one for so long that I couldn’t remember.

Now, they really try in that series. They invented aliens that found it offensive when people were eating in public. Nice. But they never have a culture that, I don’t know, relies heavily on gesture when communicating. Or a society where language changes depending on who you talk to. Like, maybe, let’s say German, where you address people differently depending on status and familiarity. I’m guessing that for a native English speaker it might be tricky to find out if „Sie“ or „Du“ is they right thing to say in a given context.

The boy got it right when he said that the differences between species in the Star Trek universe are smaller than the differences between different cultures and languages right here on Earth. Oh, and all the humans are Americans, by the way. And all the trials in the whole universe work like US American TV trials. And every engineer can just peer at a machine and figure out how to use it and tap the right button. „Oh, I’m just this guy from the United Federation of Planets who just happens to be fro Texas, Earth who can take half a look at the warp engine you have been using for decades and knows exactly how to repair it with parts that just happen to lie around in our cargo bay.”

For contrast I have been reading the latest „Foreigner“-novel by C.J.Cherryh. Here we have actual cultural differences between the humans and the Atevi. And she shows how much language and the way of thinking and feeling are intertwined. And how people who have good intentions still can end up killing each other because they just couldn’t understand each other. And how different factions of humans (and also of Atevi) can end up not really understanding each other when they have spent a long time apart living really different lives.

I still love the Star Trek universe and I appreciate what the writers and producers are trying to do but still.  On the other hand we are continuing to watch the series anyway.

We also had a lengthy discussion (the boy and I) after lunch about why the title song of Star Trek: Enterprise is abysmal and definitely demands to be skipped when watching the series every time but the title song for „Firefly“ which is roughly the same genre does work and doesn’t distract from the science fiction feeling. „Firefly“ does have more of a Western vibe on purpose, though. I mean, yes, the original Star Trek was conceived as „Wild West in Space“ but it didn’t really look like it most of the time.

Sorry, not sorry for the short excursion.

Today there will be the delivery of the fire wood, I will probably renew my prescription for my allergy medication because I completely ran out and I have no idea if I will be able to squeeze my Monday run in there at some point. Pretty full for a day off, methinks.