In a way it was a very good and productive day and in another it wasn’t. I got up at a decent time. Set a timer and found that it took me 16 minutes from getting out of bed to being dressed and ready to start yoga. Did yoga for 4 1/2 minutes before the boy showed up for his breakfast at 6.25. Um. I knew that he wanted to go to the climbing gym early but not that early.

So I made him tea, helped him look for his water bottle, fetched another one when it seemed the other one was lost. Almost started to work on the novel then waited for my husband to show up.

I knitted on a sleeve. It’s going super-slow. My husband decided to skip running again in favor of things to do in the garden. I did the weekly cleaning-thing. By the way I spent 1 1/2 hours on housework in the morning and another twenty minutes in the afternoon. Okay-ish, I’d say. That included making new deodorant. That takes 12 minuets, by the way.

It was only 11.30 when I was already done with the cleaning. I opted to skip changing the sheets, should definitely do that next week. Since there was still time and since I had been having a craving for potato chips since Tuesday I decided to go out, get gas for the lawn mower and buy some chips and chocolate on the way. As one does.

I really dislike getting gas. Since we don’t have a car I usually ride my bike over to the other side of town, lock the bike around the corner because strangely enough there’s no place to put your bike at the gas station, then walk up to the pump with my little canister, fill it, carry it inside to the cash register, pay, pack it on my bike and leave.

And I suddenly realized that I dislike the whole thing. And especially having to deal with the bike. The locking and unlocking and getting the panniers  out and all. So I decided to walk instead.

I like walking much better. I’m not as fast but I don’t have to deal with a heavy piece of equipment, I don’t encounter the cards as directly and I can listen to podcasts while I’m out. So I put the gas canister in my backpack, went to the health food store, got my snack foods, walked on to the gas station, behaved like an idiot because I only ever buy gas once a year or so and had completely forgotten how to do it properly, put everything in my backpack and walked back home again in peace.

My husband had just started cooking. Things weren’t going well. It had been one of those things. You start with, „We need to eat the chicken we took out of the freezer the day before that we ended up not eating because I got duck at the supermarket,“ throw in a bunch of Romana salads that need to get eaten as well and end up with the plan of fried Romana with goat cheese, fried chicken and bread. All very well.

If you’re my husband you then decide that since there is freshly harvested garlic and a handful of cherry tomatoes you will make bruschetta instead of just eating bread. Very well. You then proceed and find that you need two frying pans for the salad. And one for the bread. And that you’re all stressed out and have two handfuls of herbs in the fridge that need to get eaten as well. In the end you are super-stressed while your wife is frantically mincing herbs, slicing garlic and grating parmesan and keep saying, „I don’t have time to deal with the chicken!“ You resign yourself to having a vegetarian meal for lunch because now there really is no more time and put the chicken back in the fridge. And then you have to dice and fry the chicken after dinner so that it will keep.

And that gives you another challenge for your meal planning: what will you cook with the chicken the next day? Oh! Indian food would be great. Yes it would. Only the fact that we don’t have any spinach never made it onto the grocery list. 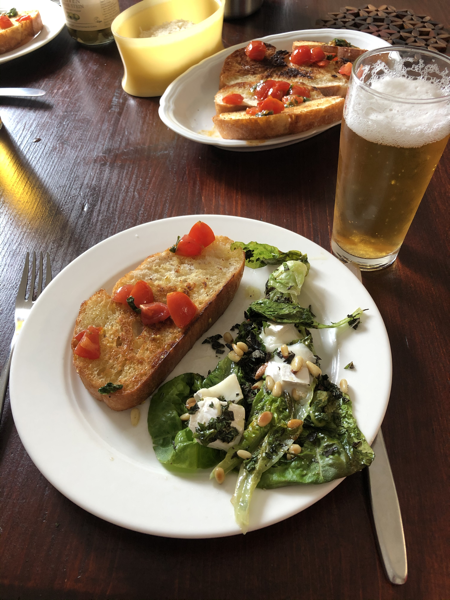 Don’t worry, I didn’t starve. I had seconds and two chocolate bars as dessert.

Then it was time to teach. Two students online with a short dishwashing break between and one student in person that I hadn’t seen in three months. That was fun. We had a lot of catching up to do.

Then I wrote a couple of emails, teaching admin, and then the boy and I watched an episode of Voyager and one of Firefly. Both pretty good. We pigged out on potato chips, caramel ice cream and beer in my case. The boy still prefers soda.

Then I started writing this post and went to bed slightly too late.

Today there will be the running, some folding of laundry, maybe the recording of the podcast (wish me luck) and the watching of TV.