I woke up early, turned around and fell asleep again. Oops. So I skipped all of my morning routine but had breakfast on time. Then, instead of working on the novel I did a lesson on the Affinity Designer course. And realized why I don’t like doing those courses at all: it is because I’m just so bad at it. I’m almost a complete beginner, everything takes ages and I’m feeling so clumsy. Which means I need to do it more.

I thought I would have a lot of time in the morning because I didn’t run or go grocery shopping but I barely had time to prepare the podcast but I managed. I got the camera set up with my ring light and mounted the mike on the small stand again and made a list of projects and of podcast feedback.

My husband made lunch all on his own: 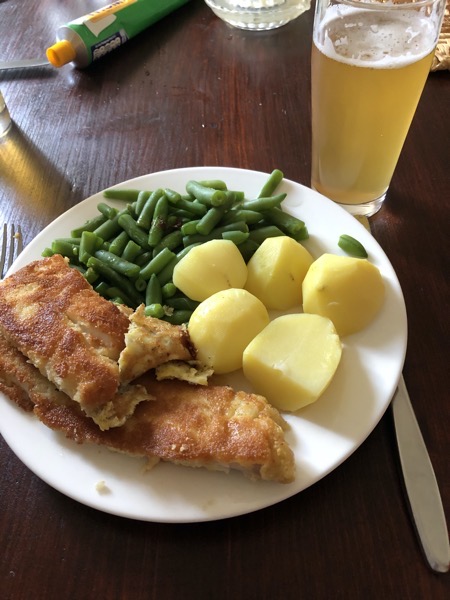 Then I only took a short break after that (and after doing the dishes) but still ended up starting the podcast recording a little late. So it had to be a short episode. The new camera worked just fine but it stopped recording after fifteen minutes. No idea what’s up with that. I think there should be a way to have it go longer.

I am pretty happy with the episode right now, so that’s good.

I had to stop in time to meet Eliandhra over FaceTime. We sat and knitted and talked for two hours. It was great. Talking to someone besides my husband and son is a real treat at the moment.

After that the boy and I watched another episode of Firefly, the one where they rob the hospital. Really good. By then I wasn’t feeling the knitting anymore, three hours that day was enough for sure.

After that I watched a Facebook Live for writers, started writing this post and made a plan for today.

Today there will be the weekly cleaning, the getting ready to teach in person again and, most important, the email to my students talking about teaching in person again. I really hope that I’ll get to do some work on the novel-in-progress as well and – and this just occurred to me – I also need to edit the podcast and get it ready to publish.