Yeah for the motivational power of a new gadget! The new watch made me actually get up at 5.30 and then I did yoga, meditated, wrote morning pages, made breakfast and spent 25 minutes on the novel. Phew.

I thought I was in for a very good day at that point. My husband showed and had breakfast, I knitted, the boy came down on time, all was well. Then I started procrastinating a little bit. I did the dishes and some chores and got read for going to the health food store.

When I popped into my husband’s studio to tell him that I was ready to head out he was pretty surprised. He had been waiting for me for an hour already. And I had completely forgotten about it. Oops. I was tremendously sorry but we decided that I should go ahead with the grocery shopping. I barely remembered to take my face mask with me after that.

When I arrived at the store I realized that I had forgotten my shopping list at home. Fuzzy brain hit again.

I came back, I unpacked, I helped to cook. My husband had had the idea of making egg biryani. Which was a really great idea and we have a nice recipe for it as well. And it gave us an excuse to finally use the clay pot we have been storing in the basement forever. Unfortunately, I only thought to check how long making the biryani would take at around 12.15. It said forty minutes. That would have meant lunch at the usual time. Only it said forty minutes of cooking time followed by an hour in the oven.

We had lunch an hour late: 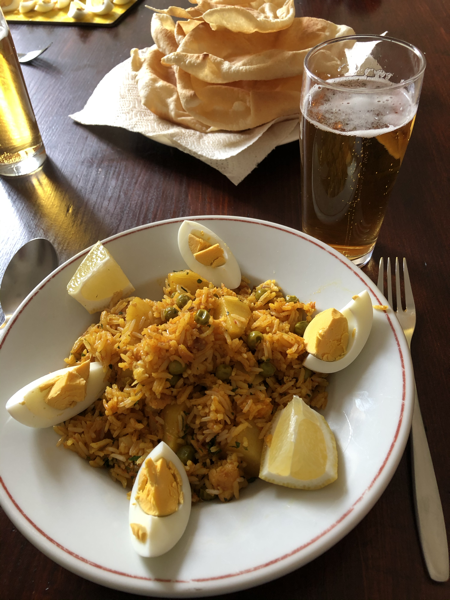 It was very good. We’ll definitely make that one again. We won’t be starting that late the next time, though.

The late lunch threw a wrench into my afternoon plans. I had wanted to work on the podcast for about two hours until my first student of the day. Instead I got about 45 minutes and let the dishes sit there all dirty.

I taught my two students for the day, the third one had canceled. Afterwards I spent some time on the internet and completely forgot to eat dinner. I had my very enjoyable virtual knit night with Eliandhra. I worked a bit on the sock-in-progress until I decided that I really don’t like the way the heel is affecting the stripe sequence. I pulled everything back to the heel turn. Here is a before picture: 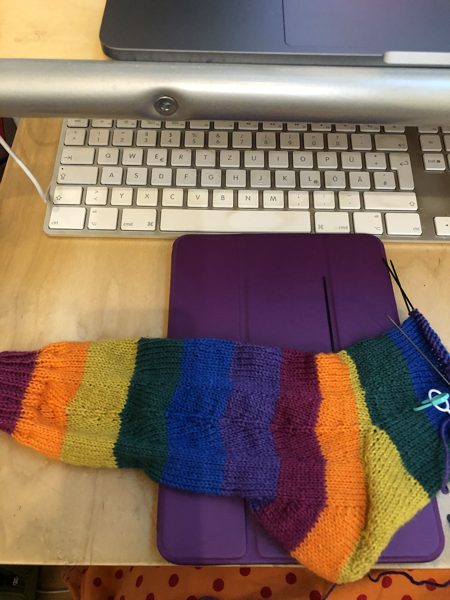 And yes, that is an exceptionally ugly yellow.

We finished pretty early because we were both exhausted. When I returned to the kitchen the rest of the family was busy doing the dishes. I ate some dinner, started writing this post, made a list for today, read a bit and went to bed.

Today there will be cleaning and laundry and quite a bit of teaching and then I’m looking forward to the weekend and to a whole week off. Almost two even. I’m hoping for some time to recharge.