Managed to do about two thirds of my list all in all.

I did wake up around six, did yoga, meditated and wrote morning pages. I was set on working on my novel but that didn’t happen. After breakfast I went down another research rabbit hole. I don’t even remember what that was about. Oh wait, knitting podcasts!

My husband came over a little late but his breakfast was pleasant and I made good progress on the cardigan I’m knitting. The sky looked rather gray at that point and like it would be raining any minute now. It took ages for me to get out the house for running. The boy was almost on time with his breakfast and helped me do the dishes. Then I decalcified the electric kettle. I did email and answered messages and then I went out to deliver some sheet music to a student. Put them in their mailbox without meeting anyone.

I went running and met quite a few serious runners. Rather unusual. Most of the folks who populated the fields during lockdown seem to have gone back to where they went before. I did intervals of 2 1/2 minutes of walking and running each. I have to say that I find 2 1/2 minutes of running rather long and tedious. I’m actually contemplating going back to a Couch to 5K-program. It all seems too hard and a little pointless. As if I’ll never be a real runner. Anyways, I didn’t get wet when out even without a jacket and was listening to a really pleasant episode of „20-minute delay“ about kits and lists and then to a Creative Penn-episode.

It was surprisingly warm and humid. 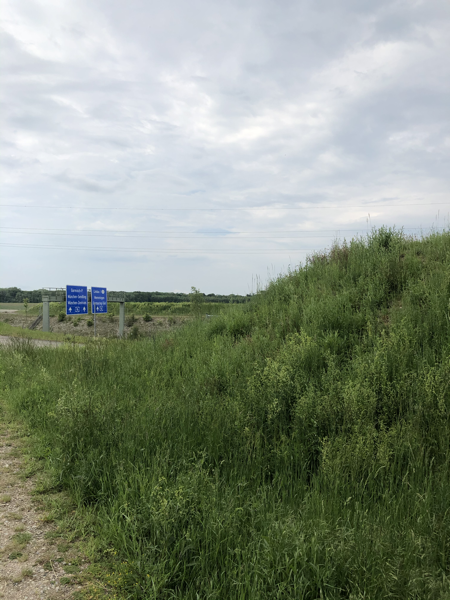 I wasn’t sure if I should include this selfie, I tend to look tense and dorky in pictures, apparently: 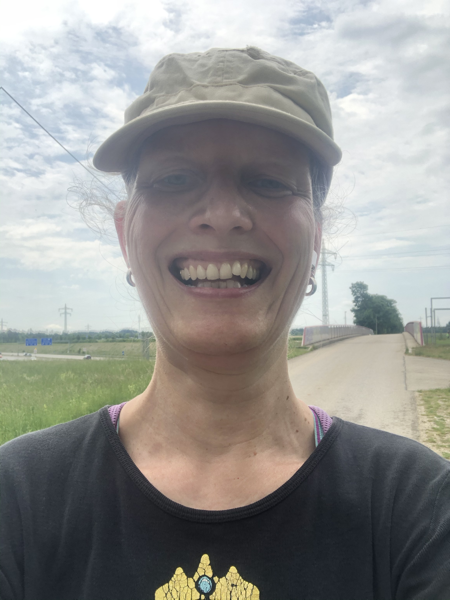 The hat was more against possible rain than anything else. And that is my „self-rescuing princess“-tee that has seen better days.

When I came back home it was almost lunch-time and my husband was still in cooking-overwhelm so I helped making salad. It tasted wonderful: 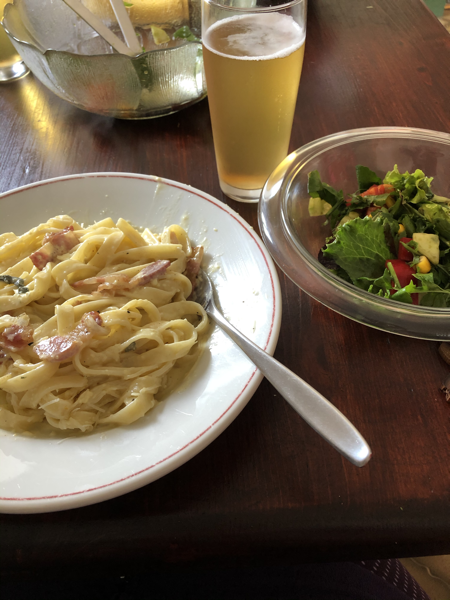 For once there was no Saturday slump, I did the dishes, took a short break, started preparing the podcast and then it started raining hard. Which meant – no podcast recording that day because you don’t want that sound of rain on the roof in the podcast. So I finally took a shower and went to install the new wifi router. Which went quickly and smoothly with only a short bump when I couldn’t remember how to connect the phone to it.

The boy reports that his wifi up under the roof is twice as fast as before so that’s something. And it will all get really speedy with the new plan on June 9th.

And that was it because it was time for dinner already. In between my husband discussed several things with me, as he is prone to do in the afternoon. Then the boy and I finished the endless extra long Voyager episode about the Hirogen and holograms. Near the end we almost missed the twist because we were both busy scrolling through twitter, ahem.

The day before we decided to pause watching Enterprise for now. We’ll start watching Firefly tonight and do that and Voyager until we’re through with Voyager and then we’ll pick up Enterprise again. We need a bit of change and the other two series are dragging a little at the moment.

After that I spent some time online, the whole family came back to talk to me, I started writing this post, wrote in my bullet journal and went to bed.

Today there will be: yoga, homemade gnocchi, maybe a phone call to my mother, the recording of the podcast episode and the watching of Firefly. Early to bed, I hope.