All in all not a productive day. Sorry for the whining. I’m full of ennui at the moment.

Tini commented on my post about waiting all the time with very sensible and reasonable tips. She is right, of course, and yes, I could do loads of things differently. I could even find some more solutions to my problem. The first step is realizing what bothers me. The next will be to do things differently.

But I continue to have a difficult time with these free-flowing days. At the same time I love having them.

Yesterday I woke up early and dawdled until it was time to make breakfast. Only then did I notice that I had forgotten to take my thyroid medication which meant I had to postpone breakfast.

I was sure my husband would show up early like the day before, instead he was late.

After the boy got downstairs – totally on time! – I put an online pharmacy order in. That took me half an hour because I had to find everything everybody wanted (including my mother-in-law), pushed a wrong button and ended up with 36 items in my shopping cart and had to delete most of those again and then make sure that I had everything we needed. Twice.

After that I did a huge pile of dishes. Then went out to run to late.

The weather was nice and warm, first time wearing shorts this year. There were lots of people outside but not too much. My earphones started acting up, the right one was mostly off. I found myself lazy and unmotivated so I cut my run short and mostly walked. Better than nothing, at least: 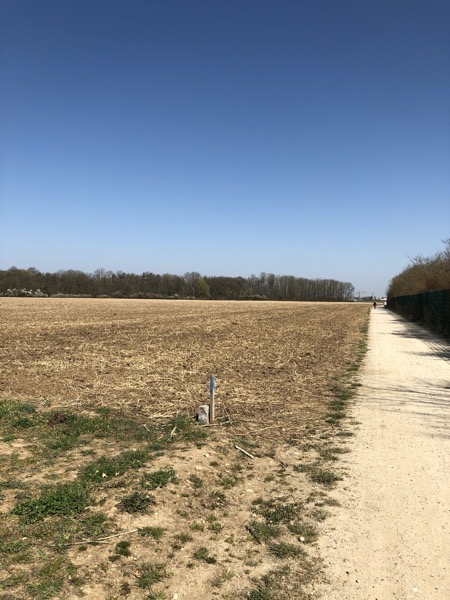 It’s pretty dry out there. Our rain barrels are running low already. 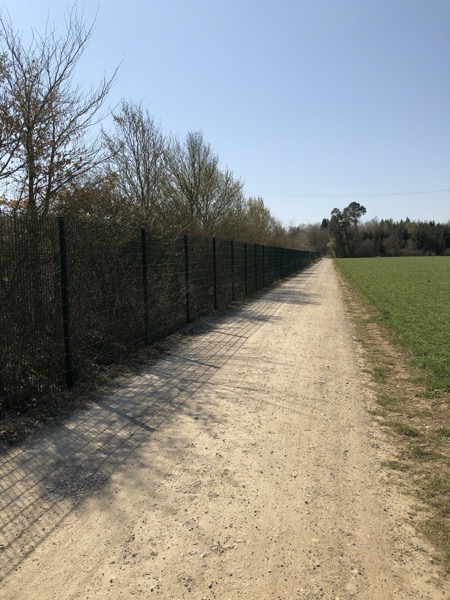 Then I helped making lunch, and started researching new headphones. Choosing things like that always takes ages. I really appreciate the range of selection but it often makes me paralyzed. Do I really need to choose between ten sets of almost identical headphones? I managed to choose a pair and ordere those. The boy was a big help. Not that I did what he recommended but I bounced my concerns off him and that helped me get clearer on what I wanted. 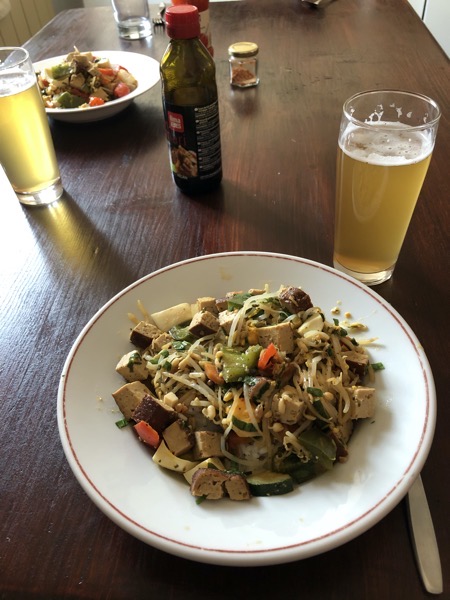 Then I took a break and procrastinated doing the dishes, taking a shower, writing, preparing the podcast, recording the podcast, seeing and spinning. I ended up reading my way through my new feedreader, postponing most of what I had wanted to do that day, then taking my shower and starting the dishes too late while listening to the Facebook live for the „Growing Gills“ book club.

One thing Tini asked about was if I couldn’t sit at my desk to write and tell everybody not to disturb me for a while. Great idea, of course. Now let me show you my desk at the moment: 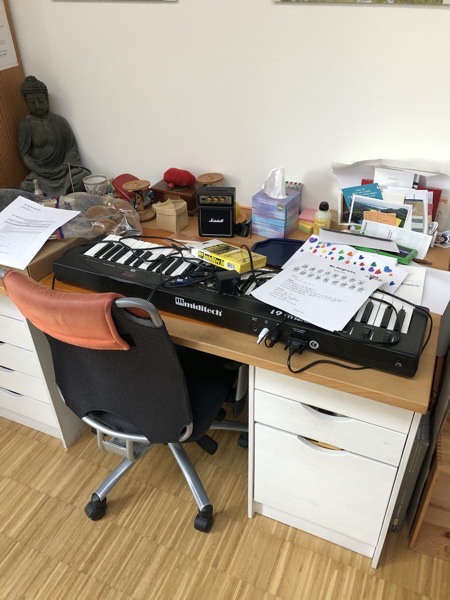 All of this is stuff I put there so I can record singing warmups for my students. Also, sheet music, a picture a student drew me and the form my mother-in-law and mother were badgering us about. Self-employed people who earned less because of the lockdown can get financial help. Which is good. They were both badgering us, not realizing that so far we haven’t made much less money than before. It is pretty hard to ask for money that I might have made if I had been able to teach someone in person. To ask for compensation for the new student who will start a month later. All of this is within the normal fluctuations our income follows. Most students are still taking their lessons, only online.

I did print the form out and put it on my desk so that the next time one of them asks us about it we could tell them that it is already on my desk, thanks, we’ll take care of it. Without lying.

Next up I need to decide whether I will actually record those warmups or not. I should probably move the keyboard elsewhere regardless. My whole studio is a mess. I am leaving everything I need for teaching out on the piano because there is less time to move things around and since it’s only me in there it doesn’t matter as much.

Interestingly, sitting in front of my iPad all the time while teaching feels as if I’m locked in that room much more than when I have my students in there with me. I have been really unwilling to spend time in there unless I’m teaching. I guess the problem is that I can move around more freely when the student is in the room with me but when I move out of camera range it feels as if I’m gone. You need to stay in front of the camera, otherwise the other person feels as if the call is over. Transitions between students are also quite different. When teaching in person there is always a moment between students. One of them leaves, the other one rings the bell, removes their shoes and coat and come in. I usually end lessons about two minutes early so that there is time for the student to pack everything up, for me to write down what we did and get ready for the next one to come through the door. Now there is almost no transition. It makes teaching pretty intense. There is also less lull, less chitchat and you have to stay way more focused. It’s not all bad, just something to get used to.

I taught my one lone student for the day, then did three online puzzles and ended up cranky and angry with myself. Yeah?

Of course today I’ll do everything different.

On the agenda there is: going to the supermarket, getting everything we need for special Easter meals. One student again but this time in the early afternoon which is good. I want to prepare the next podcast episode. Bonus points for writing the newsletter.