Woke up early, did not sleep enough, started my morning routine, then wandered off to Ravelry and social media. Had breakfast and spent the time I would have wanted to work on my novel trying to find out what went wrong with the RSS feed of this blog.

My husband showed up early and I started knitting while he had breakfast. I had a feeling the boy would be late again – and so he was. I went upstairs five minutes after his breakfast time and woke him up.

Then I conferred with my mother-in-law a bit, went off to the health food store and back home again. I was the only one wearing a face mask apart from the people actually working in the store.

Meanwhile my husband had made black beans: 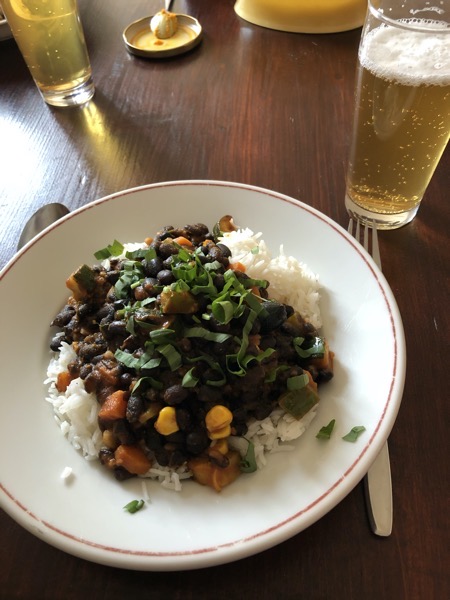 After lunch my husband found out why his stereo wasn’t working. The problem was not with the different cable we had used but with where the amp was plugged in. Since the pre-amp wasn’t on, of course he couldn’t hear anything. Phew.

I talked with the boy a little, then started teaching. In between students I looked at the ‚no images in the RSS feed‘-problem for the third time that day. What puzzled me was that I didn’t find any mention of the problem online. I had tried all kinds of things but nothing worked. Then I had the idea to see if the problem was with the feed reader I was using instead of my blog. What can I say – the blog is displaying images just fine, the feed reader was wonky.

I have been pretty happy with Feedly up until a few weeks ago but now I’m trying something else instead. At least there is no need to tweak my blog anymore. Unless anybody reading this has the problem with images not showing as well. (If you do you might try to switch feed readers… Just saying.)

My plan was to do some bodyweight training after teaching. I really didn’t want to. But I did it anyway.Then I started writing this post, procrastinated on doing the dishes – again – finished reading „Tangled Truths“ and really wanted to read the next in the series but it isn’t out yet and went to bed too late again.

Today there will be running, teaching one lone student and trying to make progress on everything else. Including making a shopping list for Easter food. I can already see that a lot of that won’t happen. Which is alright. I’ll try, though.