I woke up at 5.34, spent a little more time in bed and got up at six. I did not go online then because of that pesky timer I put on the wifi. Funny, how that was the first day I did my complete morning routine and wrote 700 words.

Then I spent some time getting the podcast up and communicating with students. I started doing the breakfast dishes early enough for a change and actually managed to do all of the weekly cleaning in time for helping to make lunch. Which was delicious pizza: 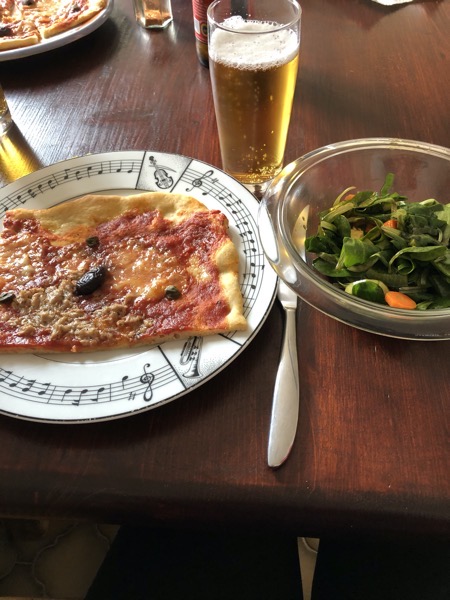 We sacrificed one of our precious packets of dry yeast for this. Since I need the others for making Hefezopf for Easter there won’t be pizza until there is again yeast in the stores. I have to say I was very happy to have bought dry yeast for emergencies. Usually I buy it fresh and we always have it in the fridge but there is none to be had at the moment. I know, first world problems. Maybe I’ll pull out my bread baking book and try my hand at sourdough. I’ve never done it before but I think I might have some rye flour around somewhere.

After lunch I did the dishes right away without taking a break and then I prepared my ukulele lesson of the day and told the world about the podcast episode being out. Then I taught four students over video chat. In between I scanned sheet music with notes so the students would know where to put the circles and fingerings and wrote more emails.

After my last student I had planned to do strength training but by then I didn’t really have any energy left. So I just did ten pushups with my hands on the kitchen counter and ten squats and called it good.

The boy and I watched a really good episode of Voyager and another one of the animated series that would have been good if it hadn’t been so sexist.

Then I spent too much time reading twitter, started writing this post and went to bed about an hour too late.

Today there will be more writing (I hope), a longer run/walk, prep for the next podcast episode, some online learning (I want to watch the third part of the sleeve workshop and a bit of the course on Affinity Photo.), some sewing, some knitting and some spinning.

The big plan for the evening is to watch „Isn’t it romantic?“ with the boy.I thought something funny would be a good idea but we both reserve the right to switch to something else if we don’t like it. It has been ages since I watched anything not-scifi so we’ll see. Part of me just wants to play it safe and rewatch „Ghost Busters“ or „Back to the Future“. We’ll see.

I texted the student who wanted an in-person lesson next Tuesday and canceled. I did offer her video lessons but she remains disinterested.

So, how are you guys holding up?