Woke up before six but stayed in bed a little longer and thought about things and people, as one does. So no meditation and no morning pages but some quiet thinking time and breakfast on time instead.

And then I actually wrote a bit of fiction for half an hour while my husband built a fire.

There was our new daily family meeting and just like every day there wasn’t really anything to discuss. I do like that each of us knows what the others hope to achieve that day.

I went upstairs to my mother-in-law and asked if she needed anything from the health food store. I have decided to continue my usual shopping trips to the health food store and the supermarket on Tuesdays and Thursdays because when I try to get groceries for more than a week it is almost impossible to get everything back home. Even with the bike. Last Thursday it almost tipped over because it was so heavy.

I came back home, put everything away (washing my hands three times) and helped making lunch. Which was excellent: 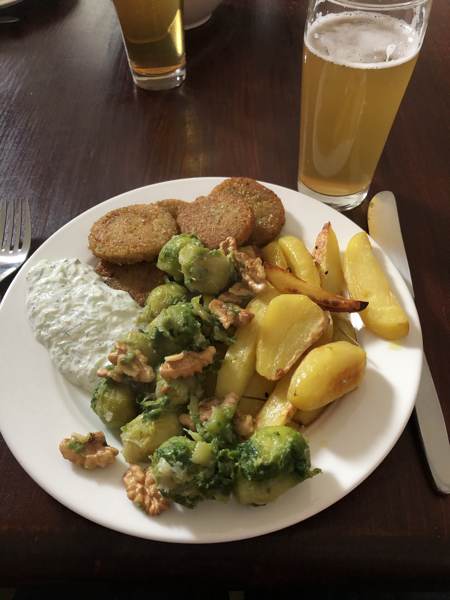 It’s oven potatoes, falafel thingies, Brussels sprouts with caramelized walnuts and tsatsiki. I had to look up how to caramelize walnuts for my husband because he was trying to recreate something we ate on his birthday at a restaurant. The falafel things are store-bought. They are good but I’m pretty sure that homemade falafel would taste better. So I looked up a recipe. We might try that next time.

After that I spent some more time sewing my face mask while watching a video about how to set in sleeves properly. If anyone is interested you can find the sleeves workshop here. Then I did the dishes, prepared my lessons for the day, taught three students and started editing the podcast in between.

After my last student I spent some more time on the podcast, putting everything together and just before everything was done and ready I found that the video and audio didn’t match. For some reason at the end of the whole thing the audio was behind the video by almost a second. No idea how that happened. That comes from recording on two devices simultaneously. I talked it through with the boy and tried taking the raw recordings in case I had done something without meaning to but the result was always the same. No idea why that happened.

I decided that for this time the audio I recorded on the iPad while filming had to be good enough for the video version, slapped a shortened version of the jingle on and called it good. This is not good, though, because I really love how the video looks. I could theoretically hook up my microphone to the iPad but that would mean spending 45 Euros on an adapter. I don’t know if I want to spend that right now. Recording the podcast the old way gives me slightly unattractive video and weird noises because the laptop fans always start working some time into the recording.

Just one more problem to pile on, I guess.

I decided to call it good slightly after 8 with a video version and an audio version of the podcast that I might be able to live with, ate a small bag of tortilla chips, had a beer, did some reading and went to bed.

Today there will be running and teaching and knitting and all kinds of things, I’m sure.