I woke up around six I think, feels like it was a week ago or so. Got up, decided to skip meditation and journaling because it was so late. I set the two clocks by hand that didn’t change on their on and had breakfast. My husband showed up with a great need to talk so we talked. I spun a little, for about five minutes and then I switched to knitting because it’s less hectic for the people near me.

Oh, and I found out that apparently the pictures I post don’t appear in the RSS feed. I don’t normally look at my own posts in a feed reader, I only take note if they show or not but happened to click on a post or two over the past few days and found that none of the nice pictures that I put in showed. Pity. There were a lot in the Saturday post, for example. No idea why that is happening and how to fix it but I thought I’d let you know.

My husband built a fire and had breakfast and then the boy. He keeps showing up on time or the 9.15 meeting. Hurray! He did school work again but I think he actually finished everything because by mid-afternoon he was no longer working in the living room. Hurray again!

I had big plans to clean the bathrooms and do yoga but instead I talked with my husband and then with the boy, prepared the podcast and knitted. I did help to make lunch but only a little: 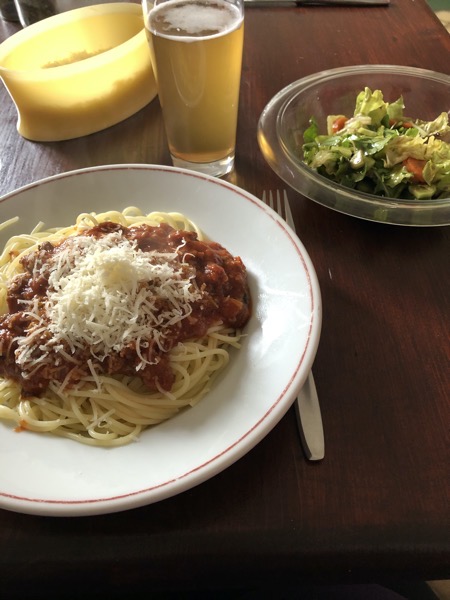 There had been leftover ground beed from the day before (already cooked, of course). More dishes after lunch and some chocolate and then I cut out the pieces for a face mask. I’m using this pattern (in German). I used a sleeve each from two old t-shirts that I’m no longer wearing and gathered all the tools. And then I ordered some new blades for my rotary cutter because I never changed the blade ever.

After that I went to the annex and started setting up for the podcast. I tried a new setup and had to do a few tests until the whole thing ended up looking like this from my side: 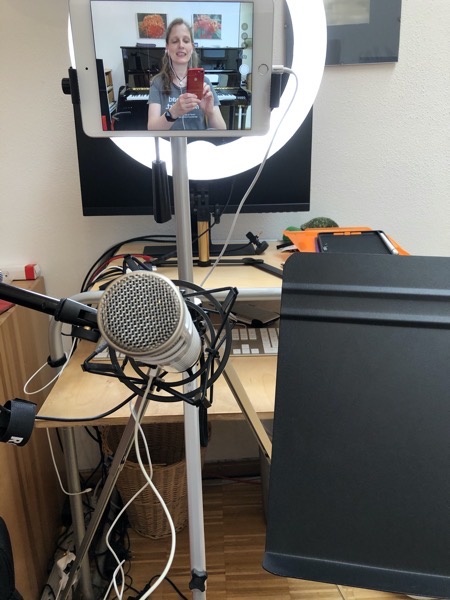 It’s not ideal, I don’t like the reflections on the piano behind me and I would have preferred to mount the tablet and the ring light on the same stand but it turned out that it’s not possible to fit the tablet in there with the mounts I own. Printing the list of things I wanted to talk about out in big letters turned out to be an excellent idea as well as using the music stand to hold it. Since I’m sitting further back than before and am putting the mic on a stand I had more room to fit the music stand in.

Since I recorded the English episode the whole thing took about two hours or so and I ended up late for my virtual knitting meeting. By then I was not really in a talking mood, sorry to my friend.

At 6.30 the boy and I watched some Voyager while eating dinner. The episode („The Voyager Conspiracy“) was somewhat boring and slow. I think the boy might have fallen asleep. So we decided to watch an episode of „Star Trek: The Animated Series“ as well („More Troubles, More Tribbles“). That one was fun, especially once I realized that the Klingon captain Koloth was the same that we had met on Deep Space Nine before. Of course, tribbles are always fun.

And then I watched some more of the documentary „Alive and Kicking“ about Lindy Hop.

Which meant I was somewhat late already when my husband wanted to talk some more.

I started writing this post and debated writing some fiction. And then I didn’t but instead spent a few minutes attending a virtual birthday party for one of my online friends on Zoom while spinning. Way beyond my bedtime. Again. But hey, party.

I did not do yoga, the bathrooms remained uncleaned and I didn’t really feel all that recharged after the weekend but that’s alright.

Today there will be running in the cold and gray (less people, I hope, than Saturday), some podcast editing and such and teaching five students online. And early to bed. I hope.

I’m also really hoping that we’ll settle down a bit in the upcoming week.