Yeah, there was a reason I didn’t blog last week, the past two weeks were slightly crazy. My voice is still not back to normal, the laryngitis is still lingering on. Maybe I would be all back to healthy by now if I had rested my voice better but needs must when you’re self-employed and when your husband has been planning a big thing for months.

Nope. Nothing to see here. I saved my energy for other things. Which means no writing at all this month. I did spend about fifteen minutes staring at the document and changing a word here and there one morning and ended up with – five less words than before.

I read 3 1/2 novels and a novella in those two weeks. One of the novels was a beta read for Marla Holt that I really, really loved. Can’t wait for the next one in the series. Unfortunately, the book won’t come out until May. I also started Lindsay Buroker’s Urban Fantasy novel „Sinister Magic“ and I really love it so far.

No exercise on account of being sick. I still walked to the grocery store and it turns out that walking back and forth to the party venue, making food and performing are pretty active but I didn’t feel like doing real exercise at all. I almost thought I had turned lazy until feeling well enough to attempt running last Saturday and finding that I was still pretty short of breath. I had to walk most of the way, not for mental reasons but because I was still not well enough, so that’s that. I did enjoy the walk, though: 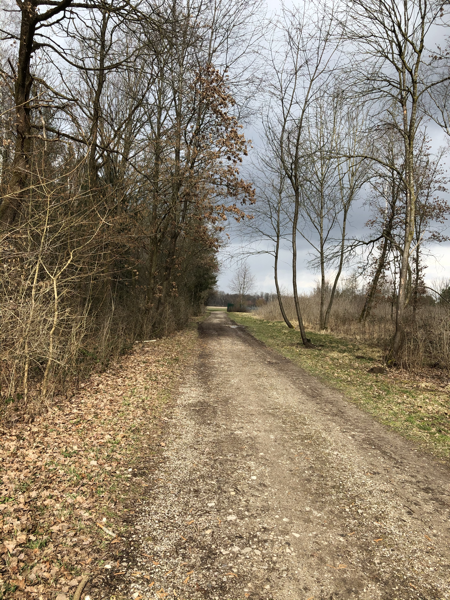 The slightly insane teaching continues. Even through carnival break because I used the beginning of the week to make up for the day I had skipped in January so that we could celebrate my husband’s birthday in Salzburg. So Monday through Wednesday were totally packed. And I still didn’t really have my voice back and was super-low on energy.

I guess you’re sensing a theme here. I was sick the whole two weeks, only doing the things I absolutely had to. I had low energy, almost no voice and a lovely intermittent cough. Up to the end I was not sure if I would be able to sing backing vocals on the weekend. In the end I did but I really shouldn’t have. I didn’t feel bad enough to cancel the whole thing, though.

I am getting better and at times I feel pretty normal again, hence my attempt at running. I’m still taking care that I get enough sleep and rest and such.

The big highlight of those two weeks were the back-to-back concerts we gave last weekend. On Friday all the musicians descended upon our house and we had our dress rehearsal in our basement. Everything went pretty well but we were crammed together: 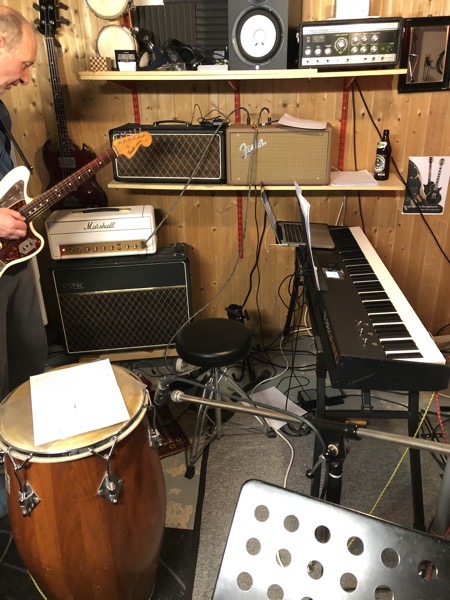 Only two people stayed overnight but we had to prep everything for that as well as for all the food for the parties and such. When I went grocery shopping on Thursday with the boy my bike almost fell over because it was so heavy.

On Saturday morning we got the keys to the venue (a basement that a couple of people we know rent for their private gatherings) and then we moved all the equipment there. Amps, guitars, keyboards, mics, stands, everything. While the others did the soundcheck I stayed behind to make all the food for the buffet and learn the vocals to „Black Magic Woman“ because it turned out that it was too high for the keyboarder and so my husband and I sang it together. You really need a male voice but doing lead vocals and guitar solo at the same time turned out to be rather tricky so I was hired to help. Unfortunately, I missed the crucial part both evenings. Oops. Everything else went well, even though the drummer played everything very slowly.

Saturday the venue was pretty full, we heard a guitar solo from one of my husband’s friends, then they improvised together, my husband played some pandeiro and then it was time for the band with some Santana and The Doors pieces. I would have loved posting some pictures here but I just realized that I don’t have permission to post the pictures a friend took of me and that I can’t post pictures of others without their permission. Sorry.

On Sunday we were already ded but needed to do it all again. The good thing was that everything was already ready, apart from the second keyboarder’s equipment and the buffet. So that happened. On Sunday evening there were way less people there, as expected. We had a different solo act, a second keyboarder. I didn’t like what he played as much as the guitar improves on Saturday but well, no accounting for taste. Other than that we played everything again. The drummer was even slower that evening, he was feeling the strain as well. That was the slowest version of „Riders on the Storm“ I’ve ever heard in my life. Almost surreal.

Still, the audience liked it, nobody lingered because everybody had to be back to work on Monday morning, us included and so we herded the musicians out the door with all our equipment. Then we went back to our place, unloaded everything, tried to keep the talking and drinking to a minimum with questionable success and I turned the lights out at 3 am.

I had told the boy to make his own breakfast the next morning but found myself wide awake only three hours later so I got up and started the day. We had breakfast with the second keyboarder and his wife, washed all the dishes and got them back to the venue, cleaned up after ourselves and gave the keys back, then proceeded to regular Monday teaching. Which is why I didn’t blog last week.

I’m still feeling the weekend in my bones a week later but am pretty hopeful that my energy will come back soon.

Looks like a pretty normal week. The boy has a lot of stuff happening, including two tests, a math competition-thing where he might travel to Passau on Friday and the first part of the ‚Cambridge Certificate of Advanced English‘-test on Saturday. I did move the podcast-recording to Thursday because I was just too exhausted yesterday and for once I have a bit of time on Thursday afternoon.

Since I ordered a new TV for the living room (very exciting!) I want to move furniture around some time during the week, we’ll see how that goes. I’ve been thinking about getting a second set for ages, and now that we have the new couch and the living room will become an actual living room again we decided against moving the existing TV there because my husband likes to watch movies and sports in the evenings after I have already gone to bed and the master bedroom is right next door. We are also finding that when the boy and I watch TV it often collides with things my husband wants to do in the annex or with sports that he wants to watch at the same time.

I am now picturing myself watching the Tour de France while spinning in the big, airy, light living room instead of the darkest and smallest room in the house.

So, enough excitement for the moment. I’m really looking forward to re-establishing my normal routines. (Yeah, I know.)