I woke up from the alarm well rested (::shakes pompoms::) all determined to get stuff done.

I did all the morning things up until the writing which I – didn’t feel like doing. Yes, I know that’s not a valid reason. Got up on time, made breakfast, talked to the boy, enjoyed the new yoghurt and actually started with the novel once the boy was gone. And realized that I needed more research.

So I looked things up until my husband was ready for his breakfast.

We got going pretty early, I started cleaning when the boy was back home again. Apparently 11th grade means a lot of free periods. Since he still needed to write a birthday card he wanted some hand-holding. So I rushed around with him trailing behind me asking questions.

Then he went back to school. I got the usual cleaning done in record time and then tried to call my father because of his birthday. Had to try three times before I got him on the line. Before, when I was still cleaning I had gotten a message from my mother that her oldest brother had died. When I talked to her briefly she said he had passed on Tuesday, so no idea why she decided the day of my father’s birthday would be a good day to tell me.

Now, I barely knew that uncle and he was 85 years old with a weak heart so while this is sad news it’s not earth-shattering in any way. I wasn’t quite sure if I was supposed to show at his funeral but since my mother only told me to call my aunt (her sister) because she had had an accident and broke her shoulder I’m guessing not. (It seems to be ‚aunts in hospital‘-week, my mother-in-law told me the day before that her sister-in-law was ‚back in the hospital because of her back‘. Now, we knew that she had been in the hospital, only nobody told us that she was back home at one point. Oh, and she had ‚some kind of procedure‘.)

But. My husband and I made pizza. On time: 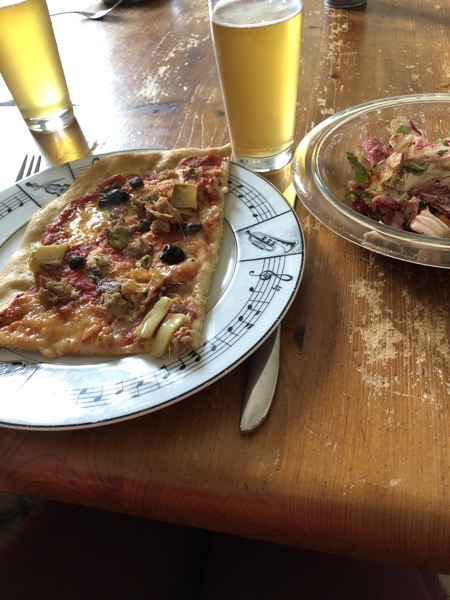 And it was rather tasty. Most of what’s in the salad was again from our garden, except the onions and the carrots.

The boy and I did the dishes, I published the podcast episode, got ready for teaching and then my first student was early.

Taught almost non-stop until six, with a short break where I talked to one of my husband’s students who want to take a singing lesson with me.

Then there was half an hour of bodyweight training, and then the blessed weekend with eating leftover pizza in front of TV watching the Marie Konto show. I had to watch something without the boy because he had left in the afternoon to attend a friend’s birthday party. His plans involved burgers, and escape room and staying up all night. Probably playing poker or video games.

I managed to go to bed at a reasonable time, at least.

Today there will be lots of reading and knitting, some running, some sewing and definitely some cooking. There’s a list somewhere, of course.