Well, finishing a novel late at night and then starting the next in the series turned out to be a rather bad idea. I stayed up way too late and that overshadowed the whole day. Also, I wanted to do nothing else but read the next book. (Fortunately it’s only a trilogy and I’m three-quarters done with the third one.)

So I woke up at 5.30 before the alarm and decided to use those extra fifteen minutes for reading. Which meant that I read and read until I was a little late in making breakfast. Boo.

Had breakfast, more reading, crocheted while my husband had breakfast and sneaked glimpses into my book (this time on the phone so it wasn’t as obvious) every time my husband left the room.

Then some more reading. I pulled myself together at some point, decalcified the electric kettle and changed the BRITA filter, did the usual chores and then went running. 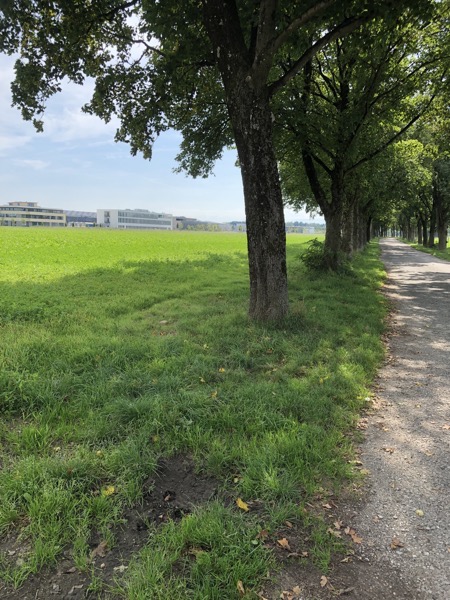 It was a little too warm and I was tired and hungry. 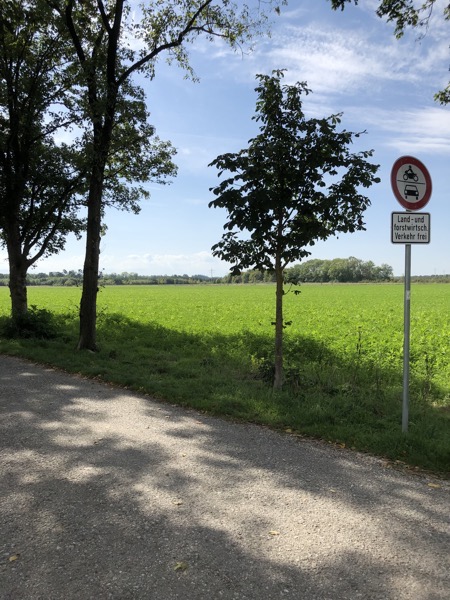 I had gotten out of the house a little too late, and so my willpower wilted in the sun and I walked most of the second half. 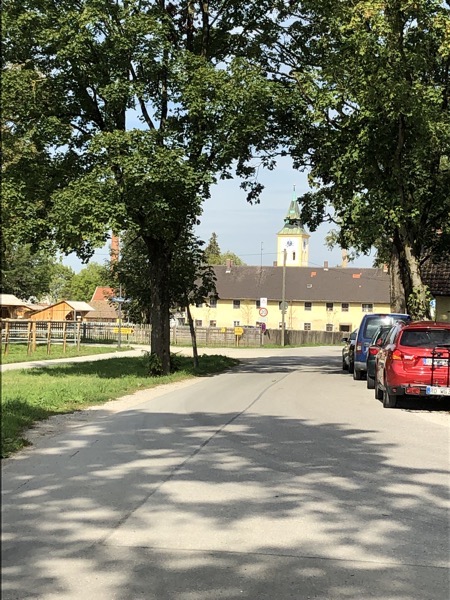 The pictures were all taken standing in the same spot, I just turned around. I then ran back towards that house and left and over the highway, through the fields and then the woods and then back home.

Where my husband was tending the potato beds. He had skipped his run in order to get ahead with yard work. We hastily threw together lunch because the boy needed to get back to school on time. He has a bit of a weird schedule this year where he comes home around 11.30 on Mondays but needs to be back at school by 2 until 5. This time the PE teacher had them come in, gave them nine pages of stuff to read and story for a test next week and sent them home again. They will be swimming but have to wait until the indoor pool reopens. His English conversation class was canceled.

Lunch was good, even though I hadn’t used enough salt: 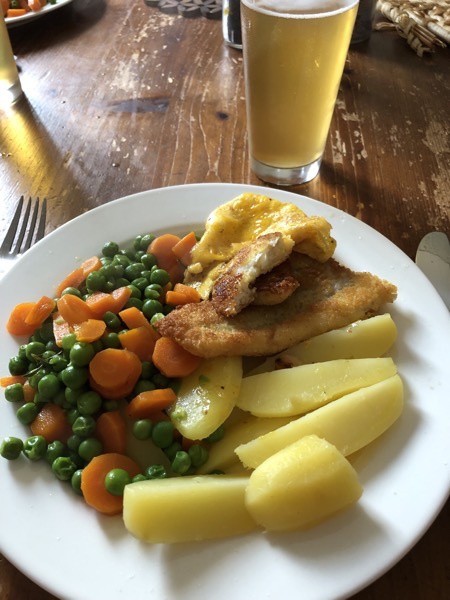 Only the carrots were homegrown.

I then had lots of plans and a long, long list but first I needed to take a shower, then do the dishes. Then I decided that I had enough and walked to the next supermarket for chocolate and gummy bears. Because that will make everything better. Especially the lack of sleep.

Things didn’t quite go as planned when my husband wanted my help because the computer in the basement that he needs for drumming lessons was acting all weird (fortunately it set himself right again just before I could install my old laptop there) and then the boy needed some more money and to order „Maria Stuart“ and we started the letter we need to send to the school so they allow him to skip school for a few days in October. He is going to that workshop thing again.

And then I met a potential new student. And taught all my usual Monday students.

Afterwards I packed my bag (I’m still using that laptop bag daily, best idea I had in a while. I added all kinds of chargers and hair ties and such to it.) went to the master bedroom, changed into pajamas and ate the rest of the gummy bears in bed.

The rest of the family showed up one after the other, my husband practiced drums, I read some more, started writing this post, finally washed my face and brushed my teeth and managed to go to bed on time for a change.

Today there will be all the errands and some teaching and some scrambling to get everything done today that I didn’t do yesterday. I need to learn a new song for a student until Thursday and write that letter and some novel-writing might be a good idea as well.

So much stuff that I want to do. Isn’t it great that things aren’t boring!