While failing at the big things.

I had my alarm set for six but turned it off and continued to sleep for another forty minutes. Seemed I was still rather tired, no idea why, I did get enough sleep and according to my Fitbit I also slept well.

So no morning routine, just a bit of reading and then breakfast. Then crochet. Got the new Seanan McGuire, „The Unkindest Tide“. I do love that series and am enjoying this one so far as well.

Then my husband started talking about our plans for the day and I mentioned that we had talked about going to the bank together and that threw him a bit off because he doesn’t like to leave the house in the mornings and he certainly doesn’t like to go to the bank. We discussed it a bit because he wanted to prepare for recording later in the day but finally agreed to just get it over with.

Now, the problem is that my husband received a letter from said bank (not the one we usually use) telling him about the balance in a savings account that he didn’t know he had. We looked for the little book that he should have to go with the amount but there was none. And his mother didn’t have one either (the bank was the one she uses). So a few weeks ago she agreed to ask about the account but couldn’t. So he wrote her an authorization but still, she couldn’t find out anything. Which meant he had to go in person. Which also meant that I couldn’t take care of it on my usual round of errands. (In our house I’m usually the one dealing with bureaucracy and finances and such.)

So we went there, just as half the town was in the streets, of course, went to the bank and got that account sorted. I mostly came along to hold my husband’s hand and despite the fact that we got a teller with limited experience everything went well. My husband is now the proud owner of a new book for his savings account. With some money that he didn’t know he had.

We went on to the bakery for bread (and a bottle of wine) as one does. When lining up for our bread my husband looked out in the street and saw a fire at the horizon. It turned out to be a farm burning at the edge of town. I’m not sure what happened yet but it seems no one was injured and the firefighters were there quickly, the fire station is only 500 meters away.

We walked back home (nothing for us to do about the fire and we had already heard the sirens before) and made lunch: 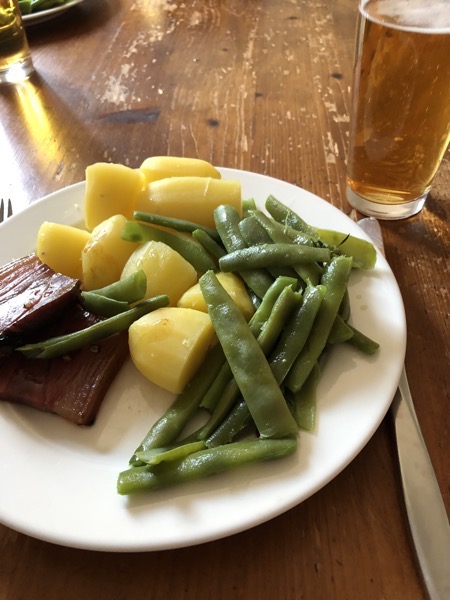 Frying bacon like that turned out to be a bad idea, by the way, not recommended because it turns hard and chewy. Other than that everything was great.

Did the dishes, had a break where I read and crocheted and then my husband showed up to discuss household stuff with me. The good thing was that this time he had told me beforehand.

So we talked toilet seats and finally ordered a replacement for the one that has been broken for weeks. And then we talked about the bell plate outside that nobody could read and that had gotten grimy and ugly. I had „get new bell plate“ on my list for months and months but just yesterday I had the idea that I could maybe find some brass polish and try to clean it first.

Turned out that with the two of us helping we actually managed to get the thing out, polish it and put it in in a way that both names are better readable. Huh. It also turned out that my mother-in-law must have cleaned her nameplate regularly. I didn’t know that one had to do that. I mean, if I had thought about it for a minute it would have occurred to me but I had never ever see someone clean that little plate. Duh.

Then I sat down again and finally tried to get some words written. I did but the scene I was writing was not very good and didn’t go anywhere and I felt totally uninspired. I thought I might have to chuck it completely. And think about what will happen next.

At least I tried.

I didn’t manage any of the other things I had wanted to do but getting small niggling things done is necessary too.

The good thing was that after a nice dinner of Brez’n, boiled eggs and cheese, some chocolate and two episodes of Star Trek I felt inspiration strike again and wrote a bit more. Made me a little late for bed but that was worth it.

Today I want to go for a run, help to make lasagna, teach a coupled of students, write all the words and cross some other stuff off the list.