I woke up at six from the alarm and actually meditated first thing. Didn’t lounge in bed (much) but got up and made breakfast. Because my husband had his colonoscopy at 8 we needed to leave by 7.30 and I wanted to have breakfast and be ready before then. Poor husband had to wake up at 4 for colonoscopy prep.

We got ready in time and left the house, caught the train and everything went smoothly. I had had hopes of getting some writing done while at the doctor’s office and I did finish a book on how to write romantic comedy (not that I actually could do it) but then there was a little girl waiting for her father and she was watching videos on a tablet. She did wear headphones but the sound was loud enough that I could understand every word right on the other end of the room. Nobody said anything and it wasn’t all that important but my focus went out the window right then. I didn’t even have my own headphones.

I had accompanied my husband just in case he needed me on the way back. He didn’t really but found it nice anyway. One always feels somewhat weak afterwards and he had been afraid there would be bad news. His father was about his current age when he was diagnosed with colon cancer and died a few years later. Which is why my husband is usually rather diligent in getting those colonoscopies every few years.

Everything was perfectly fine again and the doctor wanted to do some more routine checkup things but my husband was rather happy afterwards.

And here comes my customary announcement to get your checkups. Yes, colonoscopy prep is not all that pleasant but colon cancer is way more unpleasant. And can be easily treated if it’s noticed early enough. I wouldn’t have thought that that is such a big issue for many folks but when my ob/gyn told me to get a colonoscopy after I turned fifty it seems he didn’t expect me to actually get one. I mean, I have had better days in my life but really? People skip a medical exam because it’s unpleasant?

In a way this is rather fascinating but in a different way, like, in a common sense way this is completely unacceptable. „Yeah, you see, I would have had an uncomfortable 24 hours where I wasn’t allowed to eat and had to drink all this weird stuff. So I opted for dying of colon cancer instead. Which is much better. Of course, this is perfectly reasonable.”

I mean, I know people do things like that all the time and it isn’t like I’m behaving rational all the time but I’m drawing the line somewhere.

When we came back home the boy wasn’t up yet so I stormed his room and woke him. (He asked me to, by the way, plus I needed the thermos he had liberated the day before). He and my husband had Brez’n while I suffered in silence. I later caved because I was rather hungry and ate a handful of almonds.

Then I went on my walk/run. I have now reached the point in the 10K program where I run and walk for equal amounts of time. Well, at least in theory. As predicted I found many excuses to cut my running intervals short. I have to say that my willpower seems to be at an all-time low at the moment. Also, I managed to pick the one hour in the day where it was raining buckets: 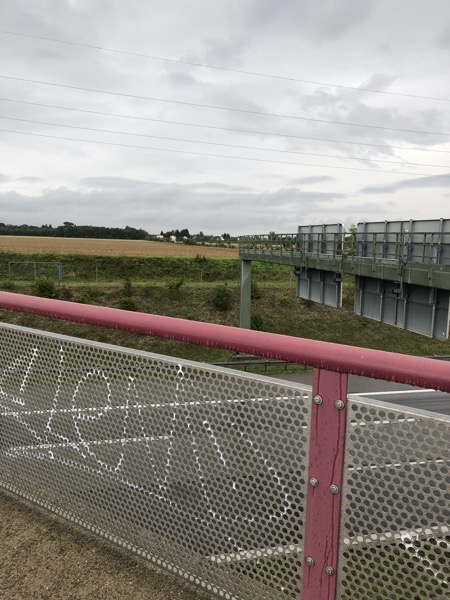 This was my very unglamorous halfway point. The rest of the way was all fields and woods, by the way.

My husband was nice enough to cook without my help so I could take a shower before lunch. It is rather nice to not eat lunch cold, wet and mud-splattered. I was rather hungry: 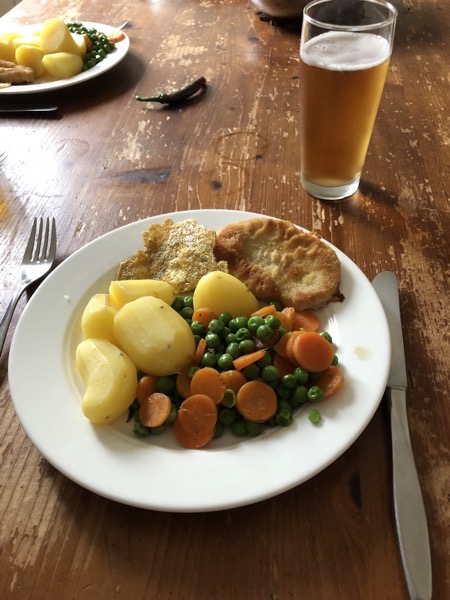 And then I spent most of the afternoon playing a new game on my iPad. The game isn’t all the good, even, I just can’t stop playing it. The one thing I did manage was to make deodorant but I ran out of soda and so I could only make a very small amount.

Then it was time to watch Star Trek. We only watched one episode of „Deep Space Nine“. I liked it and it had a surprisingly complex message.

Then I played that stupid game some more and stayed up too late because I felt bad about not getting anything done, as you do.

Today there will be some grocery shopping. I’m not quite sure if I should aim for all the errands and all the grocery shopping on this particular day because Thursday where I would normally go to the supermarket will be a public holiday. And tomorrow is running again.

Later it will be time to wait for the wood delivery and I will teach one student. And plan the podcast. I hope.