Well, that went different than expected once again.

I woke up late, at 6.30, lounged in bed, took my thyroid medication a little late and had breakfast. Then waited for the boy to show up. The plan was that we would start making lunch at 11. Instead of doing something productive while waiting I just sat there knitting and reading „Reticence“ (great book!). I found that I was rather anxious about the impending dentist’s appointment. I did water all the plants but didn’t do much more.

So the boy overslept and only got downstairs around 11.30. So I made the executive decision to eat sandwiches for my (rather early) lunch while he finally had breakfast. Did the dishes and went off to the dentist.

The dentist appointment was less stressful than anticipated. Interestingly the tooth that had lost its crown was not a dead one as I had bee told before. Which explained why that tooth had been hurting for two days now. Not all that bad but a little uncomfortable. It turned out that my file said the tooth was dead but the x-rays told a different story.

The crown I had lost and put back again was sitting so tight that the assistant had to fetch pliers to get it off. They cleaned the tooth, put some cement or glue in (or something) and put the gold crown back. Then the x-rays which showed that everything was peachy and my implant is looking good as well.

A first: nobody asked me if I was pregnant before x-rays for the first time in decades. I had a little chat with the dentist, was advised to not eat for an hour and toddled off. Then I shopped for Brezen and sausages and went back home. Waited for half an hour or so and then made a rather late lunch: 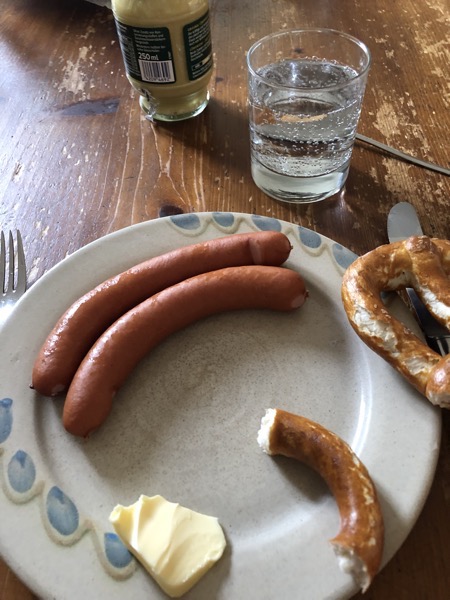 The boy had vegetarian Weißwurst.

Then I would have had enough time to do most of the things on my list but found myself oddly paralyzed and playing games on my new phone.

I decided the day was a bust, gathered the boy, we watched an episode of Star Trek and then it was time to wait for my husband. Since we were finished with watching TV right in time I walked to the train station to meet him. We talked and told each other at least some of the stuff that had happened over the past three days. I went to bed a little late, glad for him to be back but a little unsure about what to change in order to feel better about summer break.

Right now I am having a vision of me sitting around getting crankier and crankier until school starts again. Which is not that unrealistic. I have had Augusts like that in the past. Bleagh.