So over the last week I found that something had to give. Which is why I no longer am writing here daily. But I do miss it. The other thing I found is that I am back to needing nine hours of sleep, apparently, so I moved my wakeup time back to six o’clock and am trying to turn the lights out around 9 pm. Which doesn’t leave me much time for writing. Well, at least not if I live my life as usual.

Writing has been really meh the past week, I managed to write less than 2,000 words all week. Which means I won’t reach my Camp NaNo-goal. I’m not quite sure yet if I care but am still trying to make myself write 3,500 words a day to catch up. Stay tuned. I did adjust my goal down from 45,000 to 25,000, though. The terror of being that far behind did contribute to my block and I don’t need that. Note to self: do not attempt Camp NaNo in July again. Thanks. 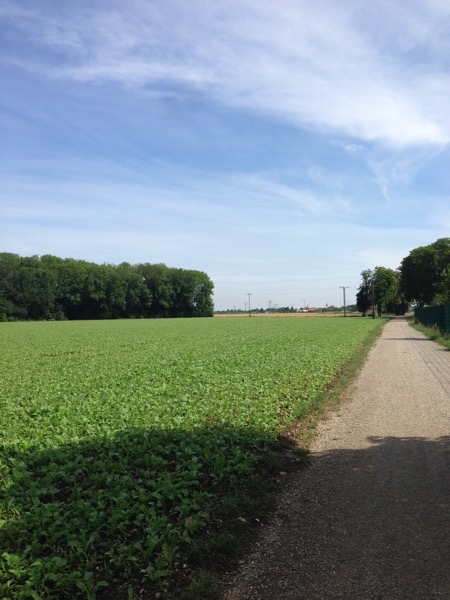 Once again I forgot my bandage. Not the best move but it shows how much better my knee is right now.

We had girandole arrabiata for lunch because we ran out of penne: 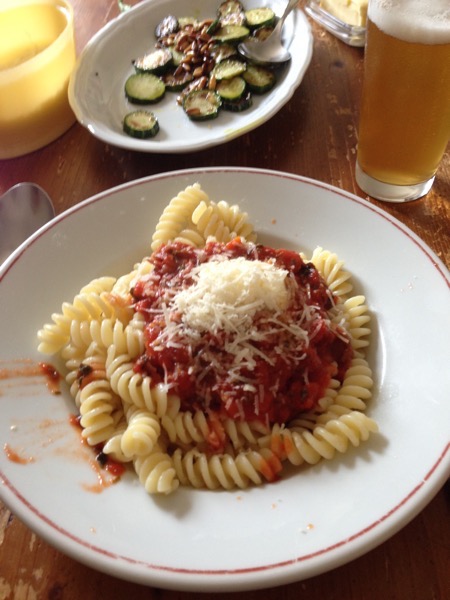 Zucchini from the garden. Very yummy. During the meal we had to look up pine nuts on wikipedia. Of course, they aren’t really nuts.

The boy was really low on energy because he had to run (literally run) for about an hour at school. They had a charity run-thing. Which meant that for once he ran more in a day than his parents. (My husband ran 8.5 k, I walked/ran 5.1 and the boy did 9.1) So I went out and bought some chocolate because we were all out. And got some tongue scrapers, as one does.

When I started teaching it was already 27 °C (80 °F) in my studio and becoming warmer by the minute. I skipped the makeup because it wouldn’t have made a difference anyway. I was sweating so much that my eyes burnt. While teaching guitar and piano which are not the most strenuous activities I can think of.

It’s supposed to become really hot over the next few days. I do have a fan and know how to use it, though.

I answered a few emails, answered the boy’s questions about how to fry leftover pasta and scrambled eggs and when I came to the kitchen he was already eating. My husband was very happy and pleased to have something warm that he didn’t have to cook himself and double happy and pleased that the boy had been cooking.

I got ready for bed on time but my husband was still practicing „Oye Como Va“ in the basement (That is for the small, intimate, spontaneous concert he is planning for next year. You know, the one where he just shows up and plays stuff he already knows inside and out. Well, it turned out he doesn’t know this song as well as he thought he did, 47 years of playing it non-withstanding. I already got pressed into playing cowbell or guiro and singing backing vocals. I won’t start practicing anytime soon, though.)

Today will be more of the same with running errands and shopping at the health food store instead of exercise. I am continuing my knee exercises and they continue to make a difference. It’s all rather interesting.