Woke up from the alarm, wasted the first hour of the day, meditated for a bit, opened the writing program, stared at the novel, deleted a few words and closed it again. Being all motivated didn’t really make a difference.

I made breakfast and the boy got up and I started reading „Resilience“ by Linda Graham. Very interesting. After the boy left for school I finally managed to get writing and had so much fun that I went on until my husband showed up.

While he was making and eating his breakfast I spun a bit of sweater yarn: 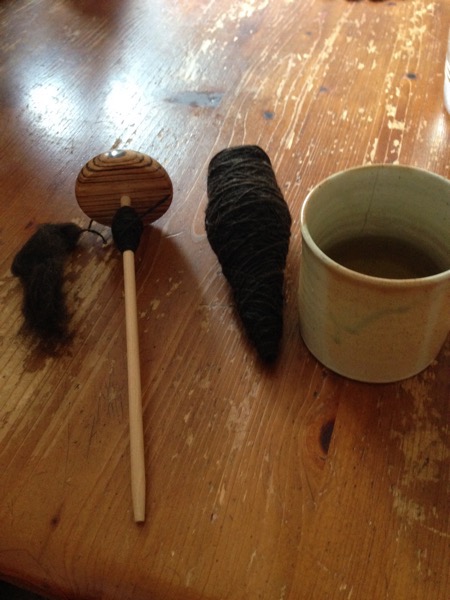 That’s the cob of a full spindle and the start of the next. With mint tea in my favorite mug.

When I had planned for the day I had been sure that I would have another hour or so to write between breakfast and lunch. Well, it turned out that that hour was needed for conversation with my husband and cutting his hair. We did the breakfast dishes together and then my husband went running while I wanted to clean the house.

But first I did some research on the internet. Which meant that cleaning somehow did take more time than planned. Weird that.

I also read this eye-opening post about the question if it is possible to make a person change. Spoiler: No, it really isn’t. But what he wrote after that was really, really helpful for me and very timely. So in order to help people you can:

Yes, you should go and read the article. Because this list doesn’t make sense without it. I’m only typing it out so I remember it myself. I especially like the advice to lead by example. Because that usually helps at least one person. And that would be yourself. If it has an effect on someone else that’s even better.

Which reminds me of the advice the school psychologist at my son’s school gave when a father asked her how to make his son read more. „Read more yourself,“ she answered, „show him that reading is fun.”

And reading that article on making people change led me to another one, you know how these things go. Yes, I will finish writing my novel eventually. I’ll just go down a few more rabbit holes first.

I did manage to clean all the things and get the pizza ready for lunch but nothing more. Pizza was good, though: 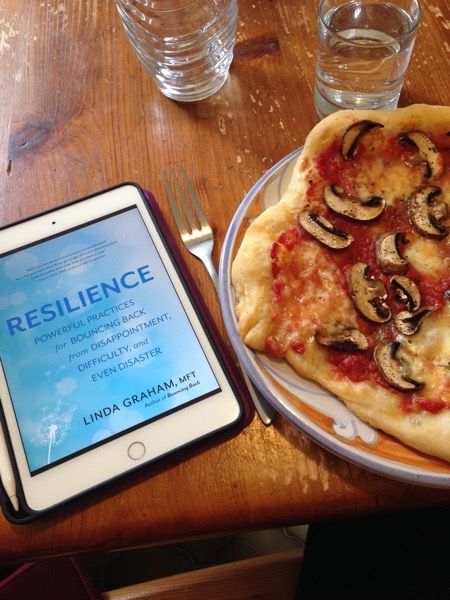 The boy was happy and excited that his new cell phone arrived. He had expected it a day later. The new phone is rather big and shiny and he loves it. We ate and talked and he showed me the phone repeatedly until I had to get ready for teaching. Because I was a little late I asked the boy to do the lunch dishes which he did. Eventually.

My first student had a breakthrough and that made me really happy. Teaching was actually fun. While I had a short break the boy told me that the SIM card he had was too big for the new phone so I decided to go to the phone store after work. Which we did.

And I walked all the way without my bandage and had only minimal pain. Yeah!

When we came back it was time for dinner and Star Trek. The bread and cheese looked rather inviting so I had some. Then I did my knee exercises and got ready for bed. No more writing even though I had really been looking forward to it.

So, today there will be writing and then some more writing (I hope) and spinning and I want to watch the Tour de France for a bit and that will basically be it. Oh, and reading of course.