Woke up at 5.15, not enough sleep yet again. Still, I did manage to do all the morning routine things. (Is it still a routine if you only do it once day out of three?) I was all pumped to write like the wind and do all the things.

And then the boy showed up. His right cheek had puffed up to twice its usual size overnight. Probably something to do with the wisdom teeth pulling. But he was feeling well enough to go to school. Not that he loved the idea of showing up there looking that asymmetrical. At first he said he wanted to leave it for a day before calling the doctor but I outvoted him. Well, vetoed.

So when he was off to school I called the oral surgeon’s office and got an appointment for him for 4 pm.

I still managed to get a few more words in which was a marvel in itself. My husband showed up and had breakfast and we talked and I knitted a few rows. By then I had entered the state of catastrophizing, where every minuscule problem becomes monstrous and huge. My painful knees meant that I would never run again, the boy would need surgery and die on the operating table, you know the drill.

I pulled myself together, somewhat, did the breakfast dishes and started tackling the list. I made sour cherry jam and forgot to take a picture (imagine twelve glasses of sour cherry jam here) and then we made a Persian lamb dish for lunch (Khoresh Abaloo, if I recall correctly): 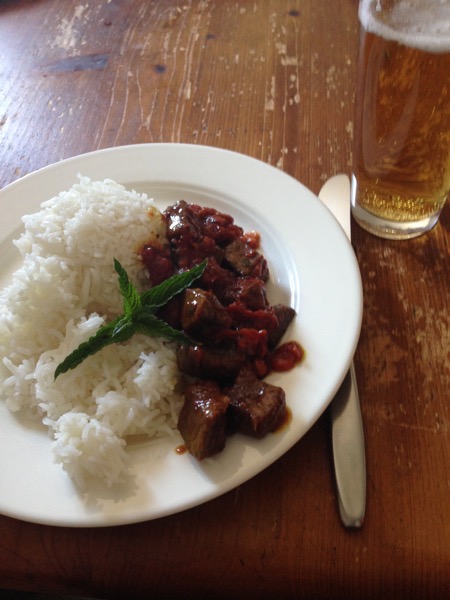 Very, very tasty. Next time we might even try to cook the rice like they do in Iran. On a weekend.

Then I did some admin, worked on the podcast for an hour, taught all the students, finished the podcast to get it publishable, had a bit of dinner (because I’m taking an anti-inflammatory for my poor knees), made pizza dough and went to bed too late.

The boy showed up when my next student was conveniently late, said that he must have gotten a bit of food into the wound and that the surgeon had cleaned it out and cared for it. He has a follow-up appointment in ten days or so. Things should be back to normal shortly.

Today there will be the cleaning and the pizza-making and all the teaching and more writing and loads of things.

Oh, and the cool packs were one for the boy and one for my knees. And no, I’m not quite sure what I did to them, it might be a combination of damage from the balcony project combined with not moving enough and then too much and then stretching too hard too sudden. As I said, I’m not quite sure. They hurt after resting and after movement but not while I’m moving. Icing and the anti-inflammatory seem to make things better.