I didn’t sleep well. Something fell from the roof around midnight and that had me sitting in bed wide awake. In addition to that there was also a weird low sound reverberating through the house. I wandered through all the rooms until finding out that that sound was the dehumidifier in the basement.

The plan for the day had originally been to go grocery shopping in the morning and write in the afternoon between students but that got a little derailed.

I got up late, had breakfast, talked with my husband, did the dishes and the boy was still not up. So I went out to the bakery, the butcher, the post office and the health food store. There were a lot of people out in the streets cleaning all the leaves and twigs from the sidewalks. There were side streets full of debris. And we heard the sirens all day. That hailstorm was a doozy.

I got everything I needed and sent off the taxes (yeah!) and then found the health food store closed because of hail damage.

So I walked back home and decided to go to the supermarket as well.

The rest of the family had already started the cleanup. Even the boy was outside putting shingle shards in containers.

We had an easy to cook lunch: 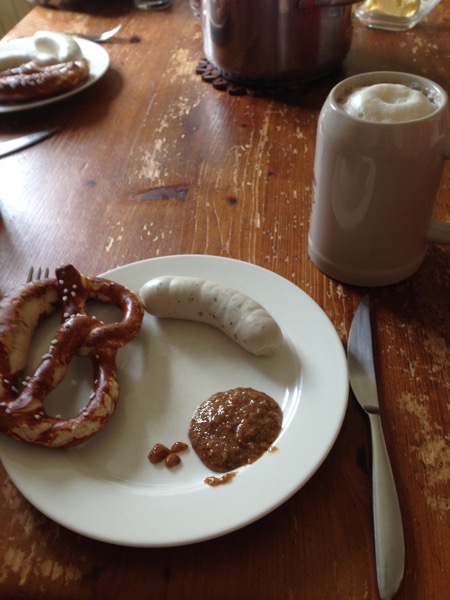 We took a bit of a break after that and then it was time for me to teach my first student.

Afterwards I went outside and helped raking leaves until it was time to teach my second student of the day. Everybody I met talked about the hail and what things broke or didn’t break. My mother-in-law had talked to insurance and had found out that we need a quote from a roofer next, so my husband called the guy who did our roof the last time. He’ll come by some time today and look at it.

And then it was dinnertime, the boy and I watched an episode of Star Trek and I went to bed pretty tired. I walked 16,500 steps that day so that might be part of it.

Today I want to go for a run, go to the dermatologist with the boy, pack for the trip and go to bed early. Writing might be a good idea as well.