I didn’t sleep well and when the alarm went off at six I wanted to sleep some more. Wrote morning pages after meditating for five minutes and made breakfast.

I did knit on the t-shirt some more and read a bit and my husband got up rather late. We talked and then we found that my mother-in-law had put one of her little notes at our door that said, „Your aunt will come over tomorrow with her car to get stuff to the recycling place. Recycling is on the right side of the garage, right?”

Um, not quite. And so we spent half an hour upturning everything in the garage to sort out stuff. And deflate a million boxes. And decide what to keep and what to throw away. Fun!

Then I limped to the nearer supermarket. It took so long that my patience was severely tested on the way. I had to make tiny steps so I wouldn’t aggravate that calf muscle. I was feeling better than the day before but I still felt ridiculous, crossing streets at a snail’s pace.

When I came back home my husband was in a panic because he had just come back from his first run all week and was rather late in making lunch. We did manage, though: 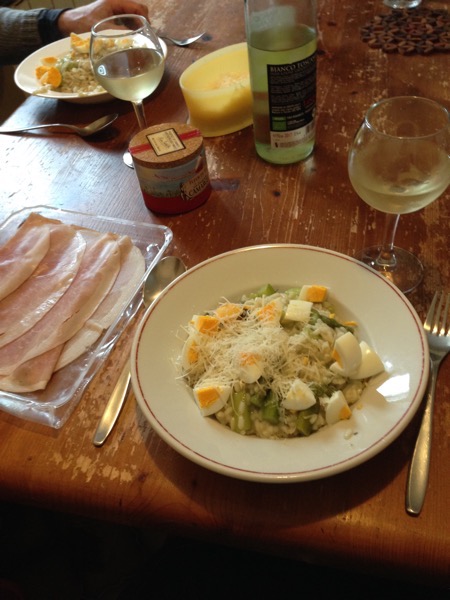 That’s asparagus risotto. I know it’s hard to see under all that egg and parmesan.

Then I did the dishes right away and taught half a dozen students. The first of which told me to take magnesium to help with my leg. After a bit of research I thought that was a brilliant idea so I limped back to the health food store. This time I limped a little faster, though, because I wore boots instead of my barefoot shoes. The stiffness of the boots made walking easier.

Then there was dinner and chocolate and an early bedtime.

Today I am hoping to record another podcast episode, teach a few students and not much more.