After going to bed too late I woke up at 5.10 and promptly didn’t do anything for half an hour or so. But then I actually meditated for five minutes, wrote my morning pages and – drumroll, please – worked on the novel for 45 minutes. Phew.

Had breakfast with the boy who was frantically studying for a Latin test. My husband showed up just as the boy was about to get ready for school, so much earlier than usual. Which was good. For a second there I was sad because I had planned to write some more until his breakfast but I reasoned that there would be time for that later. (Spoiler, there wasn’t.)

So I finished ripping the seams on the yoga pants I’m making to get the ready to be sewn together again. No knitting.

We did the dishes and talked and did some laundry and talked some more, then I went to the dermatologist to get the boy’s prescription, to the pharmacy for his medication and then all the way to the supermarket. I had underestimated the amount of groceries we needed and wished I had taken the bike while walking home with my backpack full and two heavy bags pulling at my arms.

Then we made lunch and I hung up the laundry: 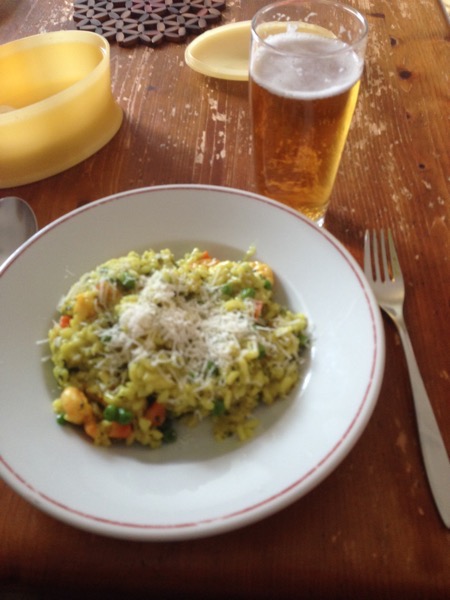 After lunch all my oomph left me and I sat around reading for an hour or so. I did manage to pull the sewing machine out and start sewing the yoga pants together again, so that was good but they aren’t finished yet. Also, I’m running out of thread. I’ll have to get more.

Then there was teaching and bodyweight training and dinner with all of us sitting at the table at the same time, and then the boy helped me with the dishes while my husband went outside to garden some more.

And then I read a bit, brushed my teeth and went to bed almost on time.

Today there will be running because we’ll be going to Vesak tomorrow; I’d love to clean the house as well but that’s probably too much for one morning, then we’ll go to the Greek restaurant for lunch, I’ll see another potential new student and then will teach and teach and teach until the evening.

So, a somewhat busy day ahead.