Woke up around six and lounged in bed until a late breakfast. I finished a sock while my husband was eating, wove all the ends in on my knitted tee and continued knitting on that, did the dishes, talked with the rest of the family and then did yoga. Phew. First time in weeks.

After that it was already time to make lunch and it tasted wonderful. We took the time to try the special beer Eliandhra had gotten us from the craft beer day in Hamburg, Strong Ale with fresh hops by von Freude: 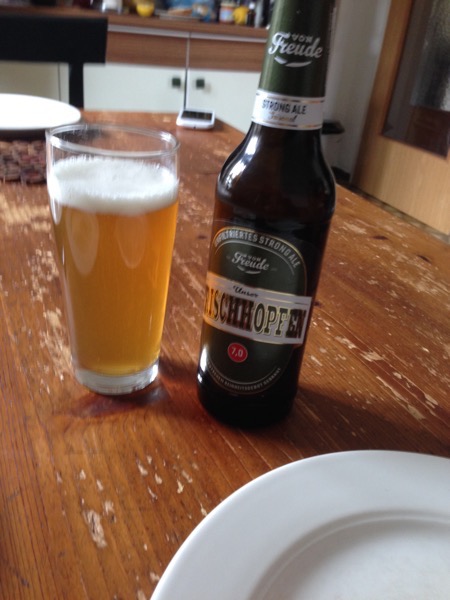 Very fruity, rather strong, I really liked it. And it went with the food pretty well: 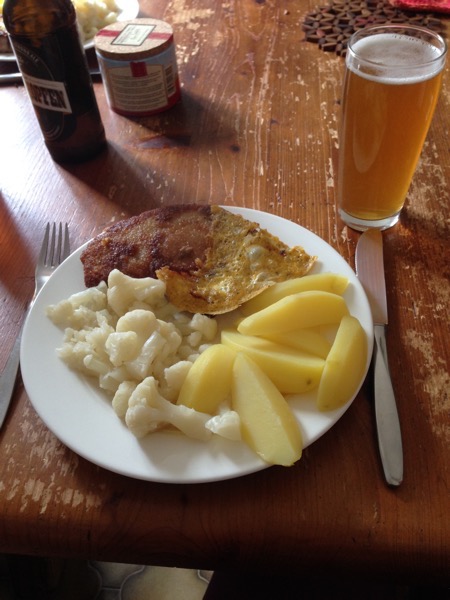 That’s a pork cutlet, by the way. We talked about Bartok and the Fibonacci sequence and spirals in knitting at the table, as one does.

I managed to do the dishes right away and the boy helped and then I surrendered to the slump. Which made me cranky. I opened the novel for the second time that day, stared at it and closed it again, this is driving me crazy. I read a bit about running and mental health and then I spun a bit of Targhee. I later went and found the rest of that fiber and I’ve only spun about ten grams so far. For a project that I started years ago that’s less than stellar progress. The good news is that I finished my main spindle project two weeks ago and this one has now been promoted to main spindle project which will make it go a little faster. At least in theory.

But. Then I decided to at least do something and washed the advent calendar yarn from 2018 and the Malabrigo I spun. After that I went in search of the Plantain tee pattern. I also tried the yoga pants-in progress on and confirmed my suspicion that the pants are way too tight, especially in the legs. Now I need to decide if I unpick the seams and try to make them a little wider or if I put them aside and try again once my legs have gotten a little narrower.

At least I found the pattern for the tee and the burgundy jersey so I cut the pieces for that while watching a bit of the „Tour of Yorkshire“.

And then it was already time for our ritual watching of „Star Trek“. We are still making our way through „Voyager“ and „Deep Space Nine“.

Then it was already time for bed and the weekend was over.

Today there will be running, and podcasting and teaching and all the usual. Plus knitting, of course.