Woke up at six, meditated and wrote morning pages, then breakfast with the boy who had a presentation due.

Since I really wanted to publish the podcast episode that day I started working on it right after breakfast. My husband showed up just when I had finished writing the show notes.

I knitted a bit until he complained that he didn’t have anything warm and wooly to wear which made me remember that his two decent wool sweaters had both been sitting in my mending pile for months. So I pulled out the gray sweater with the frayed neck band and sleeves and the gauge swatch I had made for it, pulled out the frayed edges, looked up the right needle size in my project notes on ravelry and re-knit a few rounds. And voilà! There was a sweater for my husband. Her’s a picture of one of the frayed sleeves: 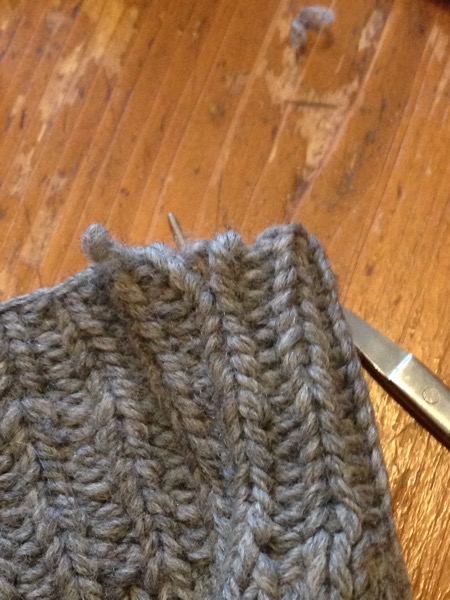 I also pulled out the second sweater whose problem is that the sleeves are way too long, made my husband put it on and marked the right length. That pullover had spent more than a year on the mending pile because I had no idea how much sleeve to cut off.

Of course I can’t just chop the length off, there will be careful snipping of a single stitch, the equally careful unraveling of one row, then I’ll put the live stitches on a needles, unravel what I have cut off and use that to knit a new ribbing. A little advanced sweater surgery. I’m hoping to get that done soon. Two sweaters gone from the mending pile will make it shrink considerably.

Then my husband went running and I decided to get the podcast ready before cleaning. Which ultimately made lunch late. But I managed to get the video ready. Uploading takes much longer on Friday afternoons or evenings than in the morning.

I started cleaning, ended up having a bout of paralysis for no apparent reason but joined my husband in pizza-making later. 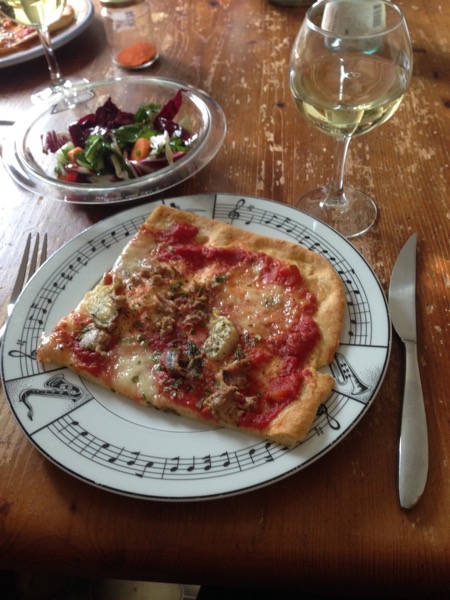 I did the dishes, cleaned the rest, published the podcast, taught quite a few students, watched some Star Trek with the boy, talked to my husband a bit who had been teaching late, read a bit and went to bed.

Not going out that evening had definitely been the right decision, I started yawning some time around 4 pm that day.

Today the boy will go to Munich because there is a thing where people can check out the physics department at the Ludwig-Maximilimans-University. He had planned to go with a friend but the friend opted out. For a brief moment I considered going with him but then I realized that I’d rather do other things with my day. I still need some more time to recuperate and with me wanting to wear more me-made clothes I need to make some more.

On the other hand I’m having so many plans for the weekend that I’ll probably not get anything done at all.

I want to go for a run today and write and maybe sew and make music and will have to deal with mountains of laundry. My husband did two loads while I was away and that plus the clean clothes in a pile need to be folded and put away. And there will be two more loads today, I’m sure.