Woke up from the alarm and read around until it was time for breakfast. Lazy morning, no writing or anything. Very enjoyable.

Then breakfast, then my husband showed up and then we spent an hour or two waiting for the boy to get up. When I finally went upstairs at 11 he was still fast asleep. He had turned his alarm off. Seemed he had needed the sleep.

We did the breakfast dishes, I called my mother on the phone and then it was time to start making lunch. I only helped a little because the Tour of Flanders was on TV. So I pulled out my sock yarn spinning project in progress and watched that. 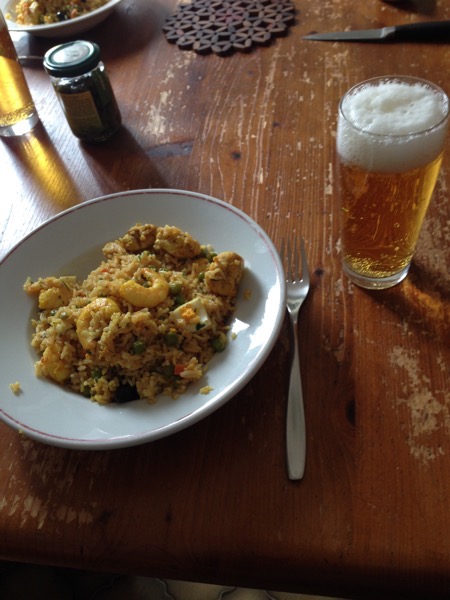 It is our version of  paella. Then I decided to spend the rest of the afternoon with my spinning and actually managed to finish the sock yarn singles and started plying. Productive but not in the way I had planned.

After that I went back to the kitchen for doing the lunch dishes and it turned out that my husband had already done them. Neat. I am rather grateful.

Then I pulled out some spinning books and socks with holes in them in preparation for today’s recording of the podcast and almost got lost in research. Very enjoyable.

Then the boy and I watched some Star Trek and we opened a bottle of champagne to celebrate that we’re done with the renovations and then it was time to get ready for the new week.

My main goal for that week? Getting enough sleep. Mostly.