I woke up from the alarm but did not work on the novel or so any of the things that make me feel good. It’s funny how I keep skipping the happy-making stuff for indulgences that ultimately don’t do anything for me. I’m working on it, though.

I had to get out of bed a little earlier than usual because the boy had to leave for a math-lab-thing at university. We had breakfast and he got ready at 7.30. When my husband came over for breakfast 45 minutes later he looked into the bag with the lone pastry saying, „There’s only one!“ Yeah. „So, what is the boy supposed to have for breakfast?”

He had forgotten that the boy had already had breakfast and left.

We talked about climate change and how people are behaving in a way that dooms us all for the rest of the morning which didn’t exactly cheer me up. Meanwhile I was in a bad mood anyway because of the not-writing. I did the dishes and the usual morning chores while my husband went for his run and I was feeling so down that I almost skipped my run.

Then I decided that skipping the run would not make me feel better at all and went outside. The weather was nice and my podcast was great and everything was fine and I met my husband who was on his way back home: 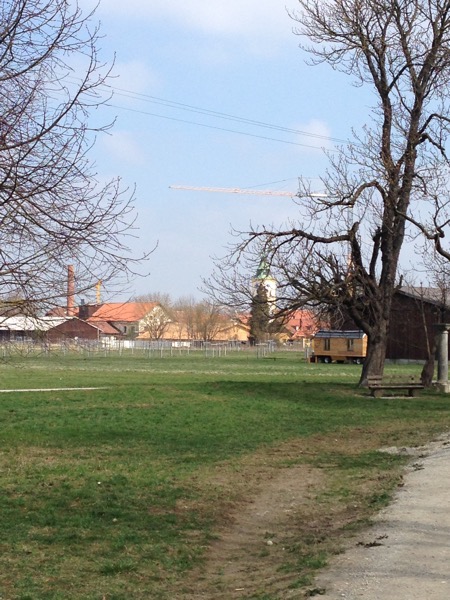 That was my turning point after 4 k. (For those of you being jealous of the idyllic landscape remember that there is an Autobahn behind me, one to the left and a highway going across and the place I’m running is the only piece of woods and fields around. If you pass that church you see a big area that used to be fields but is now warehouses and high rises as far as the eye can see, right up to Munich.

Still, I don’t dwell on the highways, I feast on nature as much as I can while running. I passed trees in bloom on my way home, feels like spring: 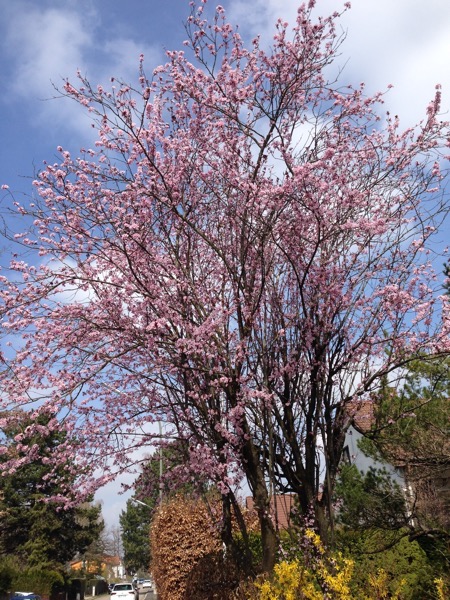 When I came home my husband had just started cooking lunch, and we were a little late with that but it was delicious: 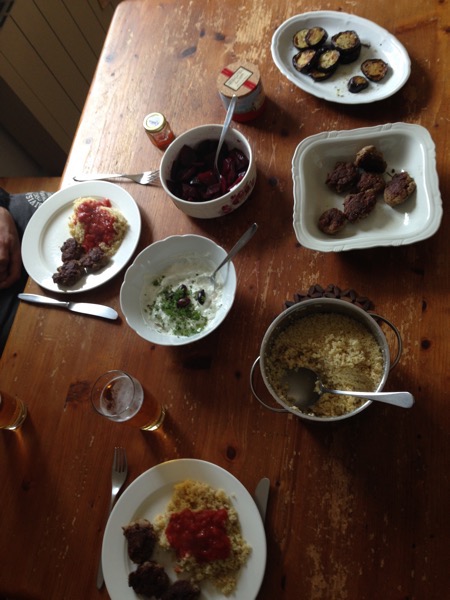 We had bulgur with tomato sauce (lunch was late because my husband initially forgot to make the sauce), hamburgers, fried eggplant, tsatsiki and red beet salad. Pseudo-Greek food. Yummy. Especially if you haven’t eaten for five hours and have just come back from an 8k run/walk.

Then I did fall into a bit of a slump which I used to do some research for my upcoming Hamburg trip but I managed to pull myself out again around four, did the lunch dishes, a load of laundry, changed the sheets on my bed, and then my husband started to mount the new lamp in the kitchen.

Drilling holes into the walls of our house is always tricky. Usually you end up with a hole three times the size that you intended to make that sits nowhere near where you started drilling and is full of pieces of gravel and sand. Same with the lamp. Also, we have these fabulous aluminum wires in the old part of the house. Not only are they not grounded, and aluminum, they also have a textile coating that is starting to disintegrate. So as long as you leave those wires alone everything is fine. But the minutes you start moving the wires around, say, if you want to mount a lamp you’re screwed.

Getting the lamp up involved 2 1/2 hours of work and a lot of swearing. It still isn’t properly fixed, the screws need to get tightened later today but it is up there, pretty level all things considered and is working.

Interestingly the socket we used to power the drill initially worked and then stopped. No idea if that one broke or not. Since the wiring in this part of the house is so ancient there is just one fuse for most of the basement and ground floor but there are weird exceptions. So the washing machine in the basement was still working through all of this. The wifi repeater didn’t which was not the best thing for the poor boy who was talking to his friends over Discord because they have yet another presentation for German coming up.

I did solve that problem by moving the boy over to my laptop in the annex that still had electricity and internet access.

While my husband was swearing and working and needing my opinion and a little hand-holding I did manage to clean the bathroom. So now things are looking pretty good. I also moved some of the yarn back to the bedroom and got a new rug for the bathroom yesterday, one that I really love.

Let’s just say that it might be a good idea to get a new rug if the old one starts disintegrating. I’m not quite sure how old it is but I’d say we bought it some time around 1995.

It took my husband until 7.30 to put the lamp up but then the boy and I watched an episode of „Deep Space Nine“ (a very good one) and then I called it a day. The boy was looking rather pale by then as well.

Now I only need to sort through all the yarn including the one that I moved back into the bedroom yesterday, deal with all the mending and the unfinished knitting and weaving projects and then we’ll be good.

Today there will be yoga, I hope, and writing and my mother demanded a phone call and then I will probably prepare the podcast, write the newsletter (finally) and sort through the yarn.