I had set my alarm to 6.30 because I went to bed so late. That gave me only five hours of sleep. Not the best start into the week.

I got up, realized that I had forgotten to change the water filter the day before, so I made tea with unfiltered water. Had breakfast and started the process of changing the filter when my husband showed up.

We were all optimistic about finishing the renovation stuff the same day. But first breakfast. And then I did the dishes and such while he started another bout of frantic cleaning. Those door jambs that I thought were gray? Apparently they’re white.

When he went back to the bedroom to look at what we had painted before he found again flakes of paint hanging from the ceiling. Small flakes.

So he started scraping them off. And then he scraped and scraped and – well, there was a lot of scraping. Not as much as the night before, though.

So I changed back into clothes without paint stains and rode the bike to the hardware store again. Where I bought primer that was not eighteen years old, a new kitchen lamp and assorted small stuff.

When I came home my husband mentioned that the cucumber we had meant to go into our potato salad was a tiny, limp piece. So I put my shoes back on and went to the nearest grocery store where I bought a non-organic cucumber and some flour. And a lot of chocolate, as one does.

Instead of cleaning or painting I then peeled the potatoes and did a bit of the cooking. In between I changed back into paint clothes and cleaned a bit. And tied peeling fossilized tape off the baseboards.

We had lunch and it was yummy: 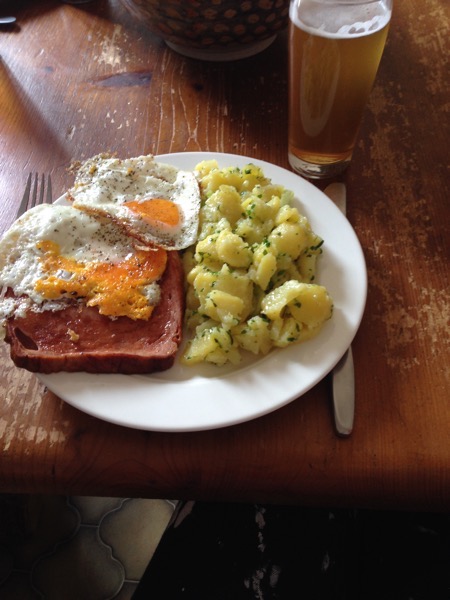 And then I fell into a deep black hole. I did not do the dishes, I ate all the chocolate, and I only half-heartedly pulled some more tape off.

Then I realized that I would need to take a shower, put on makeup and move all the crap that I had put in my studio over the weekend. There was quite a bit of laundry, a weaving loom and a big pile of spare pillows and down comforters sitting there. That wouldn’t do for teaching.

So I did that, taught some students, re-filled my favorite fountain pen, wrote a few e-mails and forum posts (because I’m now officially back online) and waited for the potential new student.

I taught that lesson while being so tired that I could have fallen asleep instantly. I just hope I didn’t give too bad an impression. Teaching a young mother with her baby in the same room was about as challenging as expected. Next time I’ll have to wash my hands beforehand so that I can pick up the baby too.

Meanwhile my husband – who had primed the ceiling again before lunch – painted the ceiling yet again for what we’re hoping will be the last time in many years.

Not early enough that I could enjoy a night in my own bed but I’m hoping for tonight.

I basically fell flat on my face after that. I’m really hoping to get most of the cleaning and some of the furniture moving out of the way today. So no exercise, no health food store, just full speed in getting the house back in order.

Is it the weekend yet?